Labour Party delegates have rejected a proposal that the party drop its plan to raise the age of eligibility for New Zealand Superannuation at its annual conference in Christchurch.

At the last election, Labour campaigned on a transition to raising the age to 67 over time. 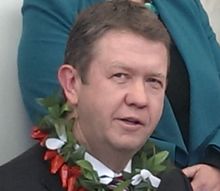 Electorate committees Northland and Coromandel both put up amendments at the party's annual conference in Christchurch on Friday to axe any move to raise the age of eligibility. But after a feisty debate, that was rejected by a substantial vote.

Instead, it was agreed that Labour would consider all options to make New Zealand Superannuation sustainable, including raising the age of eligibility.

Labour's finance spokesperson David Parker says he is happy with the amended policy.

"We've got to a really good outcome. We're given freedom to make the decisions that are necessary to ensure the sustainability of superannuation. That's what we wanted, so we've reached an agreement through our policy process that's consistent with that."

Labour leader David Cunliffe says the change is not a watering down of the policy.

"I think there is some confusion. Our policy platform is a high level in general document and it leaves room for us to fix an age. It indicates the age will rise, but it's not at a level of detail of saying how much, by when."

The policy will be debated by the whole conference on Saturday morning, but David Parker is confident it will be supported.

Other proposals include a move towards a written constitution, the creation of a Pasifika television station and making New Zealand a republic.

Issues also to be discussed include creating a Maori-only list process, and requiring gender, ethnicity, sexual orientation and people with disabilities to be considered when selecting candidates.

Labour Party president Moira Coatsworth says the step is intended to make sure the party is truly representative of New Zealand. However, she is adamant there are no quotas intended for areas other than gender.

Ms Coatsworth says the party will be signing off on its first binding policy platform, so it will be very clear what Labour stands for.

Labour will be hoping to maintain the momentum it picked up during its recent leadership contest. The conference is David Cunliffe's first as leader and gives him an opportunity to make sure the party is united and ready for the general election.

Mr Cunliffe will make his leader's address on Saturday afternoon and a policy announcement on Sunday.