Few changes have been made in the shadow cabinet lineup new Labour leader David Cunliffe announced on Monday afternoon.

Mr Cunliffe says he wants Labour to establish its economic credibility, an area that will be led by three senior MPs. 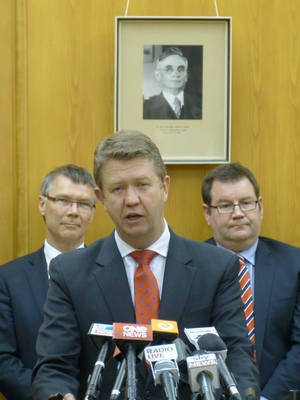 As previously stated, deputy leader David Parker continues to hold the finance portfolio, Grant Robertson will be shadow leader of the House and also gets the employment portfolio, and Shane Jones will be the new economic development spokesperson. Annette King retains health and Chris Hipkins education.

As well as responsibility for intelligence services, Mr Cunliffe takes on the information, communications and technology portfolio, and regional development.

Nanaia Mahuta has picked up treaty negotiations and Sue Moroney social development. Both have climbed two places up the caucus rankings to make it into the top 10.

Two other women MPs, Louisa Wall and Moana Mackey, have been brought into the shadow cabinet, with the portfolios of youth affairs and environment respectively. Carol Beaumont moves into the top 25.

Previous leader David Shearer is ranked 13 and will be the foreign affairs spokesperson.

Dunedin South MP Clare Curran goes from 18 to an unranked position and loses the information, communications and technology portfolio. 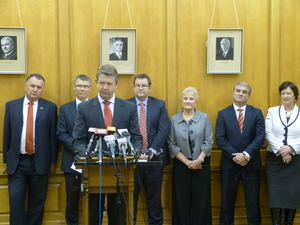 Mr Cunliffe says there are "very, very strong performers", who are ready to take the fight to the Government.

Mr Cunliffe has acknowledged some MPs will be disappointed but says that's inevitable after a reshuffle.

He says it's not possible to promote everyone.

"It's mathematically impossible that everybody goes up all at the same time. There are one or two who will be adjusting and I'd ask that you show some understanding of that process but I have to say that every single colleague has without fail been totally professional."

The remainder of caucus listed by length of time in the House: