David Cunliffe remains favourite in the Labour Party's election race but Shane Jones is the bolter in a 3 News poll, edging his way into second spot. 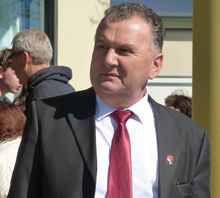 The leadership race - prompted by David Shearer stepping down - had been thought to be between Mr Cunliffe and Mr Robertson but the poll shows Mr Jones to be a serious contender.

"I'm saying to the MPs, this is now a two-horse race - listen to the public. Follow what the public want and the public are saying," Mr Jones told 3 News.

The 3 News poll was conducted from Tuesday to yesterday and has a margin of error of plus or minus 4.4%.