Two of the contenders for the Labour Party leadership have boosted calls for such a wage at campaign meetings over the weekend.

Living Wage campaigners argue the minimum wage of $13.75 an hour is not enough to live on and a realistic living wage is $18.40.

However, Mr Joyce told Morning Report lifting wages to that level would mean cutting between 20,000 and 30,000 jobs.

"The people that would miss out in this situation would be your small business and your regional businesses that actually have a lower cost structure to be able to compete," he says.

"So pushing things up too quickly, much as we'd all like to do that, actually causes problems."

Prime Minister John Key is disputing the figures, saying he would be very surprised if it cost as little as Mr Robertson and Mr Cunliffe estimate.

"When we looked at the minimum wage going to $15 an hour for just Ministry of Health, Ministry of Education, MSD and ACC that alone cost $68 million per year. The second thing is, if they are saying the Living Wage is $18.40 an hour, why should someone get $18.40 an hour because they work for the Government."

The Institute of Economic Research says the living wage is an expensive and flawed concept.

Chief executive Jean-Pierre de Raad says a third of the workforce earns less than $18.40 an hour.

He estimates it would cost about $4 billion a year to bring everyone's pay packet up to the living wage.

"People need to sober up a bit and look at what the cost of the whole thing will be and I think they'd find it would be a real handbrake on the economy," he says.

However, the Service and Food Workers Union says $18.40 is the minimum needed to not only survive but participate in society.

It says the current minimum wage is not acceptable and something needs to be done.

The living wage promises by Mr Robertson and Mr Cunliffe came as they and the Labour Party's other leadership hopeful, Shane Jones, made pitches to members at the weekend to try to win support for their leadership bids. 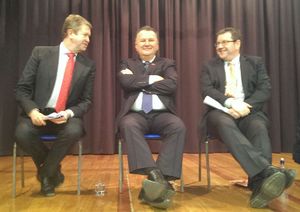 The three contenders for the Labour leadership. Photo: RNZ

The three men attended Labour gatherings in Levin and Auckland, with the next in Whangarei on Monday night.

At Sunday night's meeting in Western Springs, any negativity was reserved for the Government, with the three giving good-humoured speeches that pleased their party supporters.

As well as pledging support for a living wage, Mr Robertson and Mr Cunliffe also promoted a return to the party's working values.

Mr Jones said he could revitalise the party by broadening its support base and bringing in new voters.

With a general election just over a year away, the party has made a conscious decision to try to keep the campaign positive.

Candidates must adhere to a code of conduct and placards and signs are not allowed.