Labour's deputy leader Grant Robertson has confirmed he will be running for the party leadership.

MP for New Lynn David Cunliffe is widely expected to put himself forward, with list MP Shane Jones another possibility. 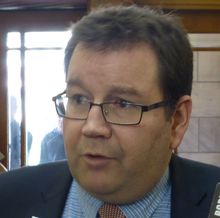 Mr Robertson who is currently deputy leader, and MP for Wellington Central says he's ready for it.

"I think it's going to be a really good contest for the Labour Party, I think if candidates can show respect to each other and to the members and the process, I think this could give us a great spring-board for 2014."

He and the MP for New Lynn, David Cunliffe, are seen as the main contenders for the leadership.

Nominations close at 10pm on Monday, but Mr Robertson only confirmed he would be contesting the leadership on Sunday evening.

She says Mr Robertson's sexuality could count against him if he were Labour's leader at the next election.

She believes a social conservative backlash is building and while Mr Robertson is a fine politician, his sexuality could prove to be a distraction.

But a Labour Party activist says New Zealand should have moved on from worrying about whether or not party leaders are gay.

Pasifika activist James Nokise, who spoke on gay rights at last year's Labour Party conference, says he hopes the world has moved on from homophobia.

He says suggestions that Pasifika voters in particular are concerned about gay politicians is an unsustainable generalisation.

Earlier on Sunday Andrew Little, who had been suggested as a possible contender to replace David Shearer, said he had decided against contesting the Labour Party leadership.

Mr Little, the former head of the largest private sector union, the Engineering, Printing and Manufacturing union, is in his first term as an MP and says he was always an outside chance.

"We need a leader who can immediately make an impact," he says. "I expect there will be at least two contenders, both of whom have more experience than me and who will be able to achieve that."

Mr Little would not say which of those two contenders he would prefer.

Under new Labour Party rules, votes for Mr Shearer's replacement will be weighted so the vote of the caucus and party members will count for 40% each, while five unions hold 20% of the vote.

The results will be announced on 15 September after a series of meetings nationwide.