Nominations are now open for the new leader of the Labour Party and the victor is expected to be announced on 15 September. 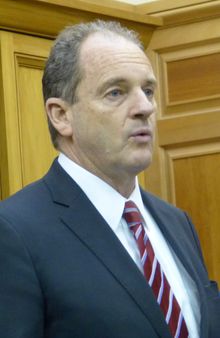 David Shearer announced on Thursday he is stepping down as leader.

Nominations for his replacement will close on Monday night and be made public the following morning.

If more than one MP contests the leadership, the candidates will travel around New Zealand for 10 days in a series of meetings to address members.

Members can vote at those meetings or by post.

Under the party's new rules, the votes will be weighted so the caucus vote will count for 40%, party members 40% and the five affiliated unions 20%.

Mr Cunliffe lost the leadership contest to Mr Shearer in 2011 and won't say yet whether he will try again.

Former Labour leader Phil Goff said on Friday he saw no evidence that MPs were planning a motion of no-confidence against Mr Shearer before his resignation.

Mr Goff said it took a lot of courage for Mr Shearer to resign.

He told Morning Report there was never any discussion in caucus about changing the leader or a notice of motion against Mr Shearer.

Council of Trade Unions president Helen Kelly told Morning Report she was not surprised by Mr Shearer's resignation, but was not expecting it at this time.

She said unions will wait to see all the candidates for the Labour leadership before deciding who to vote for.

Ms Kelly said the unions will want someone who is capable of winning next year's election.

Labour president Moira Coatsworth said party members hope more than one MP will put their name forward as they would like to have a say in who the next leader will be.

The Green Party hopes Labour can resolve its leadership issues before next year's general election.

Co-leader Metiria Turei said it is critically important that the Greens and Labour are working together come the next election.

Former ACT leader Richard Prebble said history is on Mr Roberston's side: as deputy leader, Mr Robertson has already been voted into a position of power by the caucus and has their confidence.

New Zealand First leader Winston Peters said Shearer's fate was sealed three days ago when he and the prime minister argued over a secret meeting they had over the GCSB legislation.

In Parliament on Tuesday, Mr Shearer asked John Key if he or anyone in his office had ever contacted Labour about the spy agency legislation.

Mr Key agreed the two leaders did meet for 30 minutes and said Mr Shearer had asked him to keep the discussion confidential.

But Mr Shearer told the House he was the one who had requested the meeting.

Mr Peters said that testy exchange was a defining moment for the Labour leader. He said Mr Shearer is decent, but not up to being a leader.