The Prime Minister says he rejected an offer from the head of his department to resign over the handling of the inquiry into the leak of the report on the Government's electronic spy agency. 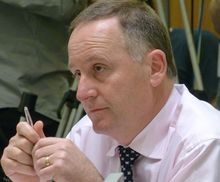 John Key said he is disappointed he was not told until last Friday that emails between Fairfax journalist Andrea Vance and independent MP Peter Dunne had been mistakenly sent to the inquiry into the Government Communications Security Bureau.

However, Mr Key said on Monday he did not require the chief executive of the Department of Prime Minister and Cabinet, Andrew Kibblewhite, to resign over the matter.

Mr Key continues to defend the role that he and his chief of staff Wayne Eagleson played, saying they did nothing wrong and believes the average New Zealander is not hugely worried about the issue.

The David Henry inquiry into the leak of a report into GCSB did not find the person who leaked it, but because Peter Dunne refused to fully cooperate with the inquiry he resigned as a government minister.

Geoff Thorn, the head of Parliamentary Service which provided the emails, quit last week over the handing over of Andrea Vance's phone records to the inquiry.

Despite the ongoing controversy, Mr Key said he does not think the Government is sustaining much political damage.

"It's not an issue that the average voter in the street is hugely worried about. Because I think most of them can see it for what it is, which is actually the inquiry was properly established and David Henry did a very thoroughly professional job of undertaking the inquiry."

However, Mr Dunne says a gung-ho, over-zealous inquiry and a spooked Parliamentary Service led to breaches of his privacy and the disclosure of his emails.

"I have some very severe concerns about how this matter is handled because if you look at the email track that was released on Friday, you'll see in a number of cases involving not just me, not just Andrea Vance but more generally, there was an assumption of approvals being given and a lot of data was sought in advance of the actual approval being obtained for that data being sought."

Mr Dunne is seeking legal advice over the release of his emails to Ms Vance. He told Radio New Zealand's Morning Report programme that no approval had been sought from him before the emails were handed over. He is still deciding whether he will appear before the Privileges Committee which is due to discuss the issue in about two weeks.

Fairfax Media said it would this week lodge a privacy complaint over the release of the emails.

Parliament's Speaker David Carter was forced to apologise last week to Andrea Vance after Parliamentary Service mistakenly handed over her internal phone records to the inquiry. It also emerged that her parliamentary swipe card history was released to the inquiry.

Fairfax Media group executive editor Paul Thompson said although Parliamentary Service is not subject to the Privacy Act, a complaint would be laid against the Department of the Prime Minister and Cabinet, as well as the Prime Minister's Office.