The commission released the report on Friday morning to John Key on the Government Communications Security Bureau Amendment Bill, saying it is overly broad and lacks sufficient checks against abuse of power. 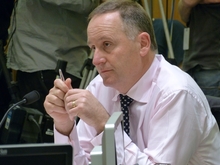 The report recommends that there be an immediate inquiry into New Zealand's intelligence services and that an independent cross-party committee be set up to oversee the GCSB and SIS.

If passed, the legislation will allow the GCSB to spy on New Zealanders when assisting other law enforcement agencies.

Mr Key said on Friday the commission should ask themselves why they failed to put a submission in on time. He said they are funded by the Government and the only people who could not make the June deadline.

Mr Key said most of the commission's concerns have been raised by other submitters, and the Government is confident it has those issues in hand.

But the chief Human Rights Commissioner, David Rutherford, said it was a report on the country's intelligence services, not a submission to the proposed GCSB bill, and the commission is doing its job in using its powers under the Human Rights Act to make a direct report to the Prime Minister.

"We think that we are doing our job properly in making a report of this nature; we don't do it very often. It's a power that's there and we think that this is exactly the sort of situation when you'd use that reporting to the Prime Minister power."

Mr Rutherford said the commission has huge concerns with that way intelligence services would have unlimited abilities to surveil and collect metadata and believes the GCSB bill restricts basic human rights.

"New Zealanders need to be part of striking the balance correctly between the obvious need for some sort of surveillance in certain circumstances and freedom of expression, freedom of association and freedom of assembly. There's very wide ministerial discretion - and no legislative oversight."