United Future leader Peter Dunne has resigned as a government minister following an inquiry into the leaking of a highly sensitive report into the Government's spy agency.

The inquiry's head, David Henry, says Mr Dunne did not fully co-operate with requests made to him relating to emails between the MP and the reporter to whom the report was leaked. 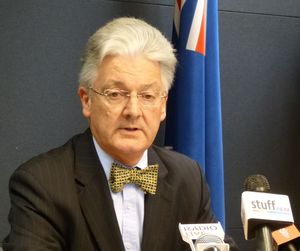 Peter Dunne says some of his actions after he got the report were extremely unwise. Photo: RNZ

Prime Minister John Key ordered the inquiry into illegal surveillance and the current operations of the Government Communications Security Bureau (GCSB) by Mr Henry, a former senior public servant, after Fairfax Media was shown a copy of Cabinet Secretary Rebecca Kitteridge's report in April this year, a week before Mr Key was due to release it.

The inquiry found that Mr Dunne and the reporter exchanged 86 emails during the fortnight before the Kitteridge report was leaked, but that the MP only provided edited versions of 44 emails.

The inquiry says that the reporter also had communication with an officer at the GCSB and a staff member in the Prime Minister's office, but all of those exchanges were appropriate.

Mr Dunne told reporters on Friday he did consider leaking the report, but was unable to give any justification for even considering that course of action. He maintains he was not the source of the leak, but admits that he lacked the judgement reasonably expected of a minister for communicating with the journalist, and that some of his actions after he received the report were extremely unwise.

"This is a situation where crime itself, if there be a crime, is secondary to the possibility being canvassed. In the event, I didn't go through with it."

However, he defended his refusal to release the emails as a point of principle. "Once we start to say that private correspondence to people in official capacities is public property, then I think we start down a very slippery slope. And I for one, having had a long interest in protecting personal privacy, am not prepared to take that step." 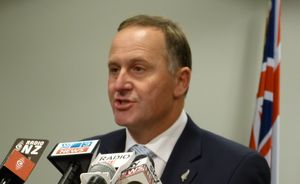 The Prime Minister accepted Mr Dunne's resignation as Revenue Minister on Friday, saying he expected all of his ministers to cooperate, and is disappointed that Mr Dunne did not. He told reporters he received the findings of the inquiry on Wednesday evening and then talked to Mr Dunne.

"I made it clear to him my expectations that he would need to comply with the inquiry. He refused to do so. I said to him it's really as simple as this: that he needed to either comply, or he needed to resign. He chose the course of resignation."

Peter Dunne said he would continue to support the National-led Government with his vote and honour United Future's confidence and supply agreement. He intended to stay on as MP for the Ohariu electorate in Wellington, but would not say whether or not he would seek re-election in 2014.

Labour's deputy leader Grant Robertson said Mr Dunne should have cooperated fully with the inquiry and released the emails.

"He is a minister in a government who is responsible for handling sensitive information. He should answer questions about that when there is an inquiry going on. One of the major problems here is that he was not compelled to give evidence under oath. That is something that John Key could require and should have required of ministers in this inquiry."

Mr Robertson said unless Peter Dunne can clear up the matter, he should resign as an MP.

Fairfax Media said on Friday it is satisfied with the way it handled the leaked report. Executive editor Paul Thompson said the story was a terrific scoop for the reporter and Fairfax on an important issue and he has no concerns about how either dealt with it.

At a news conference at Parliament on Friday, Peter Dunne told reporters:

"I am extremely concerned and upset by the Henry report's findings regarding the unauthorised release of the Kitteridge report in so far as they relate to me.

"While I did not leak the report, and challenge Fairfax to confirm that, some of my actions after I received an advance copy of the report were extremely unwise and lacked the judgement reasonably expected of a minister in such circumstances. I accept full responsibility for that.

"The sole reason that I did not disclose the full content of my emails was because of my strong belief that citizens, be they constituents, members of the public or journalists, ought to be able to communicate with their elected representatives in confidence if they wish, and I think we tamper with that right at our collective peril.

"However, be all that as it may, I acknowledge unreservedly that I have not lived up to the high professional standards that I have always set myself as a minister. I have therefore concluded that I cannot continue to function effectively in these circumstances, given the lapses of judgement I have shown.

"The honourable course for me to follow now is to offer my resignation as a minister. I do that with a very heavy heart and a great deal of reluctance, but I acknowledge there is no credible alternative."

In a statement on Friday, United Future president Robin Gunston said the party would continue to support Peter Dunne for his "outstanding leadership and service" over the years.

There is political pressure for a criminal investigation into the leaking of the GCSB report.

New Zealand First leader Winston Peters said the leak is a serious breach of national security and has asked police to investigate. "This was always about a national security issue and that is deadly serious. It's not about politics, but Mr Dunne can't stay in Parliament, given the circumstances here."

Mr Peters said he is not buying Peter Dunne's claim on Friday that he considered leaking the GCSB report, but did not go ahead with it.

Green Party co-leader Russel Norman said the inquiry into the leak to Fairfax Media does not confirm whether Mr Dunne in fact did it, and police need to investigate and force Mr Dunne to release the emails.

Dr Norman said it needs to be seen whether Mr Dunne has breached the Crimes Act.

A Radio New Zealand reporter spoke to people in Peter Dunne's Wellington electorate on Friday and many said he had made the right call stepping down as a government minister. However, opinions in Khandallah were divided on whether he should stay as an MP.

Some people believed Mr Dunne had served the Ohariu electorate well over many years, but others said he is ineffectual and his only purpose in Parliament is to prop up the Government. Many spoken to also said that while they voted for him in the last election, they won't be doing so again in 2014.