Columbia's president Juan Manuel Santos says he would like to negotiate a free trade agreement with New Zealand.

Following the meeting, Mr Santos told reporters that Colombia is opening up and has free trade agreements with a number of other countries including the United States, Korea and all other countries in Latin America.

"We would love to have a free trade agreement with New Zealand when New Zealand is ready to start negotiations. In the meantime, the more we receive your investment and technology, the better

we would be - not only for this free trade agreement but to continue trading with the world."

Colombia has a population of just over 45 million people and is one of New Zealand's smaller trading partners in terms of value, with just over $13 million worth of exports to the country last year.

However, its economy grew by 5% last year, and John Key is keen for New Zealand exporters to tap into that growth.

Mr Key pledged to support Colombia in a bid to become part of the Organisation for Economic Co-operation and Development (OECD).

The Prime Minister and a 22-strong delegation will next travel to Chile as part of a 10-day trip to Latin America, which also includes Mexico and Brazil. 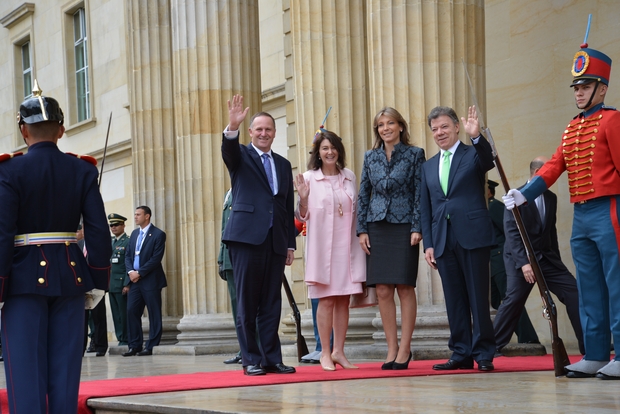