Exporters and manufacturers say they take great offence from Government messages that they need to operate smarter in order to survive.

On Monday, they told a joint inquiry held by Opposition parties that, despite making efficiencies, they are being crippled by the relentless rise of the New Zealand dollar.

The Labour, Green, New Zealand First and Mana parties are holding the inquiry after the finance select committee blocked a request for a similar investigation. They say 40,000 jobs have been cut from the manufacturing sector in the past four years and change is needed to reverse the trend. 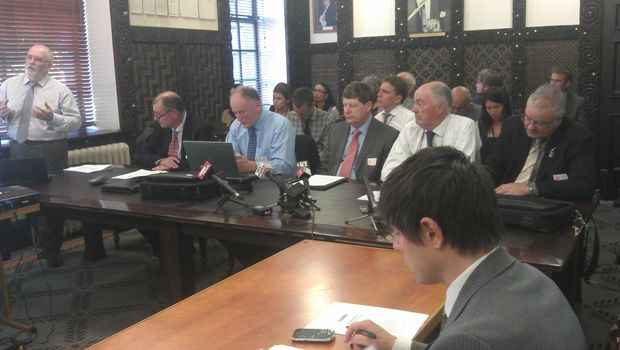 Members of the Manufacturers and Exporters Association address the committee. Photo: RNZ

Submitters range from large hi-tech companies to smaller, agricultural-based businesses. Their common refrain is that despite efficiency and technological gains, the overvalued New Zealand dollar made it increasingly difficult to turn a profit and is one of the biggest threats to their businesses.

Whanganui-based helmet manufacturer Pacific Helmets said on Monday that the value of its product has almost halved in real terms since 2000. Other submitters said they are sick of being told to operate smarter by politicians - when their biggest challenge is beyond their control.

The managing director of a company that makes and exports a device that protects crops from hail stones said comments from the Government that his sector needs to get smarter are "insulting and unnecessary".

Mike Eggers said he is sick of hearing politicians telling him he has to up his game if he wants to survive - when the high dollar makes it more and more difficult to operate.

"We're told to get smarter and I find that irritating and insulting. I'm about as smart as they get in my little field. How the hell do these people get smarter? For a politician to tell somebody else to get smarter - he's risking his life."

A scrap-copper manufacturer told the inquiry the Government can't continue to do nothing about the exchange rate.

A W Fraser managing director Gordon Sutherland said the over-inflated dollar is crippling exporters and it was disappointing when the Government told them to keep making efficiencies to remain viable.

"We know that - we've known that for a very, very long time. Of course we get efficient, of course we try and work as hard as we can to be efficient - it's the only way we can exist. It drives me insane when people say, 'Get efficient'. What do you think we are - idiots? We're not."

Keith Whiteley, managing director of Hamilton Jets, which makes and exports high-speed water jet units, told Monday's hearing that the Government's single monetary policy goal of targeting inflation alone was relevant in the 1980s when inflation was out of control but has passed its use-by date.

"Exchange rate considerations must become part of the mix. We are not looking for a massive downward adjustment in the currency. A New Zealand dollar below US75 cents and €55 cents would enable us to remain competitive."

Exporters said New Zealand businesses do not compete on a level playing field with other exporting nations - and if nothing changes more manufacturing jobs would be lost.

Economic Development Minister Steven Joyce says the Opposition parties' inquiry into manufacturing - effectively talking up a crisis - is not helpful.

Mr Joyce said on Monday that times are tough for all businesses.

"But going around and trying to talk down the New Zealand economy and talk about a crisis in manufacturing, I don't think is particularly helpful."

Mr Joyce said there was no simple answer to the problems the sector are facing, except to keep working hard to further improve their businesses.