The Labour Party says ACC Minister Judith Collins should be removed from her role, but the Green Party says she should stay and see through promised changes.

The casualty list at Accident Compensation Corporation grew on Wednesday, with the resignation of chief executive Ralph Stewart.

It comes a day after Ms Collins announced that ACC board chair John Judge would not be re-appointed and will be leaving at the end of June. The corporation's deputy board chair John McCliskie and director Rob Campbell are also leaving. 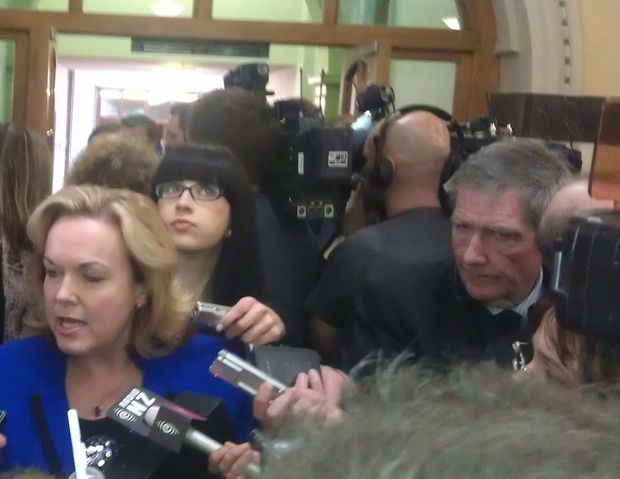 Judith Collins says she is leading a culture change at ACC. Photo: RNZ

ACC has been embroiled in controversy over its dealings with claimant Bronwyn Pullar, who was mistakenly sent personal details about thousands of other clients in December last year.

Mr Stewart had been chief executive for nine months and issued a statement to staff on Wednesday, saying the departure of John Judge and a number of directors has brought him to the point where he has decided to step down.

He said he was deeply frustrated that the benefits of the ACC scheme and the work of staff has been overshadowed by recent events. The statement said he would keep staff informed about the appointment of a new chief executive and ensure there is a smooth transition.

The Labour Party said on Wednesday that ACC Minister Judith Collins is ultimately responsible and a new minister should be appointed to lead changes at the corporation.

ACC spokesperson Andrew Little says the organisation is in deep crisis because of government policies to cut costs and be obstructive to clients, and Ms Collins should also go.

"John Judge and that board only ever did what they were told. They were told to run ACC that way; they've done that, it hasn't worked. The organisation is in crisis so a change is needed - not just at that level, but at the ministerial level as well.

But Judith Collins rejected that, saying she is leading a culture change at ACC.

"I have met some fantastic people and I've been really impressed with their professional attitude. But, actually, the culture of an organisation starts with the top and I expect the board to set the example that I want to have for ACC. I have no idea why anyone wouldn't want to agree with that."

Following Tuesday's announcement that Mr Judge was leaving, the Green Party said problems at ACC were so serious that staffing at all senior levels, including the board and management, should be reviewed.

However on Wednesday, the party said it will give Ms Collins a chance to make changes.

ACC spokesperson Kevin Hague says he is hearing the right things from the minister.

"She has seen the back of John Judge. She is saying that ACC's privacy management processes are completely unacceptable. And in the last 24 hours she's been talking about the need for culture change."

ACC board chair John Judge says no one on the board asked Ralph Stewart to resign as chief executive.

Mr Judge told Radio New Zealand on Wednesday he had told Mr Stewart to stay and did not know that the resignation was coming.

He says Judith Collins did not ask him to put pressure on Mr Stewart and he believes the resignation is a huge loss to ACC and the country.

Mr Judge says the privacy breach behind the current furore happened in August 2011, before Mr Stewart began as chief executive the following month.