Ms Parata, says she takes full responsibility for the backdown, but Mr Shearer says he is worried the u-turn was made as a result of pressure from parents, rather than for educational reasons.

He told Checkpoint that he respects Ms Parata for taking the blame and doesn't feel she should necessarily resign.

Mr Shearer says the Government has lost credibility in the education sector.

Ms Parata has faced criticism from parents and the education sector for the controversial plan to increase the student to teacher ratio for some school years.

Earlier this week there was an unprecedented meeting of organisations within the education sector calling for the Government to back down on the reforms. 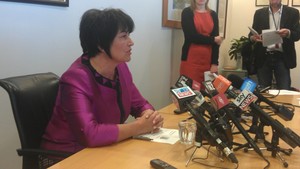 On Thursday Ms Parata announced the Government had heard the concerns of parents and was reversing its Budget plan to change the teacher-student ratio.

"The buck stops with me," she told journalists.

A meeting late in the morning of senior ministers, including Prime Minister John Key, accepted a recommendation from Ms Parata to abandon the proposal.

She says the matter simply wasn't worth the "disproportionate" anxiety it was causing parents, and the decision was to put the minds of parents and teachers at rest.

But the backdown will cost the Government $114 million over the next four years and Ms Parata says the Government make up that shortfall from other savings in the education budget.

Government says it is focused on raising student achievement and improving the quality of teaching and previously claimed this could be achieved through re-investing savings made from changing class ratios.

Parents say they are pleased by the backdown.

A Wellington father of three, Mathew Manninen, demonstrated against bigger classes and says the policy was never popular with parents.

Mr Manninen says Ms Parata, must learn from her mistakes but she should not lose her job over the u-turn. He would like class sizes to be even smaller than they currently are.

Mr Walsh says the Government made a mistake in proposing larger class sizes, but the Minister should not resign.

Another teachers union group says the backdown could be a political move.

Association of Intermediate and Middle Schooling president Gary Sweeney, told Checkpoint he believes polling and what MPs had been hearing in their electorates was probably factored into the reversal.

Quality teaching is still worth examining, says Mr Sweeney, who doesn't believe the Minister should stand down from her portfolio.