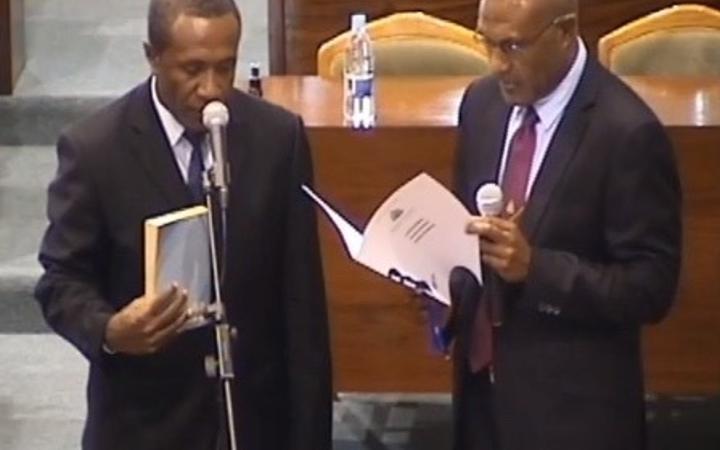 Vanuatu Speaker seeks legal advice on parliamentary positions, the US plans a major spend on defence capability in Guam and Fiji to trial tsunami sirens in wake of regional alert.

Gracia Shadrack said he was also looking into the positions of Opposition Whip, Leader of Government Business and Government Whip.

Shadrack said positions had been filled by MPs up until now despite there being no provision under the law.

Vanuatu Daily Post reported advice was being sought on whether the positions were constitutional or not.

The Speaker made the announcement when he was addressing Leader of Opposition, Ralph Regenvanu, on the appointment of a new Opposition Whip.

US Department of Defense plans big spend in Guam

The United States Department of Defense is planning a major spend on defence capability in Guam.

In its submission to Congress this week it has outlined plans for a $US1.6 billion dollar integrated air defence capability in Guam as a priority for the Indo-Pacific Command.

The Indo-Pacific Command's full strategic plan for the region would cost $US27.3 billion, according to Admiral Philip Davidson.

Defense News and Breaking Defence reported the proposed spend was to boost deterrence against China.

The air defence system would also include a high-frequency radar system in Palau.

A Fijian seismologist says a tsunami test scheduled in the country today will go ahead even as the region moved out of a real tsunami alert.

This comes amid a tsunami advisory for the Pacific region following a second major earthquake off New Zealand's Kermadec Islands this morning.

Sakaraia Malodali said there was no immediate threat to Fiji's coastal communities, authorities were monitoring the situation.

He said the tsunami siren tests were important and there was a need for more of them across Fiji.

"We only have 11 at the moment along the Suva corridor. We are liaising with the NDMO to extend the tsunami sirens throughout the Fiji group. This is normally tested on the 5th of every month so we'll test these sirens today."

The last time Fiji experienced a tsunami was in 1953 when five people died and the Suva harbour suffered extensive damage.