Nations and territories around the Pacific have cancelled or downgraded the tsunami advisory issued this morning, following a second major earthquake off New Zealand's Kermadec Islands, but locals have been told to remain vigilant.

The magnitude 8.1 earthquake struck around 8.28am NZ time at a depth of 10 km, triggering an alert for much of the south Pacific region. 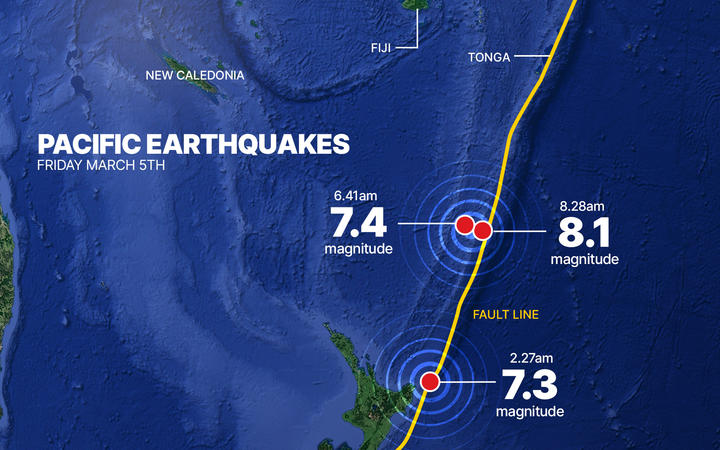 The Pacific Tsunami Warning Centre said hazardous tsunami waves were possible within the next three hours along the coastlines.

Waves reaching one to three metres above the tide level are possible along some coasts of New Caledonia and Vanuatu.

Waves reaching 0.3 to 1 metres above the tide level are possible for some coasts of French Polynesia, the Cook Islands, Fiji, New Zealand, Pitcairn, Solomon Islands, Tonga, Wallis and Futuna.

The Samoa government said a tsunami watch has now been cancelled.

It has advised that it is now safe as the threat is over.

The #TSUNAMIWATCH previously in effect for Samoa is now CANCELED.

In American Samoa, has downgraded its tsunami warning to an advisory but officials said residents should continue to follow the previous order to evacuate to higher ground until the all clear was given.

Schools had been evacuated as soon as the tsunami warning was issued.

Tongan authorities have cancelled the Tsunami Warning that was in force this morning the 8.1 quake off the Kermadecs.

It said due to the wave being less than a foot it was deemed there was no longer a threat posed to the kingdom.

However the office warned oceans currents may still be strong and erratic, so caution should be exercised.

The Tsunami Warning for the Cook Islands has now been downgraded to a Tsunami Watch.

Indications from other monitors around the Pacific show very little impact from the morning's earthquake that was centered in the Kermadec Islands earlier this morning.

The wave pattern was expected to reach the Cook Islands this afternoon but only showed slightly elevated tidal levels were seen.

The Prime Minister, Mark Brown, and his deputy held an emergency meeting with disaster agencies, police and weather services which resulted in the decision to downgrade the warning.

The Met Office said it would monitor marine activity for the next few hours before they give a final all clear.

The Mineral Resources Department said its assessment had verified and confirmed that the all clear could be given.

However in a statement it said the public should now await instructions from the National Disaster Management Office before returing to low-lying or coastal areas.

It also said people should remain vigilant as aftershocks were still expected from the 8.1 magnitude quake off the Kermadecs which triggered the initial tsunami warning.

Wave activity had been noticed in Suva this morning.

The Vanuatu Meteorology and Geo-Hazards Department has issued a tsunami Advisory number 1 for Vanuatu.

It said an earthquake of this size has the potential to cause a small Tsunami waves that could reach 0.3 to 1 meter that can strike the coastlines.

This includes immediate evacuation from coastal areas to higher grounds. People in the areas mentioned are advised to listen to all Radio Outlets.

Normally placid Port Vila bay. High tide and storm surge from a passing cyclone made it hard to see, but the ocean did rise noticeably for a few minutes. pic.twitter.com/qfOylrLgnb

The Direction of Civil Security, Alexandre Rossignol, told local media that a wave of one to three metres could impact the whole of New Caledonia.

He noted this was a "real threat" because the wave could "penetrate the land ".

He said people must leave the beaches and stop all nautical activities, althought children must not be picked up from school so as not to create congestion.

Meanwhile, French Overseas Minister Sébastien Lecornu said in a tweet to follow "minute by minute the situation in our Pacific territories with the prefect of Wallis and Futuna, and the High Commissioners in New Caledonia and French Polynesia".

Lecornu added that "the coastal areas at risk have been evacuated" and called "everyone to be vigilant".

The director of civil security in New Caledonia, Colonel Frédéric Marchi-Leccia, recalled in a tweet that it was not necessary "not to decrease the attention in the face of a tsunami."

"The instructions and security measures have been launched to the population," he said.

No tsunami threat in CNMI

Governor Ralph Torres took to Facebook this morning to announce that there is no tsunami threat in the CNMI following the magnitude 8.1 earthquake that struck New Zealand earlier this morning.

The Pacific Tsunami Warning already issued a tsunami warning in the Pacific.

While there is tsunami warning in the Commonwealth, Torres said residents of the CNMI are advised of minor sea level fluctuations in the region and asked them to be cautious in the islands' waters through this afternoon.

"We will monitor and work with our regional partners to post updates accordingly," he said.

Our correspondent said the Pacific Tsunami Center had earlier issued a tsunami warning for Guam and the CNMI.

#BREAKING: A tsunami watch for Hawaii has been canceled after the Pacific Tsunami Warning Center determined a strong quake off New Zealand posed no threat to the islands. #HNN pic.twitter.com/2T0XLsxX12

New Zealand authorities have already directed people on the East Coast of the North Island from the Bay of Islands to Whangārei, from Matata to Tolaga Bay including Whakatāne and Opotiki and Great Barrier Island to move immediately to higher ground.

The advisory follows an earlier 7.4 magnitude quake in the same area.

That event occurred at 6:41am New Zealand time, at a depth of 10 kilometres.

The earthquakes off the Kermadecs follow another large quake in New Zealand waters this morning off the North Island's east coast.

The 7.1 magnitude Te Araroa quake at 3:15am caused evacuations along much of the North Island's east coast.