All of the passengers and crew that were on board an Air Niugini plane that crashed into a lagoon in the Federated States of Micronesia are reported to be safe.

The Boeing 737-800 was scheduled to stop in Chuuk on its way from Pohnpei to Port Moresby. The airline reports the plane was carrying 35 passengers and 12 crew.

"It was supposed to land but instead of landing it was 150 yards short and she went down," Jimmy Emilio, general manager of Chuuk Airport at Weno in Micronesia, told Reuters by phone.

"We don't really know what happened ... people were rescued by boats - 36 passengers and 11 crew were all rescued, only the plane is sinking right now," he said.

The Boeing 737 aircraft hit the lagoon surrounding the small island about 9.30am local time, Mr Emilio said. The passengers and crew were taken to hospital but no serious injuries were reported.

No casualties. 35 passengers of #AirNiugini flight to #FSM that crashed into the sea in Chuuk have been evacuated to safety and taken to hospital. The flight was landing. pic.twitter.com/5nTOQZpin8

RNZ Pacific's correspondent Giff Johnson said small boats quickly went out to help rescue passengers from the plane before it sank in the waters off the runway in the Chuuk capital, Weno.

"It clearly wasn't a crash, in the sense of a plane going down and coming apart. The plane seemed to be intact and that fits in with landing on the runway and then shooting off which we've had some experience with, with other airlines."

Air Niugini Flight 73 was scheduled to take off at 9:55 a.m. from the airport on Weno island in Chuuk state, in the Federated States of Micronesia. It , was bound for Port Moresby in Papua New Guinea, news report from the Guam Daily Post pic.twitter.com/YVwnhQFIqS

All through Micronesia generally runways are short, according to Giff Johnson, who's based in the Marshall Islands capital, Majuro.

Air Niugini in Port Moresby was not immediately available for comment. A spokesman for Papua New Guinea's Accident Investigation Commission said investigators would fly to the scene as soon as possible to piece together what happened.

In 2013, all 101 passengers aboard a Lion Air flight that overshot the runway at Denpasar in Indonesia and landed in shallow water were similarly rescued by boats without casualties.

According to reports it came to a rest with its nosewheel in the water of the lagoon at the end of the 1800m runway in May 2008. 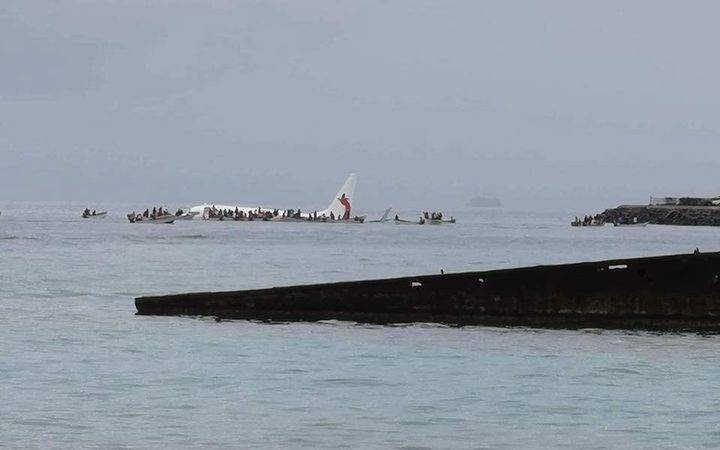