Police opened fire on students at the University of Papua New Guinea ahead of a planned protest, a student leader says. 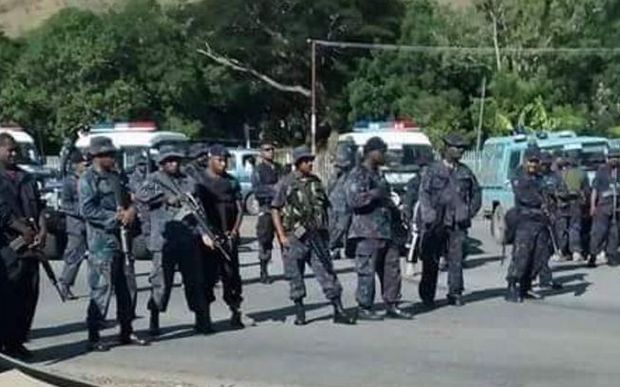 Gerald Turumanu-Peni told RNZI the students who were targeted were trying to stop the student president being arrested.

Reuters reported four fatalities but police said no deaths had been reported, though they confirmed eight students had been injured.

"There's reports of deaths and people in ICU and all the rest of it, that is incorrect. Our executive dean of medicine has been on site in the hospital," he said.

"There has been nobody killed, there is nobody in intensive care from gunshot wounds. The only thing that was fired was tear gas."

About 2000 students had boarded buses to take them from the university's Waigani campus to the gates of parliament.

The students had planned a rally to show their support for a vote of no confidence in the government, which was expected to be tabled in the house today.

Police stopped the buses from leaving the campus and ordered the students to disembark, Mr Turumanu-Peni said.

"There was no commotion. We didn't carry any weapons whatsoever. They wanted to arrest the president. The students, we shielded the president and they started firing shots," Mr Turumanu-Peni said.

"There was no warning shots, they fired straight at us. We were just five to ten metres away from them."

Police pursued fleeing students onto the campus and shot at them as they sought shelter in their dormitories, he said.

Police had formed a perimeter around the Waigani campus, and frightened students had congregated together in the university's Forum Square, he said.

Public Mourning has begun for #UPNG students, melanesian way with Mothers leading as Business and Schools shut down. pic.twitter.com/ODU7FylDY9

Papua New Guinea social campaigner, Noel Anjo, who said he saw the police taking action against the students outside the campus, predicted civil unrest in the wake of the shooting.

Mr Anjo said police had yelled abuse at the students and fired indiscriminately at them, resulting in chaotic scenes.

"There's civil unrest likely to take place. All the market places, all the shop... they're all closed, closing. And places are sending workers home and students are planning the next course of action and are gathering at the forum square now."

The students have been boycotting classes since the beginning of May, while demanding Prime Minister Peter O'Neill stand down to face corruption allegations.

Parliament, which was due to sit today, has been adjourned until August.