First Person - RNZ's new podcast Let's be TRANSparent is all about demystifying the gender transition process.

Host Joe Stockhausen and his mum Pauline tell how it all started for them. 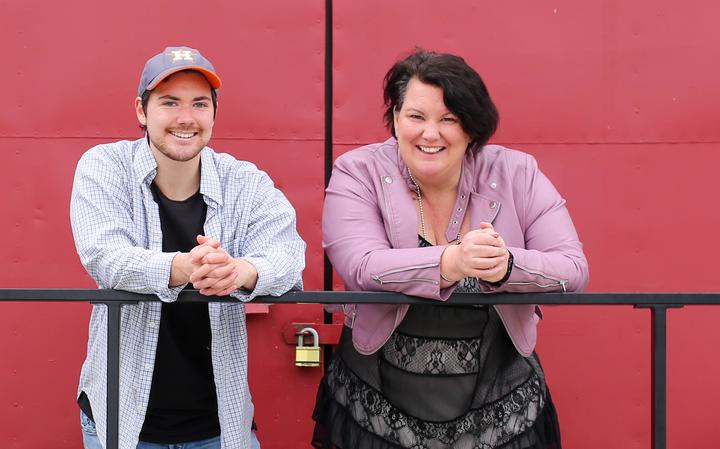 You know when you are driving in the car, it's sunny outside and you are looking forward to reaching your destination, the beach. You're already picturing yourself jumping in the water to cool off and everything is right in the world. The music is softly playing in the background and you drift off into nothingness.

That was me. Blissfully unaware of what was about to happen. My daughter was sitting beside me, she had been singing softly, slightly off-key. To be honest, I hadn't even noticed she had stopped singing until I heard: "Mum, I need to tell you something."

The tone in her voice gave me goosebumps. I shrugged off that feeling, and in a matter-of-fact mum tone answered: "What?".

I was thinking she was going to go into some teenage dribble about stuff happening at school and I'd have to painfully act like I was interested.

She took a big breath and quickly spilled out the words as fast as she could.

My heart lurched. Suddenly everything came into focus and she had my full, undivided attention.

I remember my pulse beating in my neck and a thousand things running through my mind. Did I hear her right? Trans? What the hell is 'trans'?

After dropping the bombshell that I thought I was a boy, I glanced over at mum. I couldn't gauge her reaction. I remember rubbing my sweaty palms on my lap to dispel the nervous knot in my chest. I looked down. Crap. I was wearing a skirt - a frilly skirt. With sunflowers on it. Mega crap. I'm sure I could have picked a better time.

I don't really remember what mum said over the rush in my ears. I had worried for months about this moment, telling her. When was the right time to tell your mum you aren't a girl?

I thought of videos I'd seen online, kids sitting their parents down, handing over a letter and waiting silently while they read it. Waiting to see if they would be getting kicked out or receiving resounding love and acceptance. No way was I doing that!

But as I agonised over how I would break the news to mum, the months had flown by and I couldn't stand it anymore - the pretending. I saw her slowing the car to a crawl on the gravel path, which led to our summer holiday destination.

After months of thinking about how, the plan came together in seconds: Tell her I'm transgender, get out of the car, unload the gear, pretend everything is totally fine, and forget this ever happened.

Mum's response was: "Okay" and something about needing to do her own research.

While I had imagined all sorts of reactions, that was not one of them. It was definitely not the wholehearted acceptance I'd been hoping for.

'Great', I thought, 'she'll look at stuff online, learn about everything, and then ... what?

The reality is that I love my child and always will no matter what. I guess I didn't really articulate that, that hot summer's day, sitting in the car, reeling with the upending of my reality.

It took me a long time to get my head around the fact that my child was trans.

I had to fight myself from putting my head in the sand because all I wanted to do was pretend nothing had changed.

I hoped it was a phase. Not because I didn't accept him and his choices. But because I was scared of all the unknowns.

If you google (which I did) 'coming out as trans' there are pages and pages of horror stories from people who have come out. I don't think I saw even one good story.

It was a scary road to travel on my own and I did feel very much on my own. I knew no other parents who had navigated it before me. There are no rule books to guide you through this.

I found myself making it all about me. What I was going through and how this affected me and that hurt our relationship for a few months.

We stopped talking as both of us were navigating our own paths and when we did talk it ended up with us both being frustrated with each other.

I was ignorant and scared and that slowed the process down. That's something I regret deeply.

I wish I had done more research, found supportive groups online and reached out to those who knew the answers. Because they are out there.

I think I felt ashamed of my ignorance and didn't want people to know my failings.

While I was supportive of him, I just didn't know enough to feel comfortable discussing it with others.

The turning point for us both came after we met with a psychologist who deals with youth who are thinking about transitioning. Lyndon Moore assured me that this wasn't a phase and that my now-son knew better than anyone about his body.

As soon as it was out of the bag I wanted to go full throttle into my transition. I had spent years knowing something wasn't right, months gearing up for a fallout.

In my mid-teens, I had adopted the appearance of any other teenage girl, but I'd had enough.

Enough of trying to be something I wasn't.

I went to school in a girls' uniform in the day, and at night dreamed as a boy - a space hero that used blaster guns and galactic justice. I couldn't be Luke Skywalker but I could transition into the person, the boy, I knew I was.

There was so much I learned from the internet: binders, hormone injections, tips and tricks to make it look like you had facial stubble. But there was no roadmap for how to talk to mum about all this.

I left it alone for (what I thought was) a long time, but then I got impatient, then angry when she misgendered me, and frustrated at her lack of knowledge on all these subjects.

She was on the same internet I was on, right? I assumed she hadn't done any research at all. It affected every other area of our relationship. We just ... stopped talking for a good while.

I decided to take the reins, I shaved off all my hair, bought boys clothes, and went to a GP to enquire about gender-affirming hormones. The latter resulted in the biggest fight we've ever had.

She wasn't mad - she was livid.

We were driving home from school when she just went nuts, saying she found a letter from the doctors, that she couldn't believe I had gone behind her back like that.

I was concerned for my life a little considering she was white-knuckled on the steering wheel, waving the envelope about like a helicopter.

"What were you thinking?" she yelled, demanding she needed more time. She used my birth name, then went quiet. The car was completely silent.

Very awkwardly she apologised and I nodded, "it's okay." Things started changing after that.

We have always been close, it was me and her against the world, only now it is me and blimmin' Luke Skywalker hahaha.

For me, everything fell into place once I got the news that this wasn't a phase for Joe, this was his path. I let go of all my insecurities and trusted the process and more importantly, I trusted him.

Once Joe was on the path to becoming who he needed to be, his transition actually started to take a backseat and everyday life fell into place. When they are not presenting in the body they should be in, it consumes their every thought and everything else becomes a little hard.

We moved to getting to know Joe and it isn't as scary as you think it will be.

I had nightmares thinking that I had lost my daughter and worried I wouldn't know who this new kid would be.

But honestly, they are still the same child you brought up, they have the same characteristics, laugh at the same goofy jokes, still leave their clothes on the floor, eat the ice cream in the middle of the night and have the same silly dance moves.

Really the only thing that has changed is the packaging.

I laugh and tell people Joe has had a full re-brand.

Later that same year Joe was diagnosed with Stargardts, a macular eye dystrophy which means he will slowly lose most of his eyesight.

That diagnosis was harder on us than Joe coming out as trans. It really put things in perspective.

I remember a father calling me as his son had come out as trans and he was struggling so much with it. My advice to him. which he said helped him the most, was "it's really simple, do you love your child?"

The answer was of course "yes" to which I replied, "then why does it matter what gender they are? They will always be your child and their happiness is the most important thing in this world, does it really matter what packaging they are in?"

Throughout this whole transition, both Joe and I noticed a lack of resources, and the ones we found didn't have a lot of real-world context to them. But it took a few more years for Joe to settle in himself before he felt he could talk about his transition without the teenage angst.

And let me tell you, when we discuss those early days, his recollections are not how I remember it.

So an idea formed. A resource for parents, wider whānau, and trans people on this journey to be a part of. And that's why we created the podcast Let's Be TRANSparent.

Our story isn't some great reunification, with dramatic music and redeeming character arcs.

It's a simple parent-child journey with a few bumps on the way. But we hope it helps others take heart and realise that they are not alone, that the challenges can be overcome and that having a child living life as their authentic self is as rewarding as any other milestone parents treasure.