Opinion - Aside from Jordie Barrett becoming the second member of his family to get sent off in Perth, it's looking pretty good for the All Blacks as they head into the most important phase of their season. 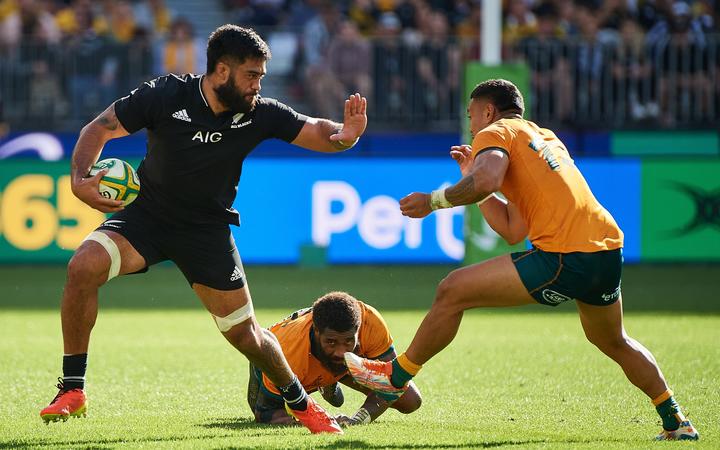 Akira Ioane turned in a man of the match performance in the third Bledisloe Cup test in Perth. Photo: Daniel Carson/Photosport Ltd 2021

The 38-21 win over the Wallabies may not have been the most high-scoring performance of the season but it certainly was the most impressive in terms of guts and brains, not only absorbing the loss of their fullback but even extending their lead in his absence.

This was a game of adaptation and inventiveness from a side that is now clearly playing with its own unique structure and identity. Which is exactly what they'll need when they run into the world champion Springboks in a few weeks, in what is shaping as the most anticipated game of the year.

Let's get the bad stuff out of the way first: despite it being a beautiful day in Perth and not really any wind in Optus Stadium, both All Black kickers had a shocker.

Given that the last time they lost to the Springboks, three years ago in Wellington, was by the barest of margins on a night that four conversions were sprayed wide.

So Ian Foster will presumably be sending Beauden Barrett and Damian McKenzie out for a decent amount of practice this week. Post match Foster was more happy that Beauden had a decent all round game than the kicking woes, however.

Brother Jordie's red card was at least not as bad as Scott's in 2019, and Foster confirmed they will contest any suspension for him when it goes to the judiciary.

If Marika Koroibete had arrived a split second earlier and Jordie hadn't stuck his leg out, it may well have been the Wallaby winger that would have been going for his second early shower of the season.

It's also probably worth mentioning that Michael Hooper's pretty costly HIA break was a result of Brodie Retallick's boot accidentally making contact with the Wallaby skipper's face as well, so there is at least a conversation to be had around that inconsistency.

But the real story of last night was that of the Ioane brothers. The sons of former Black Fern Sandra Ioane (nee Wihongi) have somewhat unfairly always had a slightly suspicious eye cast on them from some quarters, but Rieko has shown that he's got his gas back and Akira has completely bossed his last two test appearances.

Blindside was shaping up as a slightly problematic area for Foster, much like it was for Steve Hansen before him with the ongoing quest to replace the legendary Jerome Kaino.

It seems that the 26-year-old Akira has finally picked up where Liam Squire left off, turning into a lethal threat down the 15m channel at Eden Park and Optus Stadium.

This is what the All Blacks have missed, the big presence acting like a magnet for defenders that creates the space back in the middle of the field.

Likewise, Rieko's role has clearly been redefined as someone who has a license to come in and look for work. Apart from one break where he didn't see an open Will Jordan outside him, his decision-making and handling was flawless.

Both brothers have the look of being parts to be built around and complimented as the All Blacks move into the Springboks' orbit.

More good signs were solid displays from Brad Weber and TJ Perenara, Ethan Blackadder doing his case no harm at all and the All Blacks managing to adjust to losing not only a player to a red card but also their captain to injury.

There are two tests against the Pumas to come first, which will see the squad get a good rotation, but it all looks as though the plan is coming together nicely.