First Person - It began as one notification. I was out in the field at the time, on my way to do interviews. 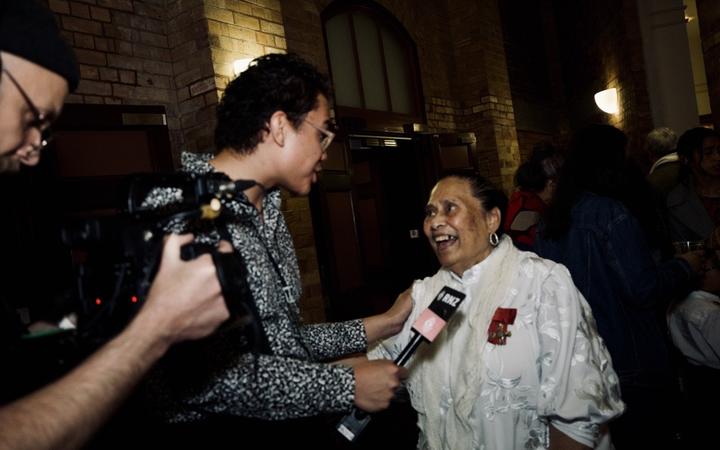 The legendary Toesulu Brown MNZM, who gave RNZ Pacific one of her only interviews at the apology. Photo: RNZ / Marika Khabazi

A deep heave through thick noise; dizzy and teary eyed.

"On way to an interview now and hearing the news of the Dawn Raids apology. My heart," I wrote.

It was leading all the bulletins on the way to the office.

"Trying not to tear up walking away from my interviews. I welcome the apology, but so much more is needed," I tweeted again.

Was I triggered or relieved? Face-palm moment.

Perched back at my desk, I heard Lupematasila Misatauveve Melani Anae being interviewed live on Checkpoint. Every word she said, I launched deeper into mamae I felt and still feel as a Pasifika journalist about the Dawn Raids. About every negative statistic around health, housing, and education - that've become by-products of the neglect of Pacific peoples in this country.

Then there's also this sense of naivety, that I was mourning unseen freedoms. A barge through the door at 3.00am I was never there to witness, or intervene, or fight against.

I first found out an apology was on the cards at the beginning of this year, while working at another news organisation. I heard through the grapevine that a request for an apology was made long ago and talks were in their final stages. The Polynesian Panthers were preparing for their 50th anniversary and it made sense for a long called for "sorry" to be said at that point.

A few months later, I jumped ship to RNZ Pacific. On the day the apology was announced, I filed a quite heavy story about housing deprivation. Then in the weeks thereafter, I began reporting on the Dawn Raids. I was keen, ready and raring to go. My supportive manager gave me the green light to lead our apology coverage and there were no bounds as to what I could report on. But as I'd soon discover, I'd be buckled in for a rollercoaster of emotions.

I was lucky to get a brief 101 on the Dawn Raids during high school, but not many Pasifika learners get even that. Low-decile, high Māori and Pasifika school rolls won't learn as much indigenous history as they are entitled to. Knowing about our tūpuna is a birthright which the curriculum suffices through keyhole-sized Treaty of Waitangi strands.

I talked with my family about the Dawn Raids. Mum remembered being on the bus with Nana as a kid, skirting to the very back because it'd be "disrespectful" not to let Palagi sit in the front. Dogs barking and heavy thuds on wooden doorsteps were etched into Nana's memory about the Raids. As he normally is, Papa was solemn and stoic as we watched back old pictures of men and women being handcuffed.

I heard from the granddaughter of Sione and Setaita Fuavao, the Tongans whose story was on 'The Ugly Reality' poster. She only found out her grandparents had been raided when the Prime Minister's Office came knocking on her door, inviting her to the apology. Mr and Mrs Fuavao who have since died, were taken into police custody; their young sons were left inside their Grey Lynn home for 30 hours. One of those sons was able to overcome their trauma, kept secret for 50 years, recently testified at the Royal Commission Abuse in Care: Tatala e Pulonga inquiry. That 50-year secret lay deep on my shoulders.

I flew down to Parliament to cover the delivery of a petition asking for an apology. There were tears shed, as Māori Party co-leader Debbie Ngarewa-Packer said she didn't want her Samoan mokopuna to forget the fight of their giants. Politicians from across the spectrum agreed in unison that the Dawn Raids were wrong. At the steps of the highest power in the land, power was accepting its own racist past. 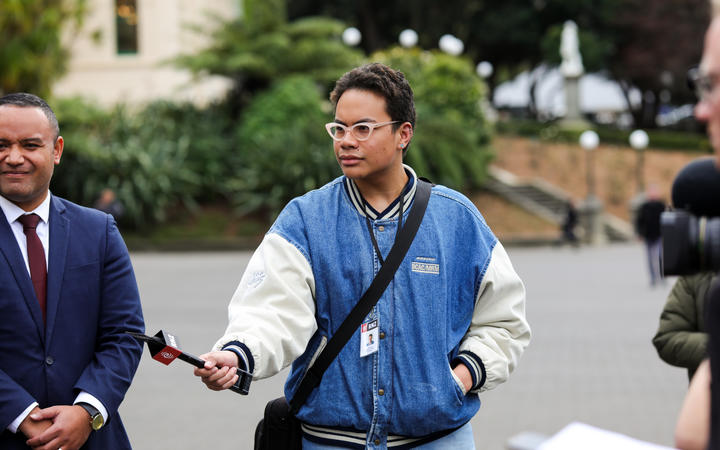 A trip to Te Whare Paremata to witness the delivery of the Dawn Raids apology petition. Photo: RNZ / Daniela Maoate-Cox

Instances like those hit a nerve, and it was hard for me to keep in the tears.

Because here I was, as a journalist, documenting rehashed trauma. I'd look in the eyes of my talent, who told me they were tired. They'd lost count of how many times they had to tell their story. They'd become so desensitised to telling their story and nobody listening. They'd tell me they trusted me with their words. And I felt the weight of responsibility to make sure something was done about it.

It was a promise I made to myself, to do the best job of this apology coverage.

The apology was supposed to happen in late June, until Wellington's plunge into alert level 2. I took the postponement as an opportunity to reshape my reporting of how the Dawn Raids affected my community. I tapped into that lived experience. Stripped it back to the 'what', and 'how'.

Like how lil ol' Dawn Raid Entertainment came to sign the planet's best-selling Pacific music artists. And hello, I talked to Brotha D. Who's not going to take up that opportunity? I also talked to Oscar Kightley for that story, who said it was around that late '90s period we've come to know as the Pasifika arts and entertainment boom, in which this sort of "coming of age" generation came to be. The Dawn Raids went hush after the policy was abolished, and it was people like Brotha D and Oscar Kightley who used their creative knack to break the silence. To be loud about how the raids had long-lasting impacts, in a very creative way.

Then, I set down a wero for the mainstream media of New Zealand: from here on in, please do right by Pasifika. 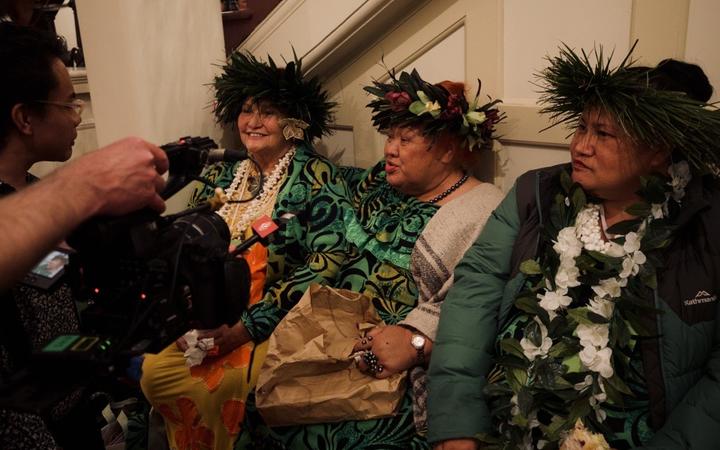 SWIDT's Bunga goes: "…they only love us if it's sports achievements. Siana, see a bungas what they call that, unless you scoring tries for the All Blacks then you kiwi… I'm speechless, they really be calling us leeches. The audacity, but I guess it is warranted, until they need us, bungas."

The Dawn Raids cast a negative shadow on Pasifika in the country's media. Apart from a select few, we were being stereotyped like how SWIDT spits on it.

Because it's not nice when someone who gets to have a prime time radio slot flexes their privilege by describing one segment of the population as "leeches". And they get to keep their job. Decades on from an immigration clamp down that kept children separated from their parents, alone, for 30 hours. People who walked to court in their pyjamas because that's the dignity which was ascribed to them. People who were deported back home, and told even when they go back home, that they're still not enough. And they're leeches too?

I just ask that we steer the ship in a different direction, so we don't have more young Māori or Pacific journalists stumble through an identity crisis trying to tell good stories for their people.

Sunny and hot; the clouds knew to make way for an apology on the day it finally happened.

I admired the karanga at the top, through to the takalo, the pu, pe'e and 'imene. Guests watched with bated breath as the Cook Islands māmā, adorned in their signature 'ei katu, filled the Auckland Town Hall with song.

Many have termed it as a fa'amaualaloga. Others insist it was an ifoga. Regardless, the next moment was a display of reconciliation where nobody in that room could've imagined a Palagi prime minister accepting responsibility in that way. It was something I'll never forget watching with my own eyes. 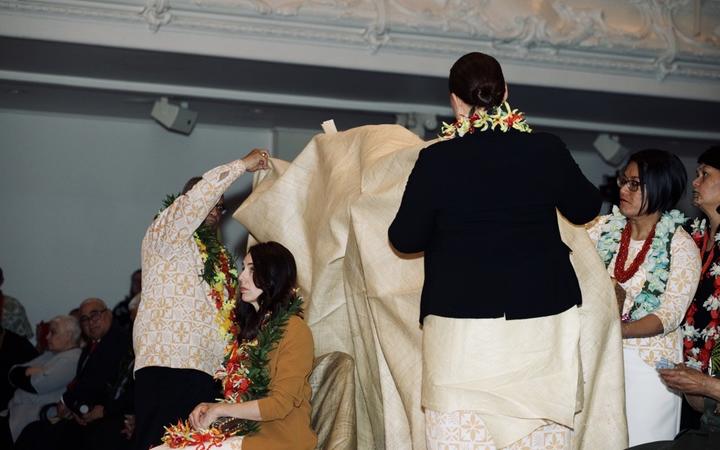 The wails of Anahila Kanongata'a-Suisuiki heard like that of Tongan aunties at funerals.

The most Pasifika MPs ever in a New Zealand government, stationed behind their Pākēha leader as she sat under that ie toga.

Tears and sorries left on the backs of elders who Jacinda Ardern hugged, once the ie toga was removed.

Since the formal government apology for the Dawn Raids, there's been discussion in the Pasifika community of whether it was performative. Some have argued the apology doesn't mean anything if an apology to Māori isn't made first. Just a day after the apology, the government announced it would establish one-way travel for recognised seasonal workers to come to our shores. Many debate the government said sorry only to treat Pacific peoples badly again. Others say the apology doesn't matter and it's how we move forward that matters. 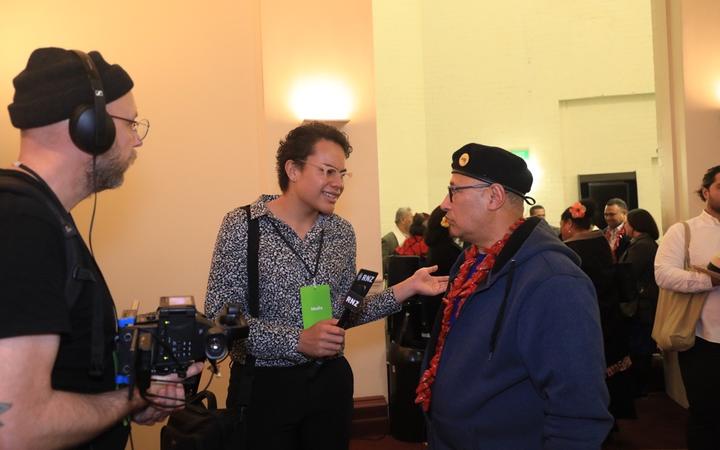 This is a complex discussion to be had amongst ourselves. I appreciate that a lot of Pasifika feel strongly about this apology, for a variety of reasons. In having robust debate, we can all have something to learn. How meaningless this moment would be not to talanoa in-depth about.

Over the past few months, I've discovered aggressions and agonies that were difficult to swallow. As a 20-year-old Samoan-Tongan from Māngere East, my entire world view has changed through the process of reporting on what will be one of the biggest stories of my time.

Scripting my Morning Report package alone took, like, three hours. Tricky to cram a lifetime's worth of learning into five minutes.

Leading this coverage has been a labour of love. For something which I did not live through myself but feel the effects of - I couldn't not do it justice.

There's a saying that goes "a society grows great when the old people plant trees whose shade they know they shall never sit in."

So, I don't think it's yet dawned on me how big this moment truly is.

Perhaps if I keep taking the time to breathe, I'll discover indeed how big it is somewhere along the way.

Or maybe someone else will continue that discovery for me.