Opinion - Two more games of Super Rugby Aotearoa and all we're talking about in the wash up is the officiating. Both had identical score lines favouring two sides that are destined to make up a heavyweight clash this Sunday at Eden Park, but the way they got there was due in no small part to rugby's increasingly confusing reliance on some guy sitting up in a room in the stand. 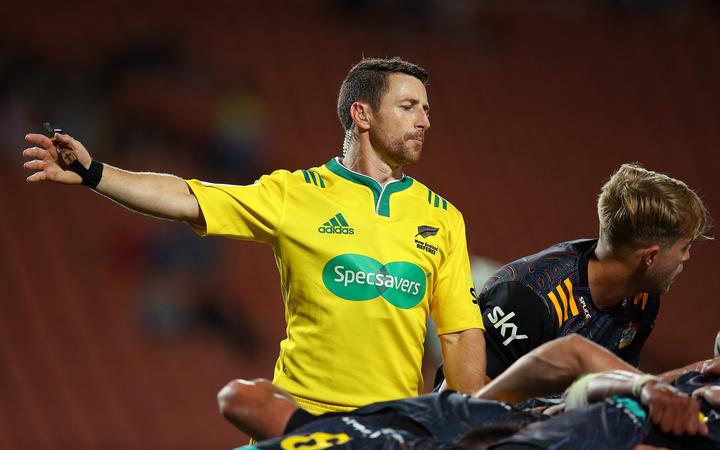 Let's get one thing straight - television match official Paul Williams butchered one very key decision that completely changed the Crusaders-Chiefs game on Saturday night. But it didn't end there, actually it didn't even start there.

The first three tries in that game were all highly debatable, with Damian McKenzie appearing to have committed a double movement, Leicester Fainga'anuku dazzling everyone with a finish so magnificent no one wanted to believe his foot went over the touchline, then the shocking blown forward pass call on Richie Mo'unga that eventually saw the Crusaders awarded a penalty try and Chiefs co-captain Brad Weber sinbinned.

It doomed any chances of an unlikely upset, pulling the wind out of the luckless Chiefs' sails and seeing the rest of the game played out in their territory as the Crusaders got ruthless.

Williams found himself in the Television Match Official (TMO) role during both games over the weekend, pulling up another couple of dubious calls in the Blues' win over the Highlanders at Eden Park - rubbing out a stunning 100 metre effort from the Ioane brothers that would have surpassed Fainga'anuku's for sheer quality (because, by then, photo evidence had emerged showing he was clearly in touch) as he ruled a forward pass, then bringing play back 60 metres because a Highlanders player ran into Hoskins Sotutu's back.

The forward pass rule is now extremely confusing due to Williams' interpretation, Akira Ioane's pass to Rieko clearly went backwards out of his hands, which is what everyone watching presumed made it OK, because the subsequent flight of the ball means nothing under the current laws.

This, like pretty much every other rule with video replay officiating, is where rugby should have bothered to see what rugby league had done - because the NRL has never, in 25 years of having a video referee, deemed it fair to have them rule on forward passes, as every angle you look at will tell you a different story.

It is mind-numbingly stupid that this convention has not been copied by rugby. But the real question is why the normally pedantic Williams was even being called upon to make these calls anyway.

He is a ref, not a TMO. They are two different things and it is understood that Saturday night was the first time he'd ever done it, so his blunder in not waiting for a second angle to show Weber's innocence was because of an obvious unfamiliarity with his new work environment. That in itself is unbelievable.

What's not, however, is the undeniable feeling that the Crusaders are getting the rub of the green on every slightly contentious decision.

Would the Chiefs have gone on and won? We'll never know. Would Rieko Ioane's effort have been the try of the season? Same answer. Will Leicester Fainga'anuku's be since it actually got allowed when it shouldn't have? Guess we'll find out.

Hopefully this week we can get some form of clarification on the clangers that blighted last weekend, because the match between the Crusaders and Blues on Sunday at Eden Park is shaping up to be massive.

The yawn-fest boat racing will be mercifully over, so Auckland's attention can be back on turning up in droves like they did when Super Rugby Aotearoa began last year in the first week after lockdown ended.

A potential crowd that size, plus the one watching on TV, deserves better than the trash we saw over the weekend.