Analysis - In 2015, New Zealand's Parliament was in the middle of a fierce debate to change a part of our heritage, the national flag.

But 110 years earlier, there was an argument over an even more fundamental part of NZ identity. Our name. 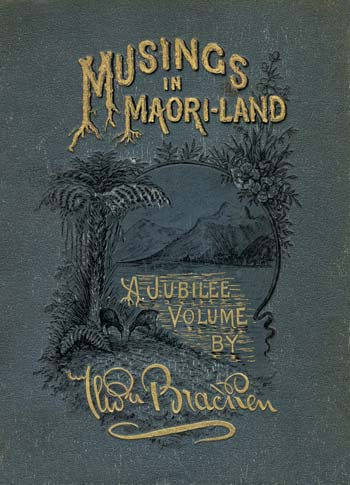 Musings in Māoriland was a collection of poetry by Thomas Bracken, author of NZ’s national anthem. Photo: Supplied / Te Ara

It was 1895 and the radical liberal MP Patrick O'Regan took the floor of Parliament with a proposal to ditch "New Zealand" in favour of a new name.

Although, according to Hansard records, the debate did not get very far.

"Mr O'Regan asked the premier if the government are in favour of changing the present inappropriate name of the colony for the more suitable one of 'Māoriland'.

"[Premier Richard Seddon] thought, for weal or woe, we had better stick to the name of New Zealand, and he was not inclined to change the name."

But if you jumped in a time machine and headed back to the 19th or early 20th century, everybody would know that Māoriland meant New Zealand.

In those days Māoriland was insanely popular as an alternative name for this country. The term appears 73,131 times in Papers Past, a digitised record of NZ newspapers published between 1839 and 1950.

Compare that to just 12,651 hits for 'Aotearoa' across the same timeframe.

And O'Regan wasn't the only one who wanted to make Māoriland the new name of NZ.

About a decade earlier, in 1884, letters had flown back and forth in the editorial section of the Otago Daily Times endorsing a name change 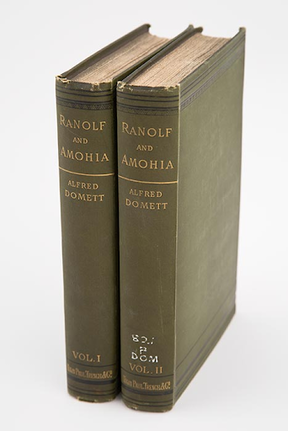 One said: "We have examples in the change of New Holland to Australia, Van Diemen's Land to Tasmania, and I cannot see why we should not follow in the van of progress and change New Zealand to Zealandia, Māoriland, or Māoria, either one of which would not only be more appropriate but also more euphonious."

Another replied: "Three names have been mentioned in your columns as appropriate, but the best of all the three is Māoriland … Māoriland is not only a reasonable name on scientific grounds; it would also please the ear. Where are there finer-sounding names than Sutherland and Switzerland, and Cumberland and Maryland? and with these sonorous tri syllables Māoriland would vie."

Years later, in 1901, people were still discussing the possibility of an official name change in the editorial section of the Lyttelton Times.

"...is not something due to the people who were here before us? Why should the Māori not have his home and our home named after him? I for one do not desire to advocate a change in the geographical name, but will vote straight out that 'Māoriland' be not discarded as this colony's pet name ... MĀORILANDER OR NEW ZEALANDER."

So where did 'Māoriland' come from?

It certainly didn't come from Māori who usually used 'Niu Tīreni' as the name for the whole country (Aotearoa didn't become popular until the 20th century. It did not come from Pākehā settlers either, according to Professor Jane Stafford, co-author of Māoriland: New Zealand Literature 1872 - 1914, the term came from across the ditch.

"Originally it was an Australian term that was a way of describing New Zealand, maybe slightly pejoratively - Queensland was 'Bananaland'. But it quickly became embraced by New Zealanders."

It was most enthusiastically embraced by a group of New Zealand writers. Over the next few decades, the term Māoriland became the centre of a flourishing literary movement.

Searching through Papers Past you can find dozens, maybe even hundreds of Māoriland poems, including this example, Māoriland, Farewell, which appeared in the Evening Post in 1905:

Sweet reflections have I of thee-

Land of my nativity.

Memories fond I have of thee,

Thoughts I'll cherish across the sea,

Land of the Kauri and Rata tree."

Māoriland writing is all like this. Lots of "thees" and "thys" and "Os".

It drips with enough praise for our natural environment to put 100% Pure New Zealand to shame.

And Professor Stafford says that makes sense when you consider who was writing this stuff.

"A group of poets, and novelists, and short story writers at the end of the 19th and beginning of the 20th century who were colonial nationalists," she explains.

Some of these writers are pretty famous. One of the most prolific was Thomas Bracken. He wrote a whole book called, Musings in Māoriland. That book includes a poem called New Zealand Hymn, or as it's better known today: God Defend New Zealand.

And, just like many other Māoriland writers, Bracken wrote a lot of Māoriland poems about actual Māori. Including an 18-page epic on the Ngāti Toa chief Te Rauparaha.

Born to conquer and to lead!

From Hawaiki o'er the sea,

"[Māoriland] became a way of distinguishing New Zealand from the other colonies in the [British] Empire," Professor Stafford says.

Of course, those writers weren't particularly worried about what Māori people thought about the term, or the style of poetry which went along with it.

"It's sort of an act of appropriation," Stafford says.

"Well … not sort of. It is an act of appropriation by settler-writers who claim a past, and culture, and traditions and so on that isn't really theirs but is a part of the land they are settled in ... it's nostalgic for a past the writer didn't actually have."

This appropriation could be pretty blatant. A lot of Māoriland writing involved direct translations of Māori legends and stories into high-victorian verse. But Prof Stafford says it's not all bad.

"It's appropriative, but it's also quite respectful. Some of these writers had very close connections and relationships with Māori society, even spoke te reo."

He authored Ranolf and Amohia: A South-Sea Day-Dream. It is more than 100,000 words long and covers 480 pages.

Dommett's poem describes a forbidden interracial romance between a Māori woman and a shipwrecked European. It's overflowing with exhaustive footnotes and source references on everything from Māori legends to the details of native plants and animals. 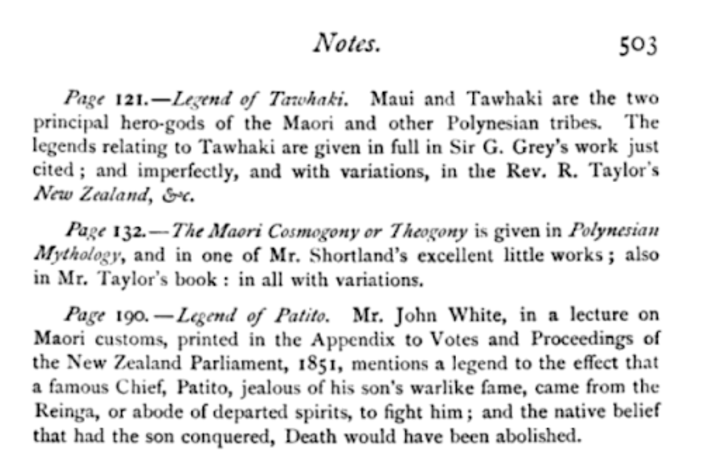 Māoriland writers probably believed they were doing good by preserving Māori oral traditions. There was a widespread view among Pākehā of this era that Māori were a "dying race" who could not survive contact with supposedly "superior" Europeans.

The myth that Māori were a dead or dying race features in a lot of Māoriland poetry, like this stanza from a poem by A H Adams which appeared in the Dominion in 1896.

Her brown warriors' fight is over-

One by one they yield their place,

Peace - slain chieftains of her race!" 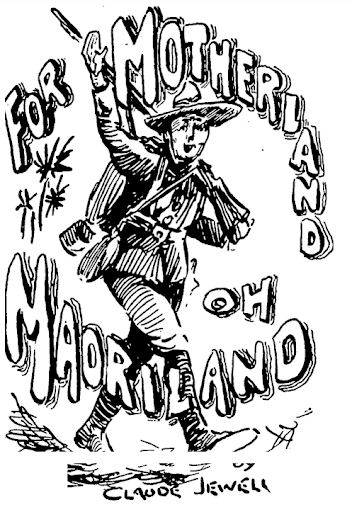 A patriotic cartoon promoting the song “Oh Motherland Oh Maoriland” published in the Observer in 1917. Photo: Papers Past

"Within that group of [Māoriland] writers there were people who were radical and political. There are an awful lot of poems criticising the government's policy towards Parihaka and so on. But the general ethos of Māoriland is archaising. We're putting these people, and this society, and this culture in the past ... we don't actually have to place them in modern New Zealand."

Māoriland writing got a big boost in popularity around World War I.

It featured in pro-war posters and jingoistic songs, like this one from 1911:

"The tyrant's heel is on thy shore,

The Prohibs fierce are at thy door,

Stand up for Freedoms of yore,

Strike down the Prohibs' lying lore,

The Dominion newspaper published this song along with the stern note: "This Patriotic Song should be committed to memory and sung by every truehearted and loyal New Zealander."

To Professor Stafford, songs like this demonstrate the continuing importance of Māoriland to Pākehā identity in the early 20th century.

"I think the war almost reforges ties with Britain in that sort of patriotic, imperial way. But you don't want to be completely absorbed, you still want some sort of distinction. And that word [Māoriland] is a very handy one."

And not all Māoriland poetry from WWI is brash and pro-war.

Some of it is quite reflective and beautiful. Especially the stuff published after the war, like this example, Where, which appeared in the Christchurch Star in 1916.

"Soldiers of Māoriland, where are you sleeping,

Dreamless and still in an alien land,

None whom you love by your graveside is weeping,

As you rest from your toil on that faraway strand."

So if Māoriland was so popular, why is the name still not around today?

Professor Stafford thinks we can blame our most celebrated early poets for that. 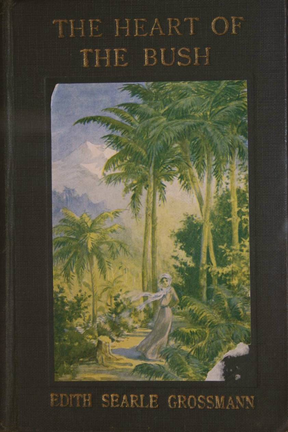 Edith Searle Grossman’s novel, The Heart of the Bush, is a piece of Māoriland writing with strong themes linked to the women's rights movement Photo: NZETC, CC 3.0

Professor Stafford says these men (and they are all men) despised Māoriland writing.

"They liked to think of themselves as the first generation of real New Zealand writers, and so they looked back on that early generation with disdain. They were very rude about them, and contemptuous of them. You know, it wasn't proper literature."

It probably did not help that most of the people who wrote in the Māoriland style were women. In fact, many were suffragists and some of their Māoriland novels, like Edith Searle Grossman's The Heart of the Bush, have themes linked to women's rights.

But Professor Stafford says the likes of Curnow, Glover and Fairburn were not interested in that. "The cultural nationalists in the 1930s and 40s were not just men, but as masculinist as you could possibly be," she explains.

"There's a very sneery essay by the editor of the Sydney Bulletin called The Maidens of Māoriland and what he's inferring is a gendered critique of these authors: that they're all women so they can't be good. That's basically what Allen Curnow was saying in the 1930s as well."

So is it worth trying to rekindle Māoriland? Do we have enough distance from the term's troubled origins to consider it as an alternative name for NZ today?

It has its advantages. It blends the languages of both Treaty partners and acknowledges the deep link this land has to the first people of Aotearoa.

It also symbolises an early, if flawed, appreciation for Māori culture by Pākehā.

So I put the question to Professor Stafford. Does she think Māoriland should be resurrected?

Note: Publications and poetry that used Māoriland did not use the macron, but they have been added for this article because it's not 1920 anymore.