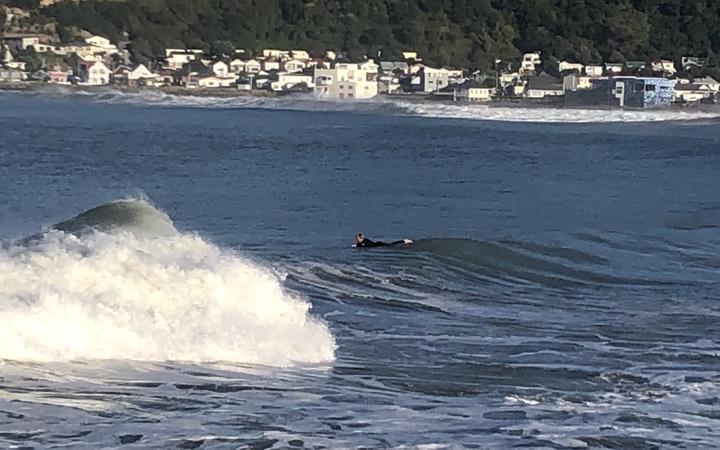 "Mind your own business," the man sitting in the back of the white van is yelling at me.

I didn't really catch it the first time, as my headphones are in. So I stare back rather blankly.

"Mind your own business and keep running," he hollers.

I continue to stand and stare at him. Then I resolve not to mind my own business, hit send on the above picture and skip off.

White van man is parked next to Wellington's Lyall Bay, where the sea is still pounding after yesterday's southerly surge. This is on the same stretch of coastline where freak waves left a person in hospital and forced residents to evacuate their homes.

On the other side of white van man, about 20 metres away, where he can't see them, are a series of people, appropriately spaced, staring out to sea agog. As a poignant reminder we're in a pandemic, one is wearing a face mask.

White van man, me and the others have been watching a person, who must be his companion, attempting to surf in the large swells. I say attempting, because he didn't succeed in catching a wave while I spent five minutes standing there gawking.

All around us, right to the other side of the road, are a reminder of the sea's power - clumps of seaweed, large rocks and silt which has bubbled up through drains.

There's a man picking his way through, collecting some of the detritus for his garden. Behind us, the airport is completely silent. There is no traffic. The cafe 200 metres away is shut. The shopping centre across the road may as well have tumbleweeds rolling through it. No one else is in the sea. The lady with the face mask is still watching. Everything screams this is not normal.

The majority of people are doing their utmost to help stop Covid-19 in its tracks. They're sticking to the rules we've been begged to follow. Yes, this chafes against our natural inclinations but the terrible price of doing differently is not just our own suffering. The greater good relies on each of us doing the right, the sensible thing.

But for some reason Mr selfish surfer and white van man think they get a special pass.

It makes me angry, so I'm not minding my own business.