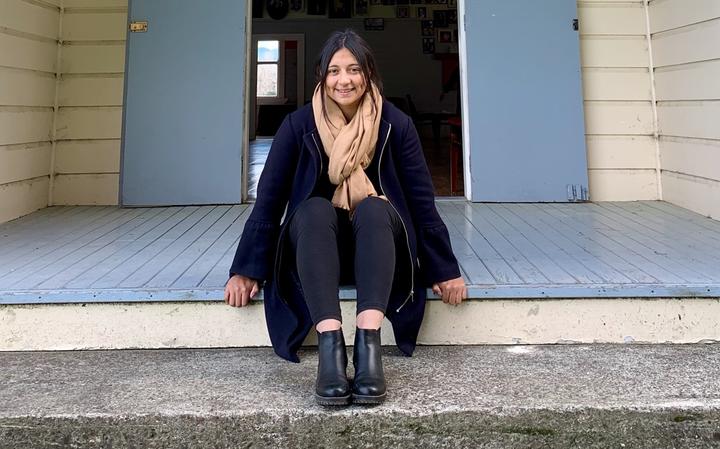 Why did I lose my reo?

That's the question I have been asking myself since I enrolled in Te Pōkaitahi Reo, a full-immersion te reo Māori programme, at the beginning of the year. Answering that question, as it turns out, has required a lot of reflection. Thirteen years ago, te reo Māori flowed from my mouth confidently and freely; I was a fluent speaker. Today, I am not. Trying to understand exactly why has been confronting, but by sharing my journey hopefully people like me, who were lucky enough to grow up with te reo but unable to hold onto it, can know they are not alone.

When I think about my earliest memories of te reo, I think about my dad. He is the proudest Māori I know. The type of guy who only wears 'Haka' brand tops and cuts slits into the sides of his shorts to show off his pūhoro. He has absolutely no shame, and our family quickly became known in every neighbourhood we lived in because dad sung waiata at the top of his voice without a care in the world.

My dad is a talented composer; he's written many waiata for kapa haka and theatre shows around the country. When I was little, he spent his nights recording new waiata in our living room. From the outside, I'd press my ear against the door and listen, memorising every word and quietly singing along with him.

Dad sung waiata during car rides to kōhanga reo, and again years later at my kura when he became a part-time kapa haka tutor. He made te reo Māori the centre of my universe, and I felt so proud knowing it was a passion we both shared.

When my parents decided to start afresh and move our whānau to a new town, they made the difficult decision to enrol my younger brother and myself at a mainstream primary school. We left our familiar social circles where te reo was always present and entered a te reo-absent world. It was overwhelming and lonely, and I struggled to find my footing in this new environment.

On my first day at a new school, my teacher shook my hand and asked me to repeat my name three times before deciding it was too difficult and that she would call me something different entirely. "Tee-ah-nah-wah" became my new name for the rest of the year.

And then came my very first English spelling test. I stumbled over every question because there were words I'd never seen before; half the letters on the page didn't even exist in the Māori alphabet. Handing in that test was nerve-wracking, and I prayed that I'd gotten at least one word correct.

"What is this?" My teacher asked frowning.

My heart pounded in my chest.

"You stupid girl," she said, glaring down at me. "You don't know how to spell the word 'sometimes'?"

The other kids looked at me and laughed. Not knowing what to do or what to say, I wished the ground would swallow me whole but my teacher, who apparently hadn't finished humiliating me took one last stab.

"You have the spelling age of a seven-year-old," she said. I was ten at the time.

Tears welling in my eyes and a lump forming at the back of my throat, I scuttled back to my chair at the back of the room with my head down, vowing that this would never happen again and that soon I'd be like everyone else.

I carried that memory with me every day. It made me resentful, and I blamed kōhanga reo and kura for my incompetence. In later years, when te reo Māori was offered as an optional subject at high school, I never picked it. I could have joined kapa haka too, but by then I was no longer interested.

As I grew older there were moments, glimmers, of that little girl I used to be who loved speaking and singing te reo. At whānau gatherings, where te reo was spoken often, something inside me lit up. I felt it whenever my dad would sing, or when I heard karakia or karanga on my marae. Or every time my older brother competed at the Manu Kōrero Speech Competition and recited our whakapapa in his tauparapara, or performed on stage at Te Matatini. Somewhere deep within, my reo and the desire to speak it again lived on.

My biggest turning point came at university, when I learnt about the history of Aotearoa and the hardships my tūpuna faced. Through their experiences I began to understand what racism looked like, and for the first time in my life I realised how my own experiences of racism had shaped me.

When I completed my journalism degree, I applied for the Henare Te Ua Internship at RNZ, a year-long programme for aspiring Māori broadcasters. Although I'd reached a point in my life where I finally felt grounded in my culture and my identity again, I wasn't confident I'd get the job because they were ideally looking for someone fluent in te reo.

During my interview, journalist Mihingarangi Forbes asked the question, "How confident are you speaking Māori?".

I talked about the girl who loved her language, who grew up at kohanga reo and kura, but who had lost her reo along the way. I was certain that she was going to tell me I wasn't right for the job, but instead she simply smiled and said, "Kei roto i a koe." It's inside of you.

It's inside of you.

And the memories came rushing back; the child perched outside the door listening to her dad sing.

It's inside of you.

And the whakamā disappeared, the 10-year-old finally let go of the cruel words of her primary school teacher.

And I spent the next three years immersed in Māori current events. I watched iwi leaders speak at Waitangi on Waitangi Day and I covered the dispute at Ihumātao. Everywhere I went I heard my language spoken and that small spark within me turned into a blaze and I knew it was time to reclaim my reo.

It means, "adorn your house of language with the words of your ancestors".

And that's where I'm at now, about to embark on a full-immersion te reo Māori programme and I couldn't be more terrified or excited. It's time and I'm ready. I'm ready to uphold the legacy my dad instilled in me at a young age. I'm ready to re-adorn my house of language with the words of my ancestors.

* This article originally appeared on The Spinoff.