Opinion - Want to lend a hand during the festive season but don't know where to start? Don't worry this guide has you covered. 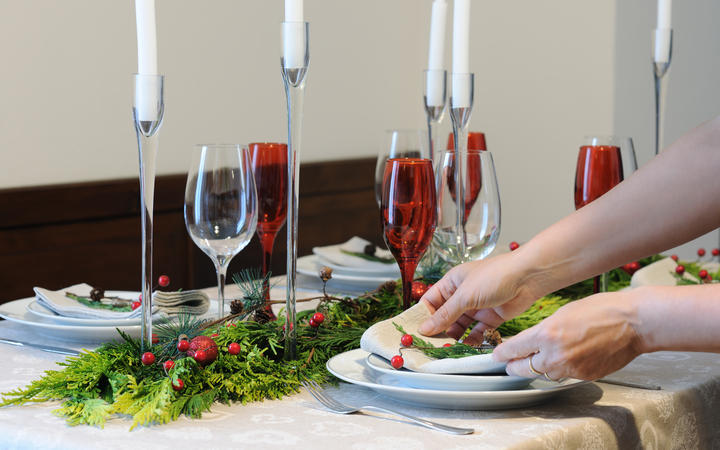 Tasks like ironing tablecloths is useful (even if you don't think so). Photo: 123rf.com

The smooth running of any event requires a Person In Charge (PIC), especially if that event is a family Christmas. If there had been a designated PIC at the very first one, Mary wouldn't have had to give birth in a stable and those visitors would have brought a plate instead of a bunch of useless gifts.

If you're lucky, your family will have a Christmas PIC who shoulders the burden and makes sure the stockings are filled, the ham is basted and that there's no gluten in the gravy lest your cousin's intolerant-to-everything girlfriend accidentally slurps it. The family PIC is (usually) a saint. They may love this role or they may loathe it. Either way, they often do it because no one else will. This is hard and the stress involved can manifest in different ways. Your family PIC may lose the plot when the pavlova sinks. You may find them drinking Baileys in the laundry at 1am on Christmas morning because they were so busy doing everything else that they forgot to defrost the turkey. Worse still, they could be bedridden on Boxing Day because it's the first time they've been able to relax for a month. Sound familiar? Shame on you.

If you'd like to help your family PIC enjoy Christmas but don't know where to start, this five-step guide may help. If you are the family PIC, email it to your family or print it out and stick it to the fridge. Hopefully they'll get the hint...

Do not, under any circumstances, tell the PIC that 'we should just keep it simple this year'. The PIC knows that your idea of simplicity still requires them to shop, plan and spend time and money they may be short on. Instead, keep it simple for them by showing up early.

This kind of showing up early does not mean, 'arrive at the PIC's place before the designated time, expecting to be fed, watered and paid attention to'. It means extending a genuine offer of assistance at least a week before the Big Day, such as, 'do you want me to go to the supermarket/vege market/bottle store for you?' or, 'shall I look after your kids on Christmas Eve so you can get stuff done?'. It may mean offering assistance in other areas, which leads us nicely to step 2.

Are you rubbish in the kitchen? Don't add to the PIC's rising PCT (Pre-Christmas-Tension) by offering to help unless you want to be yelled at like a hapless My Kitchen Rules contestant. Think about what you're good at and do that instead. Tasks like wrapping presents, mowing lawns, hanging out washing, vacuuming floors and ironing tablecloths are all useful (you may think ironing tablecloths is a waste of time, but this is a task that my father-in-law does very well at Christmas). If your talents lie in child-wrangling, see step 4. Being the drinks monitor - especially making sure that the PIC has their drink of choice close at hand - is another useful role, as long as you forget about everyone else as soon as you've had a couple of beersies.

But the first crucial thing is to ASK the PIC what they want you to do. The second is to actually do it, without complaints, sighs or eye-rolls.

Showing up to support the PIC means accepting your place in the hierarchy. If you want the Oscar for Best Supporting Performance at Christmas, you have to earn it. In the meantime, think of yourself as a Marine recruit in a 90s movie. If the PIC asks you to jump, you say 'how high?' Don't rescind your offer to help just because you want to hang around the kitchen and eat chocolate rather than do actual work. This happens all the time to PICs and we don't like fakers. A well-known chef once told me that when her sister swanned in to offer help before a big family do, she asked her to clean the toilets. The sister was most offended because that wasn't the sort of thing she had in mind.

The PIC will have sweated blood over organising the menu, so if you want to help, ask them how they want the potatoes peeled or the turkey stuffed. Notice when the rubbish bin needs emptying or the PIC needs a cup of tea. Otherwise, accept scrubbing the loo with good grace.

Step 4: Think of the children

Christmas and children go together like trifle and whipped cream. However, no matter how adorable the offspring of your extended family are, there will come a point in the day when you will wish for them to be as far out of your sight and earshot as possible. If they have woken up at 4am wondering if Santa has been, this may happen earlier than anticipated. People with adult children are not exempt from these feelings either.

Bear in mind that the PIC has enough on their plate without dealing with every tantrum, request for lollies or demand for attention. This is where you step in. Being Chief Child Wrangler is a key festive task. Note that it doesn't mean hyping the kids into a frenzy, then lying on the sofa while they wreak havoc. If you do a good job of keeping the children under control and out of the way of the PIC, you may escape other tasks (see step 3). Also, the kids will love you. This is quite a nice feeling at Christmas, especially if you don't have to see them until next year.

Step 5: Be in it for the long haul

Christmas Day is probably the apex of Big Food Occasions at this time of year, but it's by no means the only one. If you're serious about stepping up to be useful, then you can't sit back on Boxing Day and be all, 'nah, I peeled the spuds yesterday, now I'm just going to watch the cricket'. It's a marathon, not a sprint. Pick up that tea towel and get to it. Unload the dishwasher, sort the recycling, listen to grandma, fix the broken toys. Proactively buy more bread or milk, or whatever the household is about to run out of. Show your gratitude to the PIC in whatever way seems appropriate. It may make for a more tiring day than you're used to, but it will stand you in good stead for many Christmases to come. And if you do a really good job, you might even get to be in charge next year.

* Lucy Corry is a Wellington journalist and recipe writer