Opinion - When a man is tired of London he is tired of life, Samuel Johnson famously held, but in 2019 the aphorism of choice might have been less about Brits who aren't excited about their capital than those who are feeling a bit over New Zealand.

Not only are fewer people in the United Kingdom upping sticks and heading our way, more and more of those who already have are reportedly having second thoughts about remaining on in the Antipodean sun.

Call it a case of out with the new and in with the old.

British annual departures from New Zealand currently constitute the third largest by nationality, according to the latest figures. And the 8929 British arrivals over the year to this past June was nearly a quarter down on the previous 12-month period.

The turnaround appears especially newsworthy when seen in the light of the UK's imminent divorce from the European Union.

Three years ago, in the aftermath of the dramatic Brexit vote, Immigration NZ received more than 10,600 registrations of British interest, more than double the figure for the same period a year earlier. A year on, net migration to New Zealand surged to an all-time high of 72,000, with Britons accounting for nearly one in 10 of the new arrivals and only China and India contributing more.

Anecdotal accounts gathered from social media variously blame the change of heart on costly rentals and heavy Auckland traffic (have any of the complainants tried driving along the M5 recently?), not to mention New Zealand's dubious reputation as one of the developed world's only nations where the major commercial city lacks so much as a light rail connection from the airport to the CBD.

Also cited has been a perceived cliquishness in the local culture.

In recent years, too, presumably, the ubiquity of social media and the global news cycle has also put paid to this country's erstwhile reputation as an idyllic retreat from the world's strife.

For every travel feature showing canoodling couples frolicking on hazy beaches beneath a romantic Polynesian moon there have also been high-profile stories of violence - including sometimes deadly violence against British visitors - and other unsavoury domestic problems. 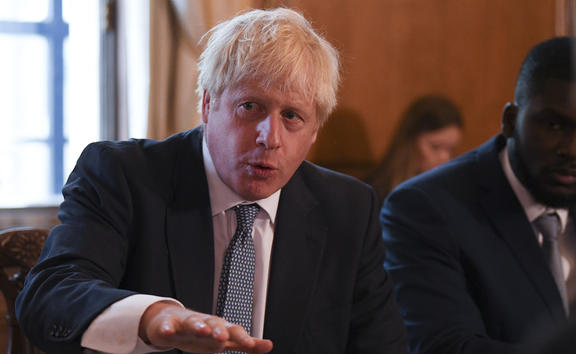 But what about 31 October 2019, the date Prime Minister Boris Johnson has vowed he will lead Britain out of the EU, "no ifs, no buts"?

Ever since the original referendum, news outlets have palpitated over Brexit's final act, especially were it to happen without an economic cushion in place along the 499km Irish border.

Some of the warnings have been decidedly apocalyptic. Recent days have seen bleak media predictions of "catastrophic" disruptions to the country's role as a $350bn global data hub along with ongoing attention to a leaked report warning of potential public disorder and community tensions, shortages of fresh food, medicine and fuel.

Mr Johnson, a onetime editor of the Spectator magazine, probably should be taken at his word.

The media establishment he once worked in perhaps less so. Why else would the British news industry's increasingly feverish warnings not be reflected in the migration data?

One possible answer - offered by this writer after three visits in the past 18 months to Britain, including recent time spent on both sides of the Irish border - has to do with an unexpected turn in cultural attention.

Whether Britons joyously support the new order or else believe its political instigators deserve to be hung, drawn and quartered, the reality has certainly focused much renewed attention on the perfectly good question of what it means to be British - or what makes Britain "great", so to speak.

Many of the answers have obviously been appealing enough to assuage any other short-term fears.

Or at least sufficiently so to stop numbers of citizens hightailing it for the South Seas.

But local Anglophiles need not be too anxious. The combined number of long-term residents in New Zealand who were born in one or other of the countries of the United Kingdom accounts for nearly 60 percent of all foreign-born people living here overall, according Statistics NZ. That's nearly 250,000 of us who still respectfully disagree with Samuel - if not Boris - Johnson.

* David Cohen is a Wellington journalist.