Opinion - We seem to have several repeating elements in our modern political scandals - a national party leader, a recording device, a moment of truth and more than once, only smoke where there was supposed to be a gun. 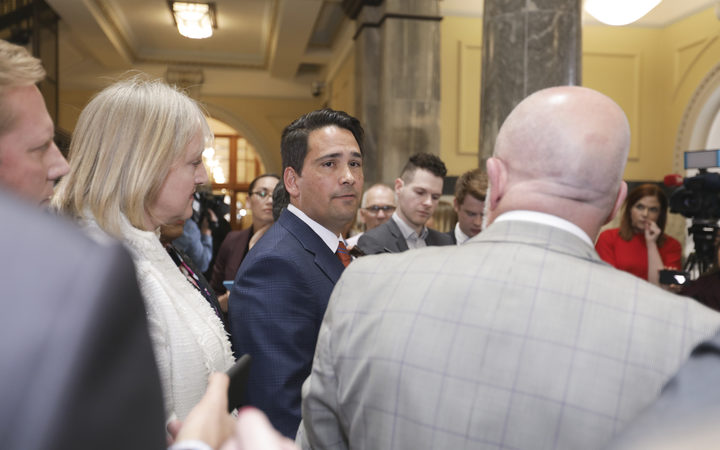 What a shame no one makes donations the old fashioned way any more. You know the sort. An enormous cardboard cheque with a lot of noughts on it, signed with a great big flourish of a signature by a generous man (it's always a man) of means.

The generous benefactor and grateful recipient will be facing the camera with gormless grins, shaking hands, and there's no mystery what each is getting out of the the deal.

If only political donations were the same, and not - as Jami Lee Ross drove through the night to recount it - by way of the party leader telling you to pick up a $100,000 donation from a wealthy businessman and to make sure it gets split into smaller amounts so that none exceeds the $15,000 threshold that requires a name on it.

Mr Ross spent an hour with reporters lamenting that the National Party leader for whom he had loyally carried bags was in fact "a flawed individual without a moral compass."

He declared, as jaws hung open, that he would be resigning from Parliament and laying a police complaint against Mr Bridges for transgressions of electoral law.

The National Party leader begged to differ, as you might expect.

He said the allegations were baseless and entirely false and he invited Jami-Lee Ross to take them to the police to be investigated fully and promptly because they had zero chance of success. As you might expect.

At any stage did Zhang Yikun offer him or National a $100,000 donation? Mr Bridges demurred, as you might not have expected.

If only there were a photo of Mr Bridges and a wealthy Chinese businessman shaking hands and gurning for the camera in front of a giant cheque.

Now we wait to learn for certain just who said what, and when, and with how much, if any, degree of unlawfulness.

For this we may be greatly assisted by a recording Mr Ross claims to have made.

The moment of truth, if you will. We seem to have several repeating elements in our modern political scandals, a national party leader, a recording device, a moment of truth and more than once, only smoke where there was supposed to be a gun. For now, we wait.

A rogue MP is not a new phenomenon, and neither is vaulting ambition and self regard.

But the sheer volume of this MP's Twitter eruption feels novel and maybe this is deleterious to democracy but perhaps you might just see it as a gift social media is making to our world by exposing and exploding rogue elements more swiftly.

Maybe it has simply helped bring into sharper focus the character of a man who by his own admission was willing to conceal unpalatable truths until it served his interests better to disclose them.

And you might ask: this man was trusted and promoted by the leader of the opposition. What does this say about him?