Review - The introduction of a new Doctor is always a big deal. Outfits are unveiled, companions revealed, Tardis makeovers hinted at. But when it's the first time a woman has taken the helm of an almost 55-year-old show, that's an even bigger deal.

So how was it? And as some sections of the internet had predicted - did the world end?

The Woman Who Fell to Earth opens with a description: "smart, funny, caring. Proper special". It's a more gentle introduction than most, with none of the frenzy of Peter Capaldi's introduction to the series. No dinosaurs vomiting up a Tardis here.

As well as proper special, it's also proper scary, as unsuspecting soon-to-be supporting characters wander around in the dark, chased by something unseen, all flickering lights and flowing alien tentacles. A properly grotesque alien monster appears in the second act too. It's sometimes hard to believe Doctor Who started as something the kids could watch. That said, it feels a bit like we've gone back in time - as far at least as pre-Stephen Moffat.

The score amps up the menace, even as Jodie Whittaker's Doctor - who you get the sense is definitely going to be wearing sensible shoes, just as soon as she finds her Tardis - takes a 'just the facts ma'am' approach.

"Right then, troops. No, not troops, team," the Doctor says, possibly giving a hint as to how much those characters Ryan Sinclair (Tosin Cole), Yasmin Khan (Mandip Gill) and Graham O'Brien (Bradley Walsh) may be given to do in this series, but also to the inclusivity of this new incarnation.

We're very clearly in 2018 - Ryan is a YouTuber, there's a GoPro as part of the action, even WhatsApp gets a mention. But, the thing that most heralds it as something that's been made this century is the diversity - of gender, of ethnicity, of ability. 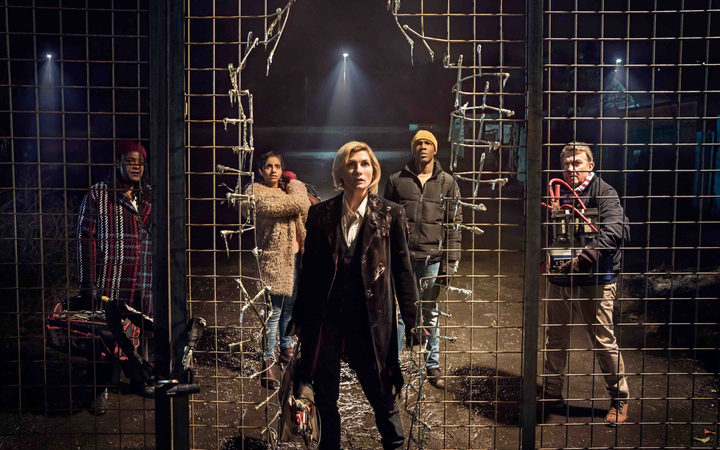 The new season of 'Doctor Who'. Photo: AFP / Notimex

Whittaker is great, and the performers around her each get their moment to shine. Under showrunner Chris Chibnall, it all feels less convoluted and more... human than Moffat's latter series.

Whittaker's Doctor is questioning - "what kind of creature would do this; why here, why now" - and apologetic - "I'm sorry you had to see this; I'm sorry I haven't figured out what's going on yet." She's reassuring, but she's also trying to figure out who she is - learning to trust new instincts and impulses. It's hard not to feel like that's a parable for women in 2018. As much as Whittaker has been at pains to say she's a Doctor for all people, the show is aware of the moment it is ushering in.

"If you want something doing," she says. "Ask a woman" is implied, but it's there, and it's one moment among many of women being capable in a myriad of ways.

There's another moment, which I don't want to spoil, but if like me, women finding their strength and power makes you a bit teary - I'd suggest having some tissues on hand.

It's impossible to tell who the Doctor is going to be from the first episode - that's part of the conceit. Even throughout the hour-long episode, Whittaker becomes more and more her Doctor - moving away from where Capaldi left off. And she does it with heart, with empathy, but also with wit. This, I think, is going to be fun.

And no. As anyone who has watched Doctor Who before will already have known - the world didn't end.