Analysis - It turns out you can't judge a book by its colour either. Labour's first Budget in nearly a decade came with a bold red trim, rather than the royal blue Treasury uses to present the documents when National is in power. 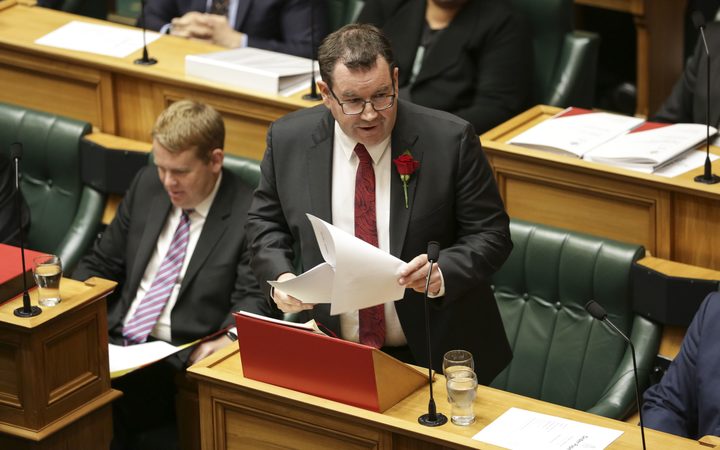 But inside this was a blue budget not a red one. It's a description neither Labour nor National would like bestowed on Budget 2018 but this was a triumph of neoliberalism or at least a continuation of it.

Not only has Finance Minister Grant Robertson delivered a surplus of more than $3 billion, rising to more than $7 billion by 2021, he is actually going to spend less than National has been spending as a percentage of GDP.

Government spending - or core crown expenses in the jargon - will be 28 percent of GDP. That is lower than the figure for almost all of National's three terms in office.

It's lower too than that prescribed by the already heroic Budget Responsibility Rules, a self-imposed straight-jacket that saw Labour commit to spending no more than 30 percent of GDP.

The debt targets, very strict by international standards, are also being met with net core crown debt for 2018 forecast at 20.8 percent of GDP.

Now this might all look like fiscal trainspotting. Who cares? Well, you can only hit these targets by closing your wallet and your ears to areas that are crying out for funding.

It also requires us to accept a narrative where two stories collide. If there have been nine years of neglect and there are alarm bells ringing in health and housing how does that square with tight fiscal discipline and hefty surpluses?

Labour has spent much of the last decade talking about an under-nourished health system. This Budget does pump $750 million in capital spending into health - money to tackle urgent building problems. But the operational cash injection is little more than life support.

The Council of Trade Unions estimated that operational spending would need to increase by $805 million this year just to meet cost and population increases. In other words that's the money needed just to stand still. Labour is putting in $3.2 billion over four years. It sounds a big number but break it down annually and you're pretty much at the stand still level.

The glaring omission in this Budget was spending for Māori Development. I've written in this column before that the government strategy seems to be mainstreaming rather than targeted assistance for Māori. But even given that strategy the allocations are breathtakingly small.

Buried at the back of the Budget press pack is a release outlining just $37 million for Māori Development over four years, initiatives for housing, land development and youth not in work or education.

When you consider the Crown spends nearly $90 billion, it's striking that the might of the Labour Māori caucus - there are five ministers' names on that press statement - can only deliver $9 million a year.

Labour's relationship with Māori voters risks being strained if this continues.

Much more largesse has been lavished on the New Zealand First relationship with $1 billion for foreign aid and diplomats and another $1 billion for the Shane Jones provincial growth fund.

Even Winston Peters' racing portfolio gets a giddy up. The government will spend nearly $5 million on tax deductions "for the costs of high quality horses acquired with the intention to breed".

It has to be a handsome horse though. The rules say it will be tax deductible if it is a standout yearling "that commands attention by virtue of its bloodlines, looks and racing potential".

Politically though Labour has probably backed a winner with Budget 2018. Labour is always more vulnerable to claims it has spent too much money rather than too little.

Robertson was eager to burnish his fiscal responsibility credentials on his first outing. He has done that.

And of course he's got two more Budgets before he fights for the Treasury benches again. No doubt the election year Budget will be red on the inside and not just on the cover.

This looked like National's tenth Budget rather than Labour's first.