Something happened at Eden Park last night that hasn't been seen for a long time. 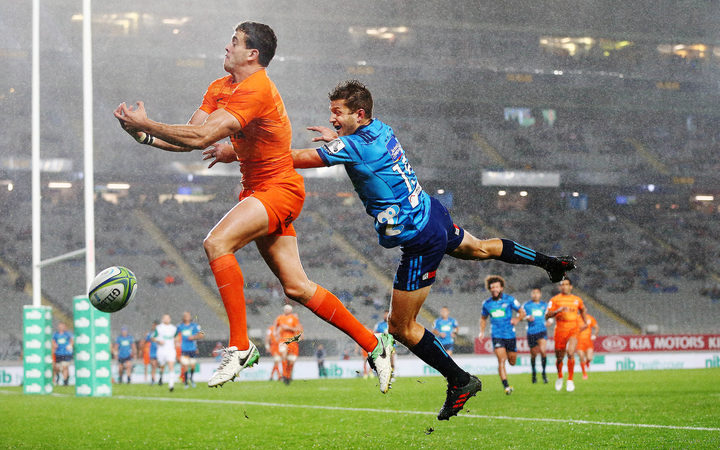 Emiliano Boffelli of the Jaguares competes for a high ball against Matt Duffie of the Blues. Photo: Photosport Ltd 2018

People rushing forward to congregate as close to the field as possible. Passionately bursting into song, knowing they were about to see their team break a historic drought. Deliriously cheering, dancing and celebrating as the full time whistle sounded.

Unfortunately for the Blues, that came courtesy of a couple of hundred Argentinian students who had assembled together in the South Stand, and they were supporting the Jaguares.

Ten minutes, some staunch defence, and a few mistakes later by the Blues, and their team won. There was no grandstand finish, no feeling that the home side was going to pull something out of the fire. The Blues limply surrendered with yet another knock on, sparking the celebrations among the Argentinian players and fans alike.

The result means the Blues now have the unwanted tag of being the first New Zealand team to lose to both the Super Rugby expansion teams, as well as drop a home game to one of them. None of the other four have lost to either of the Sunwolves or Jaguares.

It was hard to know what last night's 20-13 result said more about: the brave Jaguares, who read the horrible, rainy conditions perfectly and ground out the win by backing their scrum and lineout, or their opponents. It wasn't pretty, for the most part, but the Jaguares showed that playing simple rugby can still win games when you're playing a team that looks like they've just met each other five minutes before kickoff.

The win, alongside the two they've picked up on the way here against the Rebels and Brumbies, also eases a lot of pressure of the Jaguares. For the last three seasons they've underperformed quite noticeably, a far cry from the predictions that the Pumas-stacked squad would be a permanent resident in the competition playoffs.

The talk this week should be about the Argentinians too, for no other reason than there's really not much left to say about their opponents.

It was another listless, confusing performance by the Blues. Their 2018 season is now well and truly cooked, at just over the halfway mark. They have suffered a massive amount of injuries, but that really isn't much of an excuse when you take into account that basically every other NZ team has as well.

Watching their warm ups over the past few home games has been telling, as they run the same basic drills a club side would to build up the intensity to kickoff. Their opponents, meanwhile, take the time to run through a few complicated backline moves but generally stay relaxed and low key.

The difference is that the Blues look like they're starting again every game, instead of following a coherent gameplan suited to the talents of their squad. They button off in key moments - whether it was the first few minutes of last weekend's loss to the Highlanders, or the 50-60 minute period last night. Both of those conceded two crucial tries each, and that's ultimately been the difference in the games.

The whole franchise right now was accurately summed up by the halftime show at Eden Park. In the pouring rain, two guys attached to horizontal bungee cords raced from one tryline in a race to touch a giant bucket of sponsor's product. The problem was the cords were far too long and didn't provide any resistance, meaning the the whole thing was over in a matter of seconds.

The ground level announcer simply told the bemused crowd: 'that's it', and left the field.

But it's alright Auckland, because at least the Warriors are good now...oh wait.