Analysis: For years, he has been regarded by South Koreans as a ruthless bully, the face of a hostile neighbor intent on developing weapons of mass destruction whose subjects heeded his every whim. 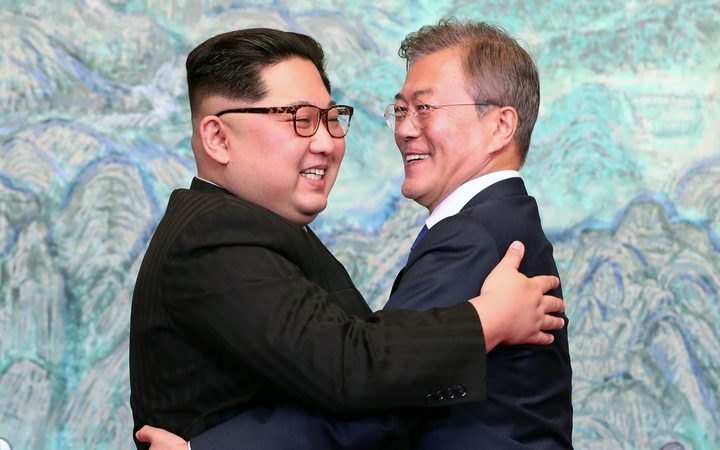 But during a 12-hour visit across the border Friday, North Korean leader Kim Jong Un appeared to soften that image, at least somewhat, by presenting himself as a normal, even likeable fellow with a candid, humble side and a quick wit.

It was a rare glimpse into Kim, who has rarely left his country and is normally depicted in the hero-worship language of the North Korean propaganda machine.

But on live TV watched by millions of South Koreans, he smiled warmly, talked, joked and even embraced South Korean President Moon Jae-in during the first inter-Korean summit since 2007.

"I've only seen him in media, standing stone-faced in a nuclear site or political event, but actually he seemed quite friendly and respectful when he greeted Moon," said Lee Soo-kyung, a 34-year-old teacher in Seoul.

Some US officials and experts doubt Kim's sincerity, and see a recent flurry of North Korean diplomacy as a ploy to win relief from economic sanctions against Pyongyang.

Kim has often shown a ruthless side. He has been accused of having his half-brother and uncle killed to consolidate his hold on power. Under the grip of Kim's one-man rule, the country has many dissidents and political opponents in prison camps, according to defectors and civic groups.

US intelligence experts are trying to build a profile of Kim for President Donald Trump ahead of a planned summit between the pair, but direct knowledge of Kim remains limited and is like a "black box," according to one U.S. official familiar with the profiling efforts.

Kim and Moon pledged at their summit on Friday to work for the "complete denuclearization of the Korean peninsula" and announced they would work with the United States and China this year to declare an official end to the 1950s Korean War.

Kim seemed happy to meet Moon, at times laughing with him and at others listening intently. At one point, Kim joked that North Korea's early morning missile launches had likely awakened Moon numerous times, and promised not to do that any more, officials said.

"If you visit, having lived in such an environment, it would be embarrassing for us," Kim said, according to officials. "We will prepare ourselves to better accommodate you when you come."

He referred to North Korean defectors and residents of Yeonpyeong Island, a South Korean island the North fired at in 2010, killing two soldiers.

"I know they have been worried that the North Korean military could fire shells at them at any time, and now they have high hopes for our meeting today," Kim told Moon.

Kim's softer tone was a far cry from the kind of fiery rhetoric he exchanged with Trump last year when the US president called Kim "Little Rocket Man" and the North Korean leader described Trump as a "dotard," or senile old man. 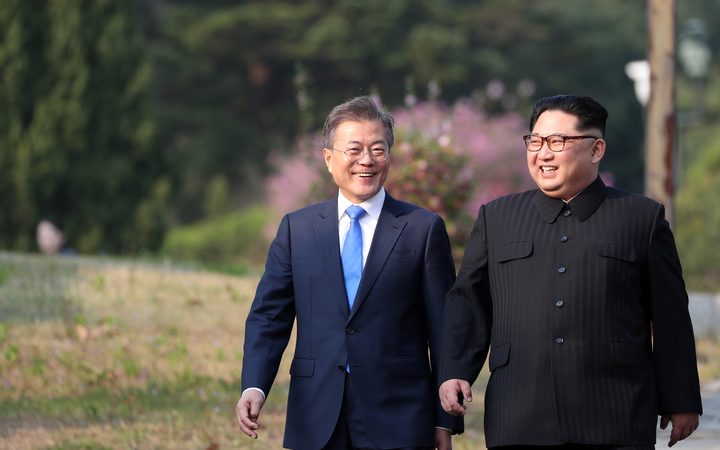 Kim looked comfortable at the summit.

"It was his de facto debut on the world stage, and he now wants to work with the international community and rebuild the economy, for which he needs an image as a soft, decent leader."

Earlier this year, Kim launched a diplomatic offensive, proposing summits with Moon and Trump and making a surprise trip to Beijing for a meeting with Chinese President Xi Jinping.

Later on Friday, Kim stood side by side with Moon for his first-ever news conference, vowing efforts for peace and thanking not only ordinary Koreans but also journalists from around the world for their interests in the summit.

Kim also was spotted dozing off during a farewell music performance after dinner, capping the historic day.

"Because of the North Korean state media's portrayal of Kim often as an enigmatic creature, we are so used to seeing images of Kim being so serious and humorless," said Lim Jae-cheon, a professor of North Korean studies at Korea University in Seoul.

"But what we saw today was totally different. Kim proved today that he is just an ordinary man, not a perfect human being."

The UN's North Korea human rights expert said this week that Trump and other leaders who meet Kim must not neglect human rights.

In 2014, a report by a UN commission of inquiry cataloged massive human rights violations including large prison camps, starvation and executions.

It said these should be brought to the International Criminal Court and that Kim himself might be personally responsible for crimes against humanity.