RNZ reporter Katie Scotcher thought she'd hit the jackpot when asked to interview childhood icons Bert, Ernie and Kermit ahead of the Jim Henson live concert in Wellington, but she quickly found out childhood dreams are a fragile thing ... 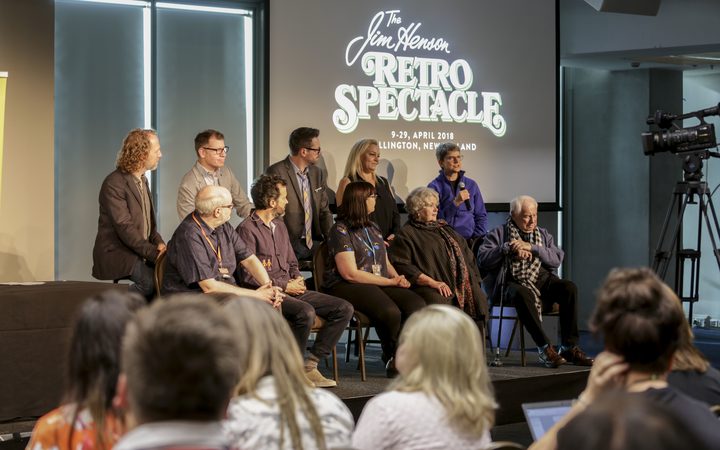 First Person - I couldn't believe my luck when I was told I'd be meeting the icons who have dominated the children's television scene for decades.

As a 90s kid, I missed out on Sesame Street and The Muppets' peak - but I have fond memories of driving my parents mad on family holidays by singing 'manamana' for hours on end, and proudly wearing Elmo and Cookie Monster T-shirts to school religiously.

I was a bundle of nerves but excited at the thought of seeing the world's most famous frog, Kermit and Ernie - who I'll note, was without his iconic rubber ducky.

The puppeteers who have brought characters like Miss Piggy, Animal, Rosita and Red Fraggle to life were also set to be in attendance, without their furry/felt friends, to answer questions from media.

When we arrived, I was directed to set up my audio recorder on the table where Kermit, Ernie and Bret McKenzie would be answering questions.

I walked up to the table as instructed, and to my horror Ernie and Kermit were there - under the table, laying face down.

I've always known they were puppets, but seeing them under a table made me feel as if I'd stumbled upon a crime scene.

I was shaken and awkwardly walked away without taping my recorder to the table. I took my seat among other media. Did they know Kermit and Ernie were lying, limp, under the fold-up table in front of them?

Then, on walked McKenzie, who has worked with the Muppets since 2010. He sat at the table, as Ernie and Kermit's puppeteers sat beneath it.

When the infamous Kermit and Ernie appeared from behind the banners, so did every smartphone in the room. 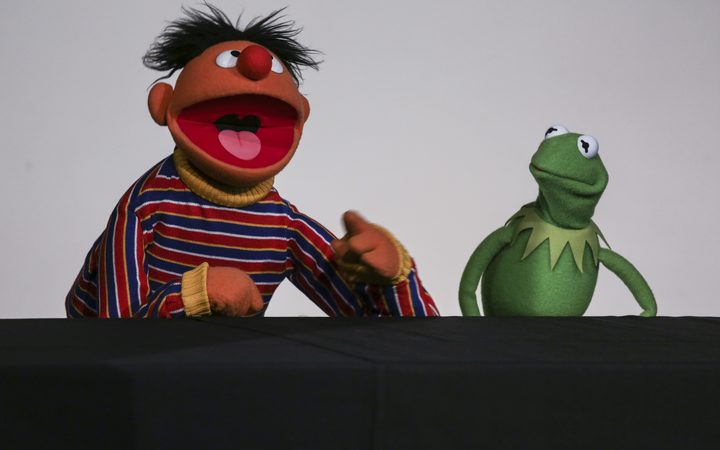 McKenzie began by asking how the characters were, and both said they had got over their jetlag. The fact they were conked out underneath the table moments before proves otherwise.

He then asked for their thoughts on their creator, Jim Henson.

"I have no idea exactly what he did, but Jim [Henson] was always there to lend a hand and give us a lift," Kermit said.

"I liked that he signed our cheques," Ernie added.

Their first few days had been spent on the famous 'Bret McKenzie walking tour' - all of the places Bret McKenzie has lived in Wellington.

Bert and Ernie are also planning on visiting the Zealandia bird sanctuary to try to find the relatives of their Sesame Street pal, Big Bird.

Next, the 'Jim Henson Legacy guests' walked on ... it was lovely, but also a bit bizarre, seeing these people in the flesh - I can say for certain, they look a lot different to the characters they play.

I had organised a one-on-one interview with Bert and Ernie last week.

The interview set up was odd - three puppeteers sat on wheelie boards near my feet, while I stood and spoke to the puppets.

And it was obviously tiring work, all three puppeteers were manouvering the infamous duo with their arms raised above their heads. At the end of the interview - they were left with beads of sweat on their forehead.

I was allocated 10 minutes to ask questions:

Your performance this weekend is set to be pretty big, how do you prepare?

Ernie: "I particularly like to warm-up while Bert's reading his book."

You two have been friends for a long time, is this the furthest you've travelled together?

Bert: "I'll have to check my log book on that."

Bert: "Yeah, everywhere we travel, absolutely, all the miles - they rack up."

Four minutes later, I was informed I would be allowed one more question - and that was that.

I never got to ask Ernie if his mum still knitted his sweaters and if he and Bert had big plans for their 50th friendship anniversary next year.

I felt like the Swedish Chef during his catering disaster at Kermit's birthday party, or like I'd been karate chopped in the face by Miss Piggy.

It was inevitable, as soon as I stumbled across Kermit and Ernie hidden underneath a fold-up table, my childhood was ruined.