Opinion: While Wallabies player Israel Folau has been widely condemned for his comments about homosexual behaviour, they have raised issues that are bigger than any one player, writes David Cohen. 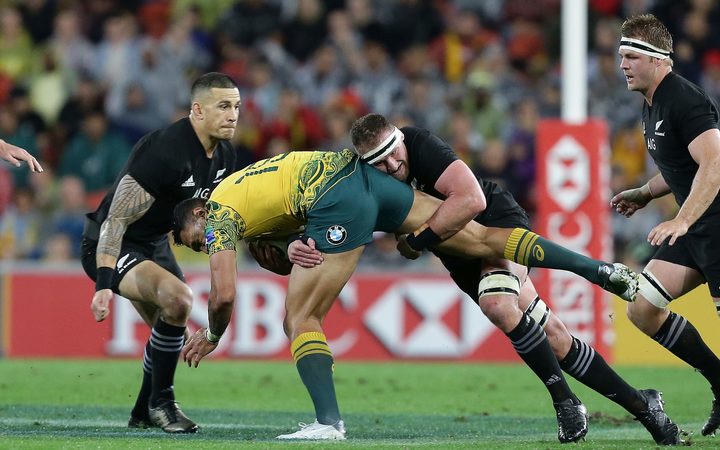 It is easy enough to say Israel Folau was wrong to get all religiously high and mighty on social media about homosexual behaviour.

The question also naturally arises of how the mainstream media ought to be dealing with fundamentalist beliefs of any stripe in the first place - not to mention the perils of holding up people who happen to be good at kicking a ball, as also being liberal champions.

It has been said before - by this writer, in fact - that not only sports stars but poets, critics, movie-makers, playwrights and rock performers tend to make for notably unreliable authorities on pretty much all matters outside of their chosen field (if on that).

With only a few notable exceptions, they offer bad ideas on social policy, banal observations about economics and, yes, whoppingly ill-considered religious views, too.

In the latest case, Folau hastened his own Judgement Day in the wake of a post he made on Instagram about gay people courting hellfire if they did not repent of their "sins".

Social media has been full of virtuous banter ever since, variously calling for him to receive the professional boot, tactfully disappear from human ken or else, take a deep dive into the boiling lake of sulphur and ash.

In a subsequent website column, the 29-year-old sports star - and husband of Silver Ferns star Maria Folau - has now clarified his original remarks. A touch unconvincingly, perhaps, he has insisted he meant no harm.

The recent gesture appears to have pacified a jittery Rugby Australia, and probably its sponsors - if not everyone else.

Some mainstream commentators have used the controversy to anguish over the limits of free speech. In the news business, these are sometimes known as whyohwhyofwhyohwhy pieces - commentaries that rather skirt a fundamental issue, in this instance the question of fundamentalism itself.

Folau was, after all, simply giving his own, particularly rigid, Christian stance on homosexual behaviour. He also was expressing a view shared by many who take a severe interpretation of any of the three great monotheistic religions.

Christianity's record in this regard is well known, notwithstanding the fact that plenty of thoughtful, devout believers, would argue the toss, or at any rate, question the focus on what consenting adults choose to do among themselves.

But the ultra-Orthodox stream of Judaism isn't exactly known for sanctioning homosexuality (although Israel - the country, not the player - generally takes justifiable pride in being the most LGBTQ-friendly country in the Middle East).

And the ferociously anti-gay record in parts of the Muslim world, where homosexual acts are sometimes punishable by death, ought to make a western liberal blanch.

Here again, of course, a similar caveat ought to be underscored: reporting from the world's most-populous Muslim nation, Indonesia, in the late 1990s and early 2000s, I remember a prominent parliamentarian who was known to dress in women's clothing out of hours. In the Sufi-influenced country, this aroused little comment.

As the British diver Tom Daley recently pointed out after winning the synchronised 10m Platform competition at the Gold Coast tournament, no fewer than 37 Commonwealth nations currently have anti-LGBTQ statutes: a rainbow mosaic of bigotry.

Even where no such statutes exist - as in the case of New Zealand - old attitudes still exist. It could be argued that Israel's notably bad case of the sexual vapours probably wasn't so out of place in the local rugby world in which few players have ever come out as gay.

If holding such liberally objectionable views is tantamount to expressing them - and the line between the two surely gets pretty thin on occasion - then much good work is still required.

The media can even lead the way. A more constructive approach (other than sporting associations to insist their stars learn a few social manners) might be to pause a while longer before dining out on any such comments made by celebrities in the first place, and try to keep an eye on the wider picture.

Sometimes fixating on just the one chance Instagram comment isn't just unhelpful. It can even be a bit (sorry) sinful.

* David Cohen is a Wellington writer and journalist.