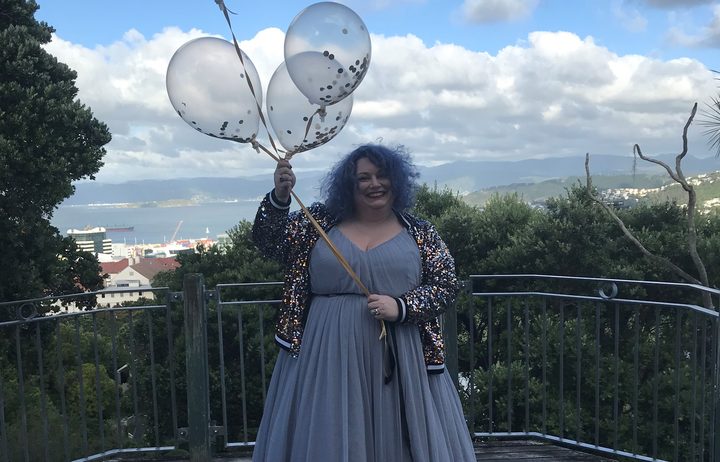 It might have been at 13, when someone left a pamphlet for a weightloss programme in my mailbox at boarding school. I can remember picking it up, excited that it might be a letter from my parents, only to feel hot shame, tears threatening to overflow, as I tried to hide the humiliating glossy pages from the girls around me.

It could have been at 20, when an indoor netball opponent expressed surprise at my skill - because fat people can't be athletic - and then anger when he realised I was running literal rings around him.

It could have been any number of small, slight, humiliations. The first time I realised that nothing in a clothes store would fit me, even with all the uncomfortable shapewear in the world. The first time someone yelled abuse from a car, calling me a fat bitch. The first time I ordered a salad, because I was too embarrassed to eat a burger in public.

I didn't know how to be fat in the world, because even though I saw people who looked like me all the time, there was no instruction manual on how to look like me and be happy. All the women I looked up to - whether popular or powerful - were smaller than me. And even then, the ones who were bigger than a size 12 were the object of ridicule. I learned that if I did something wrong, the first thing people would comment on was my weight.

So I learned to hide. I retired into a corner, only coming out in places of safety, with my family, or close friends. I wore clothes that fitted, never mind if I liked them or felt good in them, and the baggier the better, as though shrouding myself in fabric meant that people would never see the obvious.

I might have realised I was fat at 25, when the man I was seeing told me he liked me, but he didn't want to be seen in public with me, because he didn't want his friends to know he liked a fat chick.

I learned that I didn't deserve love. That only thin women deserve love, and then only if they can be a trophy. The movies and TV I loved reinforced this: fat Monica was funny, but thin Monica got to fall in love with her best friend.

And so I learned how to be funny, self-deprecating, the sidekick in my own life. I would make the joke about myself before anyone else could, because people laughing with me hurt less than people laughing at me. If I couldn't hide my fat ass, I could at least avoid being the butt of the joke.

I might have realised when I saw pictures of bodies like mine illustrating stories about obesity. Headless, out of focus, bellies overflowing belts, and not a thigh gap in sight. Headlines about muffin tops and bingo wings and cottage cheese thighs. Fat bodies don't deserve humanity, I learned.

And so I pretended not to be fat, and learned to listen to how people described me. Curvy was OK, Rubenesque inaccurate. I lived in fear of dying, and having someone describe me as larger than life. I wore my hair straight and brown, because my naturally curly hair made me stand out too much - made me seem even larger somehow. I hid behind the curtain of my hair.

It might have been when I was 35, and the doctor filling in for my GP told me that my depression was probably due to my size, and insisted on sending me for a battery of blood tests. If she'd read my file she'd have seen I'd had those tests months before, and if she'd listened to me, she might have understood my depression had little to do with my body.

And so I learned that my health isn't my business, but the public interest. But then, that was a lesson I'd already learned, aged 11, when a woman asked me, on a 30 degree day at the beach if I "really needed" that ice cream, rather than giving it to my somewhat more svelte cousin.

I wish 11-year-old me had had the tools to tell that lady what I'd told the doctor - wisdom I'd learned in the ensuing 20 years - that shaming my body wasn't about my health, because people won't look after something they hate.

Because by the time I saw that doctor, the internet had arrived, and my life had changed. I found stores that sold clothes for my size, and my body shape. Clothes that had waists and pockets and colours, and no more extraneous tulle and zips than I was willing to wear on a given day. Clothes that made me feel like me - like I'd always felt on the inside, but could never get my outsides to match.

I cut my hair, and stopped scraping back my curls. The colour went from brown with a few blonde streaks (so edgy!) to red, to blonde, to pink and blue, and every hue between. I got tattoos, and learned what it feels like - for the first time - to look at a part of my body with love.

I started to read the work of women like Lindy West and Michelle Allison. I sobbed in the bath when I read Lindy's book Shrill, and she talked about wanting to be picked first, just once. I devoured the work of Roxane Gay, and when I got the incredible chance to interview her, all I wanted to do was thank her for being brave, for standing up and speaking out in ways I had never been able to.

I stopped reading beauty magazines, where people like me were only ever the before photo, and started reading blogs, and following instagrammers, and bit by bit, I learned to unpack every comment, every insult, every well-meaning but hurtful query.

I learned how to respond when people told me I was "brave" for wearing sequins, that they could never wear what I wear, and that "you don't mind standing out, do you".

And I realised how important it was that other people see me, in the way I was seeing other women. How, as a white, straight, cisgender woman, there were depictions of me everywhere, except for in this one thing.

I lamented my twenties, when I learned how to hide, felt like I had to hide, could never stand up or out. I wondered who I might have been if so much of my personality hadn't been developed alongside - and in defence of - my body.

I stand up to the bullies who think my body - or anyone's - is worthy of ridicule. To anyone who thinks I should hide, should cover my upper arms, should feel anything other than kindness towards my body.

And I try, as much as I can, to make sure other people get a chance to see themselves with kindness too. Because we can all use a little of that.

* RNZ Social Media Editor Megan Whelan was commissioned to write this piece by Kate Sheppard Place Women (www.kspw.nz) and it is reproduced here with permission.