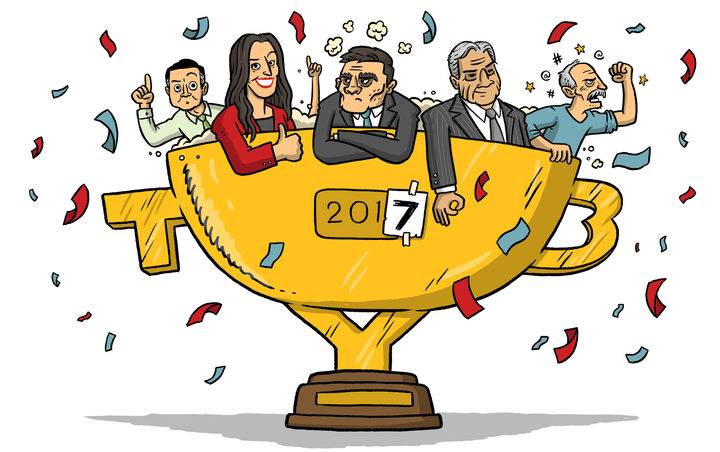 Steeped in history, the Toby & Toby Awards have been handed out every year since 2015, apart from 2016, when they weren't handed out. The awards recognise the outstanding achievements in New Zealand this year. They are facts, and as Aristotle famously tweeted, you can't have an opinion about a fact.

Big win here for Jacinda Ardern. In the space of just a few days after encountering the American president in Asia, the prime minister of New Zealand issued a hat-trick of breezy zingers. She responded to his suggestion that her win had been controversial by noting that no one marched when she took office. She cruelly observed that he is the same in private as he is in public. And she accidentally revealed that he may have mistaken her for the Canadian PM's wife.

Also in 2017, Ardern became prime minister which was quite impressive.

Political discourse spanned a range of subjects in 2017, including abuse in state care, paid parental leave and Pike River, but nothing came close to matching the debate over the acceptability of tinned spaghetti on pizza. Early adopting thinkfluencer Bill English launched the discussion by using the internet. Other relatable content included the Walk Run, which is destined to become a Commonwealth Games sport any minute. Also he led a largely impressive election campaign, emphasising his achievements in getting through economic upheavals and teenage acne.

A win in this category in 2017 for Metiria Turei.

An easy choice for the academy, this. Gareth Morgan, the motorcycle diarist of late capitalism, preached the gospel of evidence based policy. His evidence, evidently, revealed that people respond well to being called idiots. Morgan's Opportunities Party, which provided opportunities for all New Zealanders including washed up radio hosts, failed to make the 5 percent threshold owing to the moronic uselessness of the New Zealand media and imbecile New Zealanders generally.

The spade-a-spade award for hole digging

Steven Joyce for his exceptional gardening. Laid out like a spreadsheet.

The haystack award for creative use of cartography in an argument

The NZ Defence Force. A misplaced dot in a map in the Hager-Stephenson book Hit and Run did little to change the important claims made, but the NZDF bosses largely succeeded in making it appear so.

Winston Peters. There were many entertaining moments in the election of 2017 but for sheer pulsating drama, nothing could match the time that Winston Peters sent a minion down to his car in the middle of an interview with RNZ to fetch a letter from Helen Clark proving he wasn't sacked a decade earlier. Peters was as mercurial as ever this year, oscillating between exquisite diplomacy and wit to wild anti-media diatribe. Apart from all that, the Rt Hon WP conducted an efficient negotiation process so disciplined and discreet that gallery journalists had almost nothing to talk about except biscuits.

Justice Cull (aka Just Ice Cull) delivered a "sick" and "fly" and "very good" ruling in the case of Eminem's publishers against the NZ National Party. Ice Cull found against Pretty Legal Steve and his team, concluding her judgment like this: "And prophetically so rapped Eminem: 'You better lose yourself in the music, the moment / You own it, you better never let it go ...'"

Johnsonville Mall special prize for a departing party leader who has a gif we're keen to wheel out one last time.

The Bucket Fountain New Zealander of the Year

Classic Kiwi battlers, both. We love a bit of a piss-take, and Thiel, the ultra-libertarian, Trump booster and bankroller of the Hulk Hogan lawsuit that destroyed the website Gawker, took the piss by gaining citizenship after having spent 12 days in NZ over five years, a mere 1338 days short of the mandatory stay for mere mortals.

Joyce, meanwhile, was the most celebrated of a range of Australians who were forced to resign their parliamentary seats thanks to an arcane constitutional requirement that dual citizens are ineligible to stand for election. For Joyce, who was discovered to be a NZer owing to his parents being born in Dunedin at a time when New Zealand was bestowing citizenships willy-nilly, as well as for others affected, it was agonising. Politically, its importance was indubitable. But mostly it was very funny.

Who wins? Thiel, because it turns out he's a keen patron of New Zealand art. Kia ora, Pita: spend, spend, spend. Let's see the colour of your bitcoin.

* This column is part of an occasional series by graphic artist Toby Morris and journalist Toby Manhire.