Analysis - A police recruitment video has gone viral, with many praising it for its humour and diversity, but some who have had recent interactions with the police say there's been nothing funny about their experience. 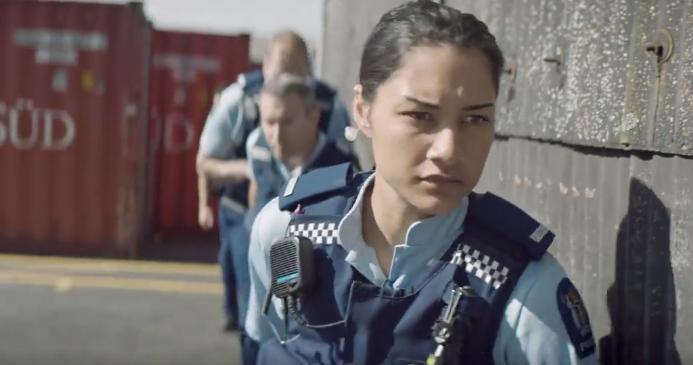 The recruitment video, declared 'NZ Police's most entertaining recruitment video, yet!', has had 5.2 million views on Facebook and has been shared more than 68,000 times, with comments coming in from people around the world claiming they want to move New Zealand to become a cop.

Some have hailed the video as an example of embracing diversity and commending the police force for having a sense of humour.

For others though, the video was jarring. It was shared the day after celebrations in Ōtāhuhu after Mate Ma'a Tonga played England in the Rugby League World Cup semi-final.

There, they witnessed police confiscating flagpoles from children. There, they were not feeling embraced by cops, but rather targeted.

"Their stance was they [were there] to protect the people, but it didn't really feel like that at all. It just felt like bullying to be honest," said Bryson Tautali-Naik who had joined in the revelry in Ōtāhuhu for the first time that night. It had been amazing for him to see everyone happy and proud of their community.

But he said he was disgusted at some of the treatment.

"It's hard not to see the irony, when there's such a huge gap in what they perceive themselves to be, and how they behave in reality," said Sina Brown-Davis, an Ōtāhuhu resident and mum.

"Because snapping a child's flagpole after a rugby league match is not a better work story."

Her 15-year-old daughter, who had recently connected with her Tongan heritage and family, was one of those who had a flagpole taken from her by police.

Her cousin's children, aged between seven to 14, had the same thing happen to them and ran back to their parents crying.

My 15 year old daughter just got her flagpole taken off her by the police because said it might be used as a weapon . I'm furious this racist heavy handed policing had killed off the community coming out to celebrate together #otahuhu #mmt pic.twitter.com/BPmyAmkYRl

"I've never seen children targeted by the police before, in such an open way. That's what was shocking to me," said Mr Tautali-Naik.

"The fact that they would walk up to little kids and rip the flag-poles out of their hands and confiscate them in front of everybody, with no shame. I can't imagine that ever happening after an All Blacks game in Mt Eden."

Mr Tautali-Naik said it was clear racial discrimination, and it hurt to see children experience that for the first time.

"That's the worst possible feeling. We try to say we're progressive and everything, but after moments like that it's like we're back at square one.

Inspector Wendy Spiller, Area Commander for Counties Manukau East, said police interacted positively with tens of thousands of Tongan supporters on the streets and were pleased with the behaviour of the vast majority of supporters. She said the safety of the community and those participating in celebrations were the number one priority for police.

Do we seriously need a behaviour report every time Tonga or a Pasifika country are represented in sport? This headline is the perfect example of racism by minimisation - how to turn an entire county of proud, loving passionate people into a child’s report card.

She said police confiscated a number of makeshift items used to make flagpoles which could have been used as potential weapons.

"This followed an incident several weeks ago where a police officer was left with facial injuries after they were hit across the face with a flagpole. A flagpole was also used to shatter the rear window of an occupied police vehicle in Penrose on Saturday night.

"We were proud of the actions of our staff on the night who acted with professionalism and empathy when dealing with tens of thousands of supporters out in public," said Inspector Wendy Spiller.

Bryson Tautali-Naik said he had seen the NZ Police recruitment video a couple of days after he had watched police confiscate flagpoles from children, and thought it was horrible timing.

"That's just a tokenistic gesture. There is no actual love behind that. I feel they're just using our faces and, where are the actions?"

The police say their current recruitment drive is looking to attract more women, more Māori, more Pacific Islanders, and more people from different ethnicities and backgrounds to better reflect the communities they serve.

By 2021 police have a target of having 50 percent female recruits and matching its recruitment levels to the population to reach 17 percent Maori, 9.3 percent Pacific Island and 14.8 percent Asian.

In 2015, one of the country's new Māori inspectors said police were serious about addressing the problem of tangata whenua and Pasifika people being over-represented in prosecution rate figures.

The following year, a report by the Independent Police Conduct Authority showed Pākehā are nearly twice as likely to be let off by police for minor offences than Māori.

At the time, Julia Spelman, of advocacy group JustSpeak, said the figures from the report highlighted what was already known about institutional bias.

"I grew up in South Auckland in the late 60s, 70s and 80s and let's be really honest here, the police have always policed particularly South Auckland like that," said Sina Brown-Davis.

"But I think what happened on Saturday is they really took it up a level. So they might be more multicultural in their staff, but the way they police and treat our people hasn't really changed much.

"Just because you have a multicultural composition of your work-force, doesn't mean that your organisation is honouring the Treaty."

But she says she doesn't look at it and think 'Oh, great, brown cops.'

"I look at the police as a system of an institution which suffers from the same structural racism as every other mainstream institution that is built on the back of colonisation."

She said the police presence in Ōtāhuhu and at the semi-final game sent a very clear message to the community that they weren't to be trusted, so the video is "a completely different narrative from the reality of what police are actually like in the community."

Photographer Raymond Sagapolutele said the video was well-produced and funny, and it gets the message across that they're aiming for diversity but "when you live out this way, and you see the interactions we have, for a lot of kids around our area, that's not what we see."

"We're not seeing funny, running cops, or if we are, they're not being very funny. It's fun and laughs but, I don't want funny cops. I'd rather have cops that understand different communities."

He said he has had positive experiences with police, and knows there are cops who listen and take an even-handed approach.

Mr Sagapolutele recalls that as part of their Community Watch programme a meeting was set up with their community constable, who brought down a couple of the Manurewa police officers to have a street BBQ together with the neighbourhood.

He said children played touch with the cops, and it was an event where people gained an understanding of who their local police were.

"Kids got to see a friendlier side of the police force and we got to understand the backgrounds of some of these officers who were brought up these ways as well. It was really cool and we've maintained those relationships."

He said that is the impression he would like to see the police make, rather than them being the guys that take flags away from children.