This morning's game against the Barbarians represented two notable landmarks in All Black rugby. 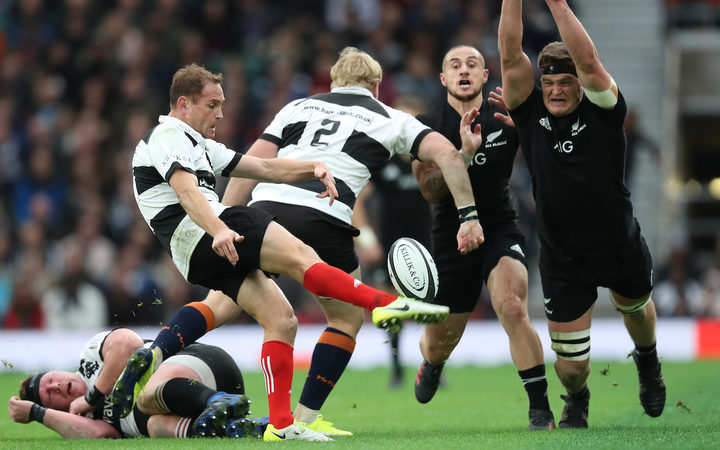 Firstly, it was more or less the first ever offshore All Black trial, funded by a third party and attended by a record crowd. Secondly, NZ Rugby were offering the game as a pay-per-view event, which you could watch as a one-off stream.

Just like last time, this end-of-year tour is quite clearly taking a very business-minded approach to the promotion of the All Blacks. Last November the All Blacks headed off on their biannual jaunt to Chicago as part of their agreement with AIG, then to a match in Paris to promote Adidas' new line of jerseys for both themselves and the French team.

This year it's a little more subtle, at least. The pay-per-view streaming service was always going to happen, ever since the day Sky took over the rights to screen All Black games. But the All Blacks have taken control of the stream themselves, offering it on their own website.

Will it fly? They've taken a softly, softly approach, limiting it to games on a relatively uninteresting end of year tour. The British and Irish Lions series and a couple of pulsating Rugby Championship wins over the Springboks and Wallabies have left All Black fans in no doubt that the hard work is done for the year, so now is the best time to do it.

We've had to pay to watch rugby in New Zealand for 21 years now, and Sky's increasing injection of pay-per-view fight sport events have made the transition to the previously unthinkable a far more acceptable prospect. Many thought nothing of parting with $60 to see Joseph Parker fight, and UFC fans regularly cough up smaller fees to catch their regular events.

However, NZ Rugby should be ready for the amount of backlash they're going to get when they try and run this service for a proper test match. Sky has already found this out the hard way - the fees for Parker's fights are regularly ridiculed on social media, and the explanation that the funding for the All Black programme has to come from somewhere probably isn't going to fly for the vast majority of keyboard warriors out there.

The co-opting of the Barbarians to suit the needs of the All Blacks does make some sense as well, given that if they didn't stack the team up with New Zealanders then they would have a hard time finding any players at this time of year. The game this morning fell outside the November test window, so no European players were able to be involved.

It was a pretty shambolic state of affairs, given that it was the historically UK-orientated club's 125th anniversary match. It's worth noting that the Baabaas have famously beaten the All Blacks twice, which is a better record than most test playing nations.

However, the inclusion of 12 New Zealanders - most notably the recently dropped Julian Savea - made for a highly interesting match-up. As well as this, it means that the All Blacks can now call on the likes of Richie Mo'unga, Dillon Hunt and Mitch Drummond as injury cover for the rest of the tour.

While this money talk is the reality of the modern era of rugby, it was refreshing to see that the game itself was a hark back to the old days. The Baabaas threw the ball around and the All Blacks followed suit in an entertaining game, and the home side even saved a trick for the last play when George Bridge ended up scoring off a teed-up cross kick.

Never mind that it should've never been awarded because ball holder Mitch Drummond was in front of the kicker - ref Nigel Owens was in on the gag too. A bit of fun on the business end of the year - just what the game needed.