And so our former dear leader runs into the land of the truly great - those who speak in the third person. 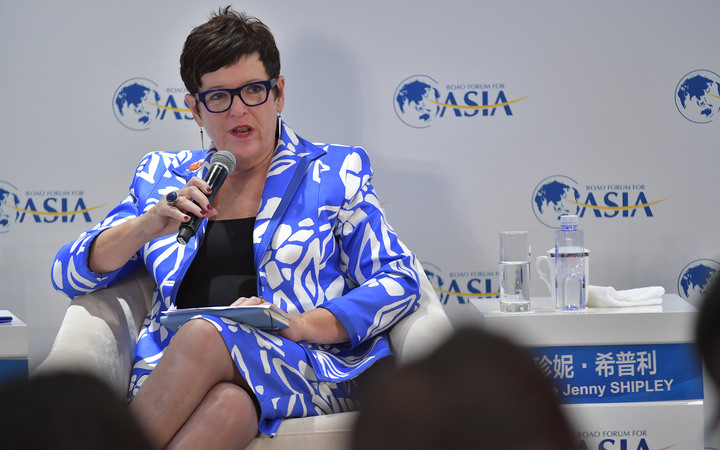 Dame Jenny Shipley addresses the audience at a conference this year in Qionghai, China, which possibly included a reference to herself in the third person. Photo: AFP

Shipley's turn in our series, The 9th Floor, which features five former PMs, is another gripping insight into how the minds of our great helms-people differ.

As interviewer Guyon Espiner notes, she is more open than the others (Sir Geoffrey Palmer, Mike Moore, Jim Bolger and Helen Clark) when talking about her "influences, conflicts and complexities of being Prime Minister". And has probably been dealt a rough hand when it comes to further study of her reign.

She is also, at times, what you could call "leaderful". Among the hallmarks of being leaderful are mixing metaphors (Shipley says at one point she's "not going to point the bone"), talk of exceptional happenings and speaking in the third person (illeism).

None are probably in De Gaulle's league. He, at times, had a messianic approach to, er, himself. He wrote of an assassination attempt: "Of the 150-odd bullets aimed at us, 14 strike our vehicle. Yet - none of us is hit."

Hoops god James retreated a long way up his own backside when announcing his reasons for joining the Miami Heat: "I wanted to do what was best, you know, for LeBron James, and what LeBron James was gonna do to make him happy."

Dole, meanwhile, gave the satirists a lot to work with after losing the New Hampshire primary and saying: "You're going to see the real Bob Dole out there from now on." The real Bob Dole suffered the fate of all the other Bob Doles - he lost.

And our red puppet friend likes to have his tummy tickled before saying "Elmo loves you", which is nice if not a little creepy sounding in the third person.

What illeism does is create an uncomfortable confusion. The brain freezes as it tries to work out, who the hell are you really talking about? Elaine Benes found this out in the best comedic treatment of third-person to date - the Seinfeld episode featuring Jimmy:

In the end, one question remains: When Shipley says to people the prime ministership doesn't define Jenny Shipley, what do they say in response?