Outspoken - Calls have gone out for a summit to kick around ideas to ensure New Zealand is fit to cope with the pressures of globalisation and inequality. 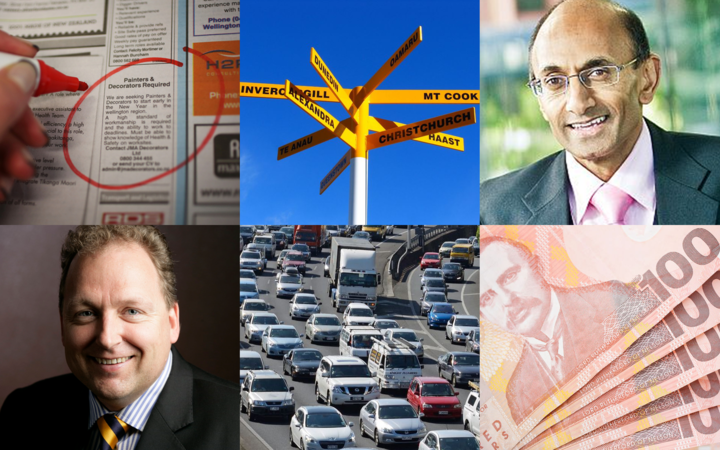 While the economy is one of the best performing among developed countries, there are nagging problems under the headlines such as weak productivity, a small export sector, persistent child poverty and growing homelessness.

"There is no signs of our incomes reconverging back to those of the richer countries in the OECD. That's been a goal of the last 30 years," former Reserve Bank official and now Croaking Cassandra blogger Michael Reddell said.

"There's nothing that's happening. No economic strategies. Nothing promised by the opposition that shows any sign of changing that."

Xero founder and managing director Rod Drury also lamented the lack of bold ideas from politicians to prepare the economy for the growing challenges of globalisation, automation and inequality.

He said another summit, like the 2009 jobs summit under former Prime Minister John Key, was needed.

"It was one of the things that showed there is a Team New Zealand. We had the unions, we had Laila [Harre], and all those sorts of people. It was a really positive discussion," Mr Drury said.

"The main thing that came out of it was the cycleways, but they've been amazing.

"If you look now, people are travelling there and doing all these sort of things. It's actually become part of all regional towns now, they have to have that investment," Mr Drury said.

BERL chief economist Ganesh Nana backed the idea of a summit, but said he hoped more could be achieved if it happened.

Dr Nana said the debate needed to include child poverty and inequality, with Brexit showing the growing frustration of people left behind by economies increasingly geared to precarious work.

But whether some broad consensus can be achieved about the best way forward is questionable. On hot-button problems such as immigration, commentators are divided about what the problems are and how they may be solved.

Mr Reddell said the influx of foreigners was not working to help build a sustainable, export dominated economy.

"Our business sector has to constantly re-orientate itself towards meeting the physical capital demands of a rapidly growing population - more houses, more roads. All that non-tradeable sector stuff. And there just isn't the room left for export-oriented business to grow."

"What we need to do is re-look at our migration policy in the context of a population policy. What is the level of population we want in New Zealand," he said.

"And I'll put my hand up and say that I'm one of the ones that believe that New Zealand has a small population in the context of the resources we've got here," Dr Nana said.

The desirability of a larger Auckland was also contentious.

"Let's make a decision. Let's add a million more people," Mr Drury said. "So we can do another harbour crossing, so we can do a train out to the airport."

Mr Reddell was sceptical, saying doubling the size of Auckland would be "digging a bigger, deeper hole" given the economic underperformance of the city relative to the rest of the country over the last 15 years.

"There's no sign this agglomeration of Auckland is doing any good for Aucklanders, let alone the rest of the country."

In the end, it might all end up being nothing more than wishful thinking.

The government is unlikely to be moved by calls for a summit. With economic growth picking up pace and the prospect of rising surpluses, Prime Minister Bill English could be forgiven for thinking he has got the mix right - at least for now.

Outspoken is a series in which RNZ's most experienced correspondents host debates on some of the top issues of the year - and the year ahead. Check back for new episodes here.