Analysis: Donald Trump has now seen the evidence that Russian government hackers were behind the cyber-attack on the Democratic Party during the US election campaign. 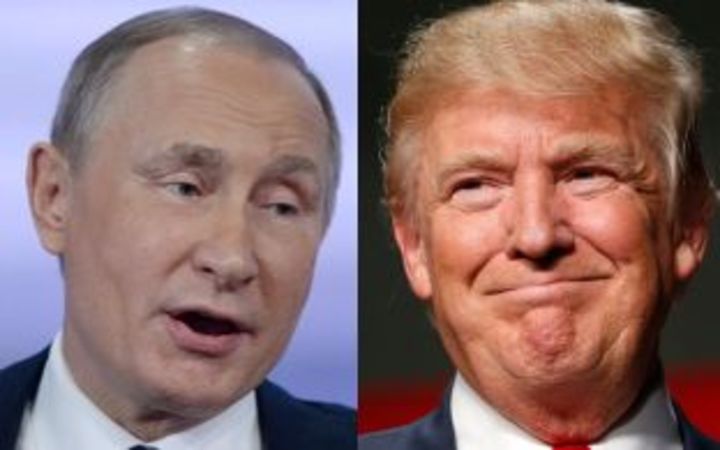 He's dismissed the reports for weeks, urging the country to "move on" and suggesting things would just be a lot better if the US chose to "get along" with its Cold War foe.

After the report's release Mr Trump posted a series of tweets condemning those who oppose good relations with Russia as "'stupid' people, or fools".

Having a good relationship with Russia is a good thing, not a bad thing. Only "stupid" people, or fools, would think that it is bad! We.....

But for the first time, an enemy of the US state has been exposed as having an active role in influencing the next US President.

It's being described in Washington as the biggest political heist since Watergate, or since Russian spies Julius and Ethel Rosenberg stole the plans for the atomic bomb in the late 1940s.

The report outlines how Russia carried out a comprehensive cyber-campaign to upend the US presidential election, an operation that was ordered by Russian President Vladimir Putin and "aspired to help" elect Donald Trump by discrediting his Democratic rival, Hillary Clinton.

The report describes Russian interference as unprecedented in scale, saying that Moscow's assault represented "a significant escalation in directness, level of activity, and scope of effort" beyond previous election-related espionage.

"Russia's goals were to undermine public faith in the US democratic process, denigrate Secretary Clinton, and harm her electability and potential presidency. We further assess Putin and the Russian government developed a clear preference for President-elect Trump," stated the US intelligence report.

Following yesterday's briefing, Mr Trump emerged with a seeming acceptance that the hacking had occurred, but claimed that it didn't help him win the White House.

With the inauguration just a couple of weeks away the biggest question in Washington right now concerns Mr Trump's foreign policy towards Russia. 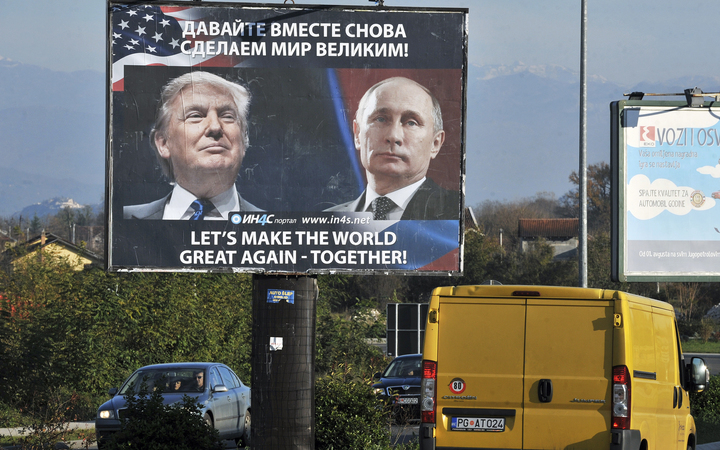 A billboard in Montenegro sums up a possible future policy direction. Photo: AFP

The impact of the hacking scandal is yet to play out, but it's just one of a number of issues around Mr Trump's foreign policy towards Russia.

Will he, despite the past kind words towards Mr Putin, adopt a traditional Republican stance, or will he do what he said he would in the campaign - move to drop the sanctions imposed over Russia's occupation of the Ukraine, and accept the result of some naked military aggression?

Many of Trump's advisors have close links to Russia, including his new Secretary of State, the Exxon CEO Rex Tillerson.

And, while the president-elect's tax records remain private (while "under audit"), the extent of his global business empire's relationship with Russia's oligarchs still remains under wraps.

Flowing from Russia of course will be his attitude to NATO, and its smaller members who apparently don't contribute enough to its funding.

Mr Trump says NATO is outmoded and the US pays too much for it. Does he pull out? NATO has been the bedrock of US foreign policy since 1949, and is hated by the Russian President, who would love to see it disabled, or even collapse.

As well as Ukraine, Russia has troops in Georgia, and is currently building up military assets on its borders with Estonia and Latvia, both members of NATO. If Russia crosses the border, does Mr Trump react, or watch the rest of NATO go it alone in defending those tiny nations?"

Presently Mr Putin has virtually everything he wanted from the Ukraine adventure; a constitutionally sanctioned autonomous territory on his border, controlled by armed militia with a supporting judiciary and local administration.

On top of that it looks increasingly likely political changes inside Ukraine will inevitably bring a far more Moscow-centric leadership to power.

The EU and US (under Obama at least) have held to economic sanctions on Russia as a firm signal to Mr Putin that his moves into Ukraine and his ability to be taken seriously as a world power are interwoven. Mr Putin believes he can balance both with Mr Trump.

Mr Putin's other major statement of Russian power and influence has of course been his armed support for the beleaguered Damascus regime of Bashar al-Assad.

Again, Mr Putin has pretty much what he wants, with the Russian air strikes in Aleppo leading to the collapse of the more moderate rebel groupings.

The rebel's final stand would appear to be in Idlib - that's if the proposed peace talks slated for later in the month come to nothing.

Russia has no interest in having a failed state in Syria, and its announcement of a permanent naval base to be built at Tartus Port in Syria shows its modern belief in its military prerogative in the Middle East as a whole, which harks back to the 19th century.

Mr Obama and Mr Putin started their relationship in a vaguely positive way, but as has usually been the case in US-Russian relations, there came a time and an issue that saw relations break down. In Mr Obama's case it was Syria and the Crimea.

Mr Putin's foreign policy agenda can be boiled down to Syria, Ukraine, sanctions, and Baltic States. He has the first two sorted, and he's hoping Donald Trump can help him along with the others.

Of course with the election of Mr Trump the US relationship with Russia may be about to turn in a direction that (once again) the pundits did not see coming - a new era of what they used to call "détente".

"Détente" could see the US and Russia joining forces to help destroy IS in the Middle East, if, perhaps the Obama-era idea of "regime change" in Damascus is dropped.

The US sanctions could then be dropped, Mr Putin would then win re-election on a platform of successfully-deployed Russian power and influence as it takes its perceived rightful place as a world power.

For his part, Mr Putin will also repeat his demand of an end to NATO expansion, an end to military deployments and NATO missile systems near Russian borders, and a withdrawal of US support for the current Ukraine government.

Right now, it seems quite possible Mr Trump could accede to all of this.

In return he would no doubt get an agreement from the Kremlin to pull back from its current official anti-Americanism, and perhaps even an agreement to halt cyber-attacks on the US (should they even admit to them).

He may also get an agreement for Russian help dealing with Iran over a re-negotiated nuclear arms agreement between the US and Iran, or pressuring China to reign in an unpredictable leadership in North Korea - especially if the US relationship with China goes sour.

But the sort of détente envisaged by Mr Putin would surely be his opportunity to reset the international order in way that would allow further expansions like the Ukraine, with little benefit to the international community, but a great deal of benefit to Mr Putin and his plans to "make Russia great again".

It's merely a matter of time before Putin puts Trump to the test.

The Russian economy is in the doldrums, with the standard of living declining due to lower oil prices and other economic issues.

The Russian people are fed a diet of neo-imperialist grandstanding in Syria and Ukraine, while the sanctions continue to bite.

Mr Putin faces an election in 2018, and a showdown with the US will be greatly to his advantage.

Both presidents may envisage a honeymoon period, but don't expect that to last. Inevitably, Mr Putin will defy Washington, or the EU, or the UN, and the tensions will again ramp up.

If President Trump comes through with policy to match his perceived pro-Russian attitude, Mr Putin will win the geopolitical influence he craves and the domestic support he needs.

In Washington, Mr Trump may well get the breakdown of the post-World War II world order as his legacy.