Opinion - Two sisters' courageous decision to help other sexual violence survivors will hopefully be a reminder that support is out there, and it's never the victim's fault, writes Wellington Rape Crisis manager Eleanor Butterworth. 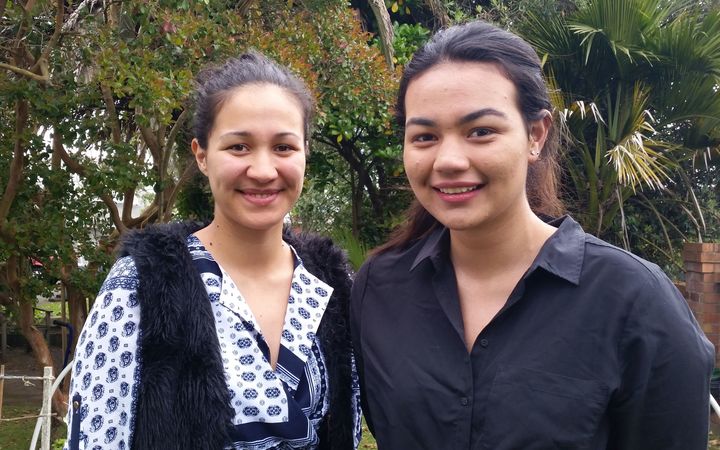 Celeste, left, and Tiana Smith have waived their right to anonymity so they can name their step-father who has been convicted of sexually abusing them. Photo: RNZ / Anusha Bradley

Two more courageous young women have given up their right to name suppression and anonymity in order to help other survivors of sexual violence share their experiences, and break down the stigma that still accompanies so many people's experience of violence.

As people working in an agency for survivors of sexual violence, we know how powerful the impact will be for others. When women MPs last year 'outed' themselves as survivors, we received calls from people in the community sharing their reactions. They felt sadness that it happened to so many people ('even those successful women' was one shocked reaction) admiration for the bravery it took, solidarity with someone they'd never met and the reminders of their own experiences.

Sometimes we get more self-referrals from people who have had similar experiences and feel emboldened to seek support. Sometimes it can confirm for a survivor what they experienced was not okay, and sometimes it is even because they have been victims of the same person in the story.

We have also had questions this year about why people are choosing to share these stories, and I think it comes down to a lot of the reasons Tiana and Celeste Smith have articulated.

Survivors of sexual violence are just that: they have survived something, they have a story to tell, they are experts on the ways abuse makes you feel, the fears that keep you silent, the tactics an abusive person uses against you; and they hope by opening themselves up, even one person will have that pain lessened.

The selflessness of survivors in their mission to support others, whether publicly or privately, never ceases to amaze me and provides endless hopefulness for the good humans can also do.

Just as abuse and violence is never the individual's fault and not within their control, we believe that healing, and what that journey looks like, should be in the hands of the survivor. For some people, part of having that control is being able to share their experiences.

Emily Doe, who was sexually assaulted by Brock Turner, maintained her anonymity but gave the world insight into the deeply human experience of rape, with a victim impact statement that went viral around the world.

It was an action that unequivocally flipped on its head the image of the victim so often portrayed in the media coverage of trials: what she was drinking, wearing or doing that could be seen as consent. Instead, she shared her experience in all its rawness in a way that gave the world context for who she was and who any survivor might be: a daughter, a sister, someone who dances 'round the lounge, teasing their little sister and being silly, before they go out.

Similarly this week, Tiana's and Celeste's stories, the words of their grandfather and mother, have reminded us that no survivor is an island, and of the pain a whole family experiences when faced with sexual abuse.

They have also provided us with examples of how to believe, love and support each other when faced with such an experience, which no family is ever prepared for but many families have endured.

We also need to acknowledge that part of the reason it is so effective to have survivors speak publicly is our ongoing community disbelief about the incidence and impact of sexual violence. A challenge for New Zealand going forward is to accept that this happens with alarming regularity and we need to find a way to trust survivors' stories and wisdom while giving them the level of privacy they dictate.

Hopefully the goodness that will come from this story is a reminder to all of us to believe and to support, and to know that there is help out there if you need it, because - to quote Celeste Smith - "Hey, it's not your fault."