Opinion - Donald Trump's refusal to reveal if he will accept the result of the US presidential election might make great reality TV, but is an insult to democracy, writes Phil Smith. 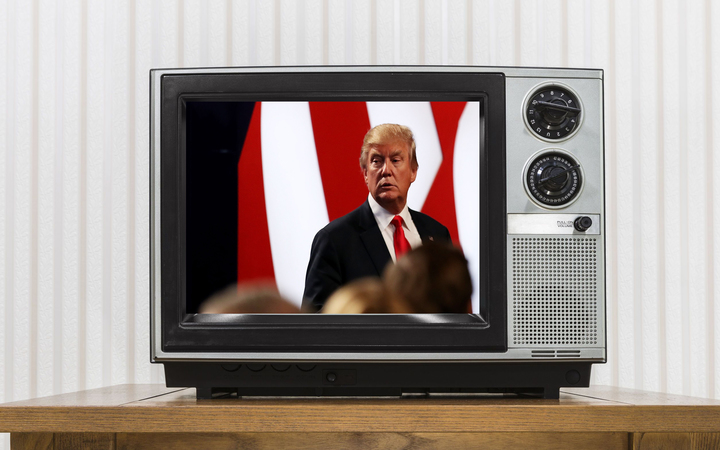 Donald Trump might be lining up for his own television channel if he loses the US presidential election. Photo: AFP / RNZ

Coming into this last debate, the Republican candidate had nothing to play for but pride (and a future audience for Trump TV).

He had to display a steady temperament and hope for a miracle. Hillary Clinton, for the Democrats, had to play a steady hand and not provide said miracle. There was no miracle.

There were, however, several jaw-dropping moments. So that by the end, I was wondering how it must feel to be Republican Party chairman Reince Priebus watching the debate, or Vladimir Putin, or any American who cares about the health of their democracy and society.

On more than one occasion, confronted with less-than-defensible actions, Donald Trump responded with the sentiment that if she didn't like his actions, she should have "made it impossible for me to do that". It sounded eerily similar to, "And when you're a star, they let you do it. You can do anything."

But it was also a wide-open opportunity for fresh attack ads pointing out that someone that believes it's OK to abuse their power, until they are stopped, should be stopped before they are given the most powerful job possible.

But much worse was Mr Trump demonstrating that he truly believed America's democracy was a reality television show. Following up on Mr Trump's claims that the election was rigged, the moderator, Chris Wallace, implored:

"But sir, a tradition in this country is the peaceful transition of power and that no matter how hard fought a campaign is, that at the end of the campaign, that the loser concedes to the winner, and that the country comes together in part for the good of the country, are you saying that you are not prepared now to commit to that principle?"

To which Mr Trump responded:

"What I'm saying now is I will tell you at the time. I will keep you in suspense, OK?"

Da, da, da, dum… "Coming up after the break on Get Me Out of Here, I'm a Rational Citizen: Will Donald accept the tribe's decision? How will Hillary react? Will there be bloodshed? Stay tuned."

It is no small thing to take a founding principle of democracy and toy with it publicly, teasing the voters about whether you will attempt to burn down the very foundations of their society. It is not just massively injurious to the social contract, it is frankly unhinged.

So, what were those three debate watchers thinking - Priebus, Putin and poor benighted Joe Public?

I imagine Reince Priebus watching through his fingers and muttering "why me?" as the last vestiges of Mr Trump's chances race off over the horizon. His every effort now will be to protect the Republican Senate majority and use it to stonewall a presumed President Clinton.

His frustration will be that he did everything to make a win possible. He commissioned a post-mortem after the loss to Barack Obama. The resulting report very carefully outlined exactly which messages were needed, and what demographic groups were necessary for a win. His candidate has done the exact opposite at every opportunity. Mr Priebus will get much blame for the damage this election has done to the party, but he holds only small fault.

Watching in a dacha

I imagine while Mr Putin watched he was wishing that unwitting puppets were more reliable. It has been a dangerous game attempting to interfere in an American election and Mr Putin now has to decide whether to give it up as a lost cause or to throw the kitchen sink at it.

He hasn't brought out the big guns yet, but at this point they might not change the outcome and the blowback might not be worth the attempt.

Apparently, on previous occasions when Russia has used these tactics, there has been a predictable pattern. For the first week or two they release real hacked documents so that people get comfortable with them being real. They then start adding in altered documents. Reports indicate that this may have begun on a small scale. But, as yet, there have been no killer releases.

Arguably, Mrs Clinton's debate statement today about "Russian espionage against Americans, from the highest levels of the Russian government" was partly preparing for a defence against such an escalation. But will it even come?

Mr Putin is a clever strategist and tends to play hands he knows he will win. He may be waiting for the most damaging moment, or he may have accepted the election as lost and be congratulating himself for what has happened: the dimming of American democracy as "a shining beacon", envied by states within the Russian sphere of influence.

Reince may be sobbing into his mint julep and Vladimir may be consoling himself with fermented potatoes and caviar, but the most upset watcher of today's debate will have been any citizen who genuinely cares about the health of America's democracy and the social contract.

That viewer was probably hiding behind the couch, ducking the flying insults and blocking their ears to the interjections, falsehoods and shouting. That viewer might have been dreaming of a different era not so long ago when politicians disagreed respectfully and wished each other well.

Something that reverberated online just after the debate finished was a photo of the hand-written handover note that George Bush Sr left on the huge Oval Office desk for Bill Clinton on Mr Clinton's inauguration day in 1993. It shows George HW Bush to be a real gentleman and illustrates a kinder, gentler age. One that many Americans must be desperately wishing for again about now.

"When I walked into this office just now I felt the same sense of wonder and respect that I felt four years ago. I know you will feel that, too.

"I wish you great happiness here. I never felt the loneliness some Presidents have described.

"There will be very tough times, made even more difficult by criticism you may not think is fair. I'm not a very good one to give advice; but just don't let the critics discourage you or push you off course.

"You will be our President when you read this note. I wish you well. I wish your family well.

"Your success now is our country's success. I am rooting hard for you.