Opinion - When our Helen was a young woman of intelligence and ambition she probably swore to herself that she would never be a secretary. Sadly, that is looking increasingly likely.

In fact, despite all the dire headlines, Helen Clark's results in the most recent United Nations Secretary-General straw poll were identical to what she managed last time - she remains in seventh place - while most candidates' numbers worsened. Consistency, however, isn't the winning formula. 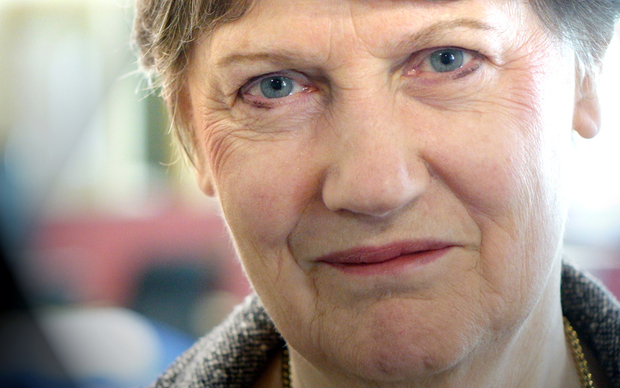 The United Nations Secretary-General is in many respects little more than an administrative figurehead but it does have one huge power and responsibility - appointing the Secretariat, the heads of all the UN bodies. Through them the Secretary-General can wield huge influence. They seldom do, but they can.

And how is it chosen?

This is the nub. The Secretary-General is approved by the General Assembly on the recommendation of the Security Council. But there is no strict process, no clear timeline and no list of competencies. Think of it as a job interview with 15 interviewers and every one of them has a different agenda. Worse, some of them hate each other - so be careful who you smile at. Like most things at the UN, it's a long game of pin the tail on the compromise.

That 15-member interview panel is the Security Council. All of them get to vote (including New Zealand), but the five permanent members (Russia, China, USA, UK and France - the P5) get vetoes.

The selection process was once entirely opaque but is slowly emerging from smoky rooms and into the modern world. Of course, the backroom deals will still be legion, but now a simulacrum of process floats atop it all. The straw polls are meant to be secret but get leaked instantly.

The purpose of the straw polls is to winnow the field by making it obvious who has no chance. A candidate (there were originally 12) departed after each of the first two straw polls. No one has yet pulled out following the third poll this week.

In each poll the 15 member states rate each candidate, choosing to 'encourage', 'discourage', or offer 'no opinion'. Basically: we like you, we hate you, who are you anyway?

The tricky thing is, candidates know how many of each opinion they got but not from whom - particularly whether a country with a veto voted 'discourage' (which might become a veto, ruling them out).

In this week's poll the candidates from Costa Rica and Moldova (both women) each received 12 'discourage' votes and just two 'encourage' (net -10), so at least two of the five permanent members voted against each of them. I would expect at least a couple of graceful exits soon, leaving eight or fewer candidates. 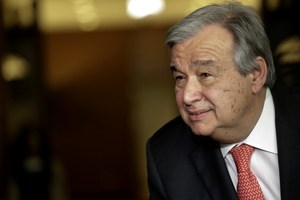 Portugal's António Guterres is in the lead. Photo: AFP

Brace yourself. If those two candidates depart, Miss Clark will be coming last (in net votes) with six 'encourage' and eight 'discourage' votes (net -2). It's possible she may also pull out of the race. But she may hang in there hoping to be a compromise candidate.

The candidates ahead of her have net counts of -1, -1, 0, 2, 2, 4 and 8. The clear leader is António Guterres of Portugal (with 11 'encourage', three 'discourage', one 'no opinion'). His nearest rivals are Miroslav Lajčák of Slovakia (9, 5, 1), Vuk Jeremić of Serbia (7, 5, 3) and Irina Bokova of Bulgaria (7, 5, 3). It's still wide open because any one of those 'discourage' votes could become a veto. And every single candidate received at least one 'no opinion' (so possibly one major power is being inscrutable until the last minute).

There seems to be a gender bias

Six of the original 12 candidates were women, but only one of the current leading four is female. Gender bias is a strong UN tradition. Anne Marie Goetz, a former senior UN staffer now at New York university notes that in this race the very things that make the male candidates appear seasoned or charismatic have led to the women being considered insiders or 'adversarial'. This counts against Miss Clark (and half the candidates for having the effrontery to be born women).

…and a regional one

Eight of the original 12 candidates were from Eastern Europe. Six remain. This year was meant to be 'their turn'. This is how the UN works. Deals and trade-offs mean that certain countries 'own' certain jobs, and blocks of countries take turns at others. It's like taking turns in the sandpit at kindergarten. That's how New Zealand gets to have occasional spots on the Security Council (under 'Western Europe and Other').

There have been three Secretary-Generals from Western Europe, two each from Asia and Africa, and one from Latin America, but none from Eastern Europe. Of course, until 30 years ago most of Eastern Europe was one permanent member country, the USSR, but that's history. Because it was 'their turn' lots of hats went into the ring (not unlike the plethora of Republican Party candidates vying for the US presidency this year). However, with the tension and distrust around Ukraine and Syria, it is uncertain whether an Eastern European candidate exists that all permanent member countries (known as P5 countries) will agree on. This helps Miss Clark, though it works against her that she is considered to be from Western Europe (and Other), which has supplied the Secretary-General most often.

Can Our Helen bring it home?

Obviously, like at FIFA and the International Olympic Committee, everyone just cares about world peace and doing what's best. That being true, here's how you win the prize:

1. Be nice. It's vital to be acceptable to all of the P5 countries. Each will look to eliminate those antagonistic to themselves. (This works against Moldova, Montenegro and Argentina.)

2. But not too nice. It's equally vital not be seen by any of them as in favour of any of the others. They will each look to eliminate those they think are friendly to their rivals. (This works against Serbia and Argentina.)

3. Be a wimp. The P5 would prefer you were weak and easy to bully. (Miss Clark may personally fall down here.) And I wonder whether the New Zealand government may suddenly be "shocked, shocked to find that [steel dumping is going on in here"] once China's veto is no longer an issue.

4. Don't be opinionated. Having an opinion on Ukraine, Syria, the South China Sea or anything else controversial may well disqualify you. (Miss Clark may also fall down here.)

5. Dance on the head of a pin. Do 1 through 4 above to avoid a veto, while trying to appeal to the other 10 non-permanent members of the Security Council (currently Egypt, Senegal, Japan, Uruguay, Ukraine, Angola, Malaysia, Venezuela, New Zealand and Spain). For extra points do it backwards, and in heels.

6. Be male. Yes, depressing. This also counts against Miss Clark. Her being strongly gender-equality oriented doubles down on that. The UN doesn't look ready yet.

6. Buy it. This is not corruption, this is geopolitics. France blocked former Secretary-General Kofi Annan until it was promised the peacekeeping secretariat role. This time China is reportedly making similar noises. South Korea signed off trade deals with possible supporters to help get Ban Ki-moon (the outgoing Secretary-General) in the job. New Zealand Prime Minister John Key doesn't have much to offer on Miss Clark's behalf - we already tend to lie back and think of England every time we're offered a trade deal.

So not much chance then?

Not really, no, but then Miss Clark was probably never at the top of anyone's prediction list outside Godzone. The lack of a timeline or any actual rules for this recruitment process means it's feasible that new candidates could enter the race up to the last minute. It's been suggested that some of the P5 powers may have one or two options up their sleeves.

But it isn't over yet. Ultimately the person chosen will be the one that is the least hated by the most countries and acceptable to all of the P5 powers. New Zealand is just possibly inconsequential enough to shine through at the end.

*Phil Smith is a journalist who has wasted his adult life revelling in the entertaining minutiae of foreign politics. He once shared a lunch of rare bison steaks with Jimmy Carter.