Brexit is a portmanteau of the words Britain and exit.

Brangelina is a portmanteau of the names Brad and Angelina but otherwise not very much like Brexit, which is more like Grexit.

Grexit is a portmanteau of the words Greece and exit, which, much like Brexit, is a coinage that invites thoughts of breakfast cereals for professionals on the go.

What is being exited?

The European Union. Greece hasn't exited the EU, though its membership of the 28-country club, which at its core provides free movement of capital and people, hung in the balance for some time owing to economic meltdown. Britain's economy is relatively robust - and unlike Greece it is not a member of the "eurozone", which shares a currency - but on 23 June they will vote on whether to quit the group founded after the second world war, spurred on by the view that closer economic and political cooperation would disincline nations from wanting to kill and conquer each other so much.

So David Cameron's Conservatives want out?

Then why the referendum?

Are you asking about the genesis of the Brexodus?

Once upon a time, or early in 2013, Prime Minister David Cameron announced he would campaign at the next election on holding a referendum. He was responding to pressure from his own party, as well as the growth in popularity of the UK Independence Party, which was busily encroaching on Tory territory. He said he would seek concessions to liberate Britain from the EU shackles and then, all going well, campaign to remain. That placated many of his backbenchers, but still seemed something of a remote possibility, especially given his coalition partner, the Liberal Democrats, were so vocally Europhile. But then, defying most of the pollsters, the Conservatives won outright in 2015, and the referendum was go.

Did he seek those concessions?

He did. At a summit earlier this year, Cameron received undertakings that granted Britain what he called a "special" status. The deal included limits on benefits granted to new migrants and a clear exemption from the wider EU aspiration to an "ever closer union". These were dismissed by pro-Brexiteers as woefully inadequate.

Who are the big names backing exit?

Captions, if that's not too much trouble?

Abu Bakr al-Baghdadi? The head of Isis? What a cheap stunt.

Quite. You should take that up with David Cameron, for it was he who said that Abu Bakr al-Baghdadi would love the idea of Britain leaving Europe.

And what happened to the Queen?

Well spotted. Bit of an administrative error, that. Thing is, the normally completely authoritative newspaper The Sun reported that the Queen was totes Brexitatious, but then the press regulator made them print a retraction because their evidence was less reliable than a corgi's bladder.

And who are the big names backing remain?

And their names, please.

Come on. Adolf Hitler? This is becoming a joke.

Yes it is. And you should take that up with Boris Johnson, who invoked the Nazi leader as part of his pro-Brexit case, saying the EU was pursuing a European super-state just like Hitler did.

What is Boris Johnson playing at?

He may be making a principled case based on his own convictions, but the considered view of the Toby & Toby Cartoonish Foreign Leaders Assessment Committee is that the Conservative MP turned Mayor of London turned Conservative MP again is attempting to establish himself as the next party leader (Cameron has already said he won't contest the next election, but were the referendum to go against him he'd probably chuck it in swiftly).

What are the exit proponents' main arguments?

The leave crew which includes slightly less than half of all Conservative MPs and a handful of Labour MPs, has put forward a range of arguments in favour of leaving the EU, including the impact, economically and/or culturally of immigration from Europe and the spectre of a widened EU including Turkey. Many warn Europe is moving towards federation and further corrosion of national sovereignty. They also bemoan the cost - the UK is a net contributor - and a tiresome bureaucracy that dictates, for example, how bendy a banana must be.

Was that true about bendy bananas?

There was never a ban per se, but the EU did take a weird interest in issues of bananas with "abnormal curvature". In any case, they scrapped all that.

And the stay camp?

The remainers, including most of Cabinet and the vast majority of Labour MPs, challenge the picture of immigration "influx" painted by their opponents. They emphasise the security and stability provided by the EU, the ease of travel, and, especially, the economic impact of exit.

What would the economic impact be?

Ugly, according to a UK Treasury report published this week, which showed they'd be tipped into a "DIY recession", in the words of the chancellor, George Osborne. The analysis also predicted a sharp rise in inflation and potential job loss of up to 820,000.

Don't suppose the leave camp dismissed the analysis out of hand?

The leave camp dismissed the analysis out of hand, calling it "categorically unfair and biased".

Has any state quit the EU before?

No. But Greenland, a territory of the Danish realm, voted to leave the European Economic Community (the EU predecessor) in the 1970s.

They hadn't thought of such a splendid cereal-evoking shorthand back then.

How are the polls looking?

The wind appears to be at the remain-camp's backs, with the latest Opinium/Observer poll putting remain at 44 percent, leave on 40 percent and 14 percent undecided.

An ORB poll for the Telegraph suggests the gap is wider still. Gambling predictor markets put the chances of a remain-vote at higher than 75 percent. 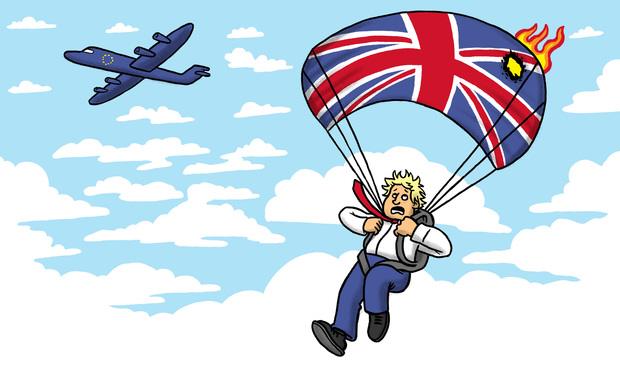 And what of Scotland?

Polls put Scottish support for remaining part of the EU way out in front. Were Britain overall to vote to leave it would therefore embolden calls for Scukxiteuntry.

Scotland exit from the United Kingdom followed by re-entry to the European Union.

Looks as though they'll Bremain.