OPINION: If winners are grinners, it wasn't hard to see who was claiming victory after Prime Minister John Key's ejection from Parliament on Wednesday.

Far from looking chastened at being booted from the house, Mr Key was smiling. By Thursday morning he was laughing about the incident on More FM, saying his wife had told him to write lines in penance: "I've done my lines, I wrote 500 out." 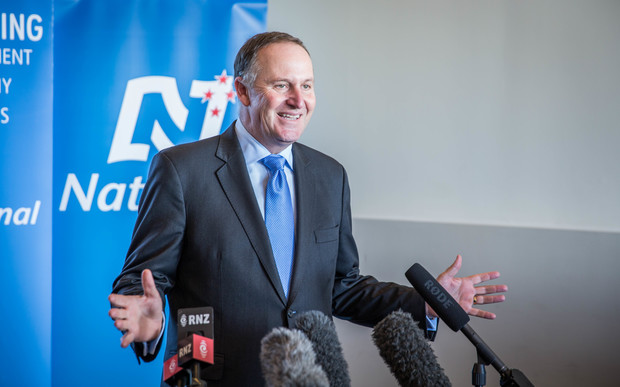 John Key was once known in the corporate world as The Smiling Assasin. Photo: RNZ / Claire Eastham-Farrelly

To be fair, he seemed rather pleased with himself even before the Speaker took action, but the punishment apparently did little to dampen his mood.

His first ejection from the house as prime minister (a fate also suffered by predecessors Helen Clark and David Lange) was administered as he answered, with typical hammy brio, a question from Greens co-leader James Shaw, who wanted him to apologise for having dragged Greenpeace and Amnesty International into debate over the Panama Papers.

Apparently unable to contain his enthusiasm for the fray, he carried on counter-punching when Parliament's referee had effectively called "break", thereby earning himself an early exit.

This was all too neat for critics on social media who reckoned he had got himself thrown out to avoid answering more questions about those problematic Panama Papers.

It's disappointing that more people don't see Key getting kicked out of the House for what it is: a cynical way to avoid answering questions

But that wasn't the interpretation Mr Shaw and Labour leader Andrew Little gave in a joint stand-up immediately afterwards. "He basically lost control of himself in the house," said Mr Shaw.

Mr Little reckoned that Mr Key's aim was distraction and that when that didn't work he demeaned people: "He lost control."

But he and Mr Key's other opponents can't have it both ways. Did he lose control of himself or not? Is he cracking under the strain or cunningly taking advantage of Parliamentary process?

His deputy, Bill English, who was left to answer questions on his behalf, unsurprisingly declared Mr Key's defiance of the Speaker to have been accidental: "He was simply addressing the Greens vigorously and didn't see the Speaker stand up."

Cock-up rather than conspiracy, in other words.

Ultimately, it's impossible to prove otherwise. And either way, Mr Key's Parliamentary opponents have been left swinging at clean air.

Maybe the prime minister was happy to be banished, but he was hardly taking a battering beforehand.

While debate will continue about New Zealand's foreign trusts industry, the Panama Papers have yet to deliver the deadly anti-Key ammunition his opponents would love to uncover.

If they had, would the Parliamentary attack have been so focused on the relative sideshow of getting an apology for Greenpeace and Amnesty International?

In a week that might have turned out far worse for him, Mr Key's buoyancy is understandable.

Other stories have come along. Some, such as the foreign house-buyer issue, fed by the government, others generated by the business world (that proposed merger between media giants NZME and Fairfax NZ) and the circus around reality TV show The Bachelor.

Despite all the smiles, Mr Key won't be letting his guard down any time soon.

Through polling and the government's prerogative of actually doing things - not least through the upcoming budget - he'll work tirelessly to keep a step ahead of his rivals, while maintaining the "relaxed" public face that works so well for him.

Don't forget that he was known in the corporate world as The Smiling Assassin.

While his opponents struggle to make some concrete gains from the Panama Papers, expect the grinning to continue.

*Bevan Rapson is an Auckland journalist, political columnist for North & South and a former editor of Metro.