Well, that's that. The votes are counted and at last the shambolic flag saga is finally over, banished to eternal life as a series of pub quiz trivia questions. An embarrassing phase best forgotten like a national bad haircut.

As much as I've always wanted a change, in the end I think we made the right choice. So why do I feel so rotten? 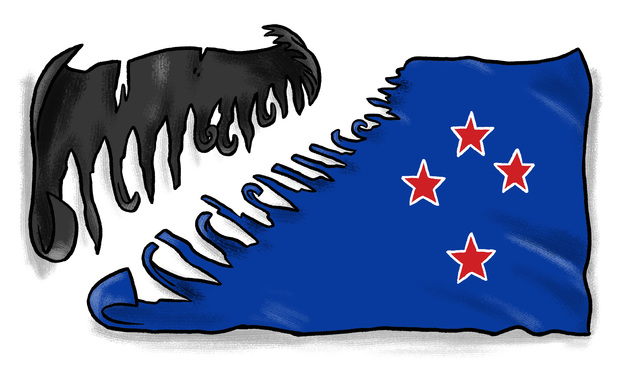 I had a bad feeling about it from the start, and I wasn't alone. This time last year, anyone who has ever worked on any kind of corporate creative brief took one look at the chosen panel and their proposed process and saw that it would result in a mediocre, safe choice. It was creativity by committee, with no designers involved, and a process that allowed no room for development or refinement.

So we expected the worst, but like George W Bush said, we 'misunderestimated' them. Things went from worst to 'worster' as they lurched from one disastrous step to another. An inane and vague campaign to engage people about what they stood for led to the saddest road trip ever as the panel toured the country for public meetings with record low turnouts. No one was interested.

By the time the public was able to submit entries, the mood became more evident. I love a good Lazar kiwi, don't get me wrong, but the message was clear. In large numbers, we were treating the flag process as a huge joke.

Things continued to go downhill. The panel released a long list of forty designs, and at this point the desired result became clear. Ferns, ferns, ferns and a couple more ferns. Literal symbols, and no meaningful attempts to engage or explore Māori ideas or motifs. In a wild coincidence, these ferns were exactly in line with what John Key had been saying he personally wanted all long. So strange.

John himself muddled in and out of the debate, never quite joining and never quite leaving, and in doing so left room for his most rabid detractors to form angry factions that only served to muddy the water and make the whole drama even less appealing.

From there the panel whittled the long list down to four choices. Well, three and a bit choices really. But that's when something interesting finally happened. I've seen the Red Peak episode retroactively described as elitist and ultimately a failure, but to me that misses the point. It's the one sliver of hope in the whole story. Red Peak was a moment when the public - not all the public, sure, but some of the public, actually connected with the process in a sincere and constructive way.

They took the ball and ran with it, and to me it's the only moment the campaign really came alive, however briefly. Red Peak was positive. Hopeful. It had some energy, some momentum and some genuine engagement.

But of course, as we know now, "some momentum" and "some engagement" doesn't win elections, does it? The rest of the story you know, or possibly have already blocked out. Red Peak gets onto the ballot, and the Lockwood fern that most closely resembles the current flag wins the first referendum. Does its similarity to the current flag suggest a lack of desire for change? Should we split up, Scooby?

From there, the Lockwood ferns are hoisted around the country. Hold on, they look odd. Is the blue right? They fix the blue and hoist them again. They still look odd. Celebrities are wrangled onto platforms. The government abuses designers and intellectuals in a last-ditch desperation play.

And here we are. Back where we started. I could sit here and smugly say 'I hate to say I told you so', but I would actually hate to say that. I feel exhausted. A little bit sick. I could, instead, try to tell you how much better things might have gone if we'd only listened to the design community, but to be honest, I don't know if even that would have made a difference. Sure, I have no doubt that a smarter design process could have lead to a stronger alternative choice. No doubt at all. I'd argue too that greater creative industry involvement would have helped the panel do a better job of telling the story of a new alternative in a way that might draw people in and make them feel invested and included.

But would this hypothetical super flag have won? Maybe not. Because at the heart of this whole saga was one question that never got answered.

Without a reason for change, the process was aimless and directionless from the start. There was no movement, no impetus. We weren't reacting to any identity-shattering or identity-defining event. We were choosing the curtains for a house we hadn't built yet. Why? No one really knew.

And I think all the problems come back to this lack of purpose. The pointless intro campaign. The lack of early engagement. The mocking entries. The bland long list. John Key's "I'm involved, I'm not involved" flailing. There was a lot of flailing. No one knew where we were going, or why. People need a reason to care.

So where to from here? While we're on a roll, should we do a snazzy new anthem next? Take it up a notch and have a go at choosing an official hat?

Me, I'm exhausted. I'm going to bed for a while. Wake me when we're a republic.

*Toby Morris is an Auckland based illustrator and comic artist. He is the creator of the Pencilsword on The Wireless and also half of the Toby and Toby duo behind the series 'That is the question' at rnz.co.nz.