Didn't it, though? But here we are, at the end of April 2017, 100 days into the first term of the 45th president of the United States, Donald Trump. And the sky hasn't fallen.

For Hillary Clinton it has.

It has been a difficult few months for the vanquished Democrat candidate, no doubt about that.

To think, just this time last year, she looked unassailable, while few were sure Trump would win even the Republican nomination.

Is it possible to pick a moment when it all went right for the Donald?

Literally millions of words have been published and spluttered in trying to answer that question, but the general consensus is that the future president cemented his position as Republican favourite when he confidently asserted that his trousers housed a large penis. Equally important, perhaps, as the GOP grandees and other moderates within the Republicans (eg the Tea Party) pondered a Trump defenestration, was the revelation that a hardcore of supporters had registered the domain Trumpocrats.com in anticipation of his standing as an independent.

But what about the election itself?

No one needs reminding what happened there.

What is this, Wikipedia? Hillary Clinton was, obviously, on the brink of something special. But then came the fabled "October surprise", with the release of controversial emails triggering a precipitous polling collapse.

Could anyone have survived being caught saying something like that about Bill Murray?

Unlikely. It was unforgivable. The look on the face of Trump's running mate and now vice-president, Oprah Winfrey, spoke for a nation.

A hundred days, then. Amazing.

Do you have any more questions, loser?

The same way it always does, with the inaugural address.

What did he say?

The speech as distributed to the press corps centred on restoring American confidence and reshaping Washington, even pledging consensus-building. But as delivered, President Trump digressed at length. The address was most memorable for the altercation with an interjecting child, whom it later transpired had learning difficulties. Trump said the boy, Danny, looked "about as smart as an enchilada". A delighted Danny was later given a personal tour of the White House.

Except it's not called the White House any more, is it?

What sort of policy progress has the new president made?

It's mainly been about the wall.

And how has that gone?

Pretty much to plan. The wall, which will run almost 3000km along the Mexican border, is well under way, and Mexico has eagerly launched a crowdfunding campaign, having accepted that Trump's demand they should pay the estimated $8 billion cost is completely reasonable.

Such a relief. What else?

Trump has already followed through on campaign promises to put his mother on the $20 bill, to establish a congressional committee to investigate Barack Obama's birthplace, and to fire a gun wildly in the streets of Manhattan.

Impressive. What about the immigrant thing and the Muslim ban?

Yeah, good headway. The policy to expel 11 or so million unauthorised immigrants is taking shape, albeit it at a devastating cost to the economy and the labour market. The ban on Muslims entering America will kick in before long, once the usual haters and losers get over their tedious legal challenges, protests and civil disobedience.

I'd much rather not get into that.

How about in international relations?

The major summit involved a bear hunt with Vladimir Putin in Alaska. The two leaders, bare chested, announced a united strategy to contain the violence in Syria, while firing several rounds of short-range projectiles at snowmen wearing "Isis" bibs while shouting "global warming my ass" and calling Leonardo Di Caprio "a total pussy". There have also been talks with Australian prime minister Julie Bishop, while a significant diplomatic incident which saw several residents of the distant south pacific nation of New Zealand install nuclear shelters was sparked when the prime minister's son, Max Key, defeated Donald Trump Jr over nine holes of golf. A crisis was averted when the first lady, Melania, played the president some of the young New Zealander's banging dancefloor-filling tunes.

Secretary of state Denis Rodman has reopened talks with North Korea and there's a war with Iran could start any minute.

Just a war, no big deal.

Anything else to worry about?

It hasn't all gone smoothly. Press secretary Piers Morgan spends most of his media briefings constructing elaborate cricket analogies, and Congress has proved unwilling to sanction the president's attempt to nationalise Fox News, as well as his nomination of the Rob Lowe character Sam Seaborn for the Supreme Court judge vacancy.

Also there was the collapse in the currency. And the share market crash. And the China stand-off. And the putative impeachment proceedings.

I'd rather not get into that.

It's just I've got a wedding to go to San Francisco coming up and - well, just ask anyone who has enjoyed the attentions of Trump's Make American Media Great Again "improvement programme".

A hundred days in 25 words?

The tangerine wrecking ball smashed haters and losers, wackos and weaklings, the puppet politicians and the politically correct. And he refused to give up Twitter.

Relax, it's all totally impossible 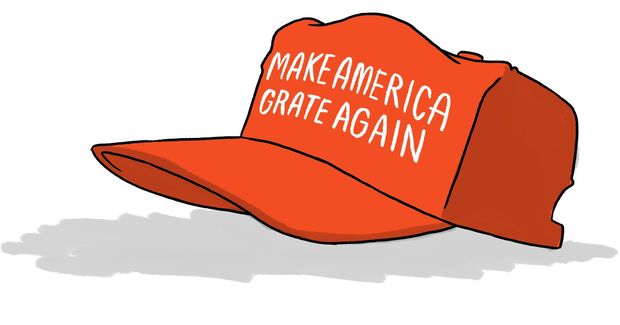