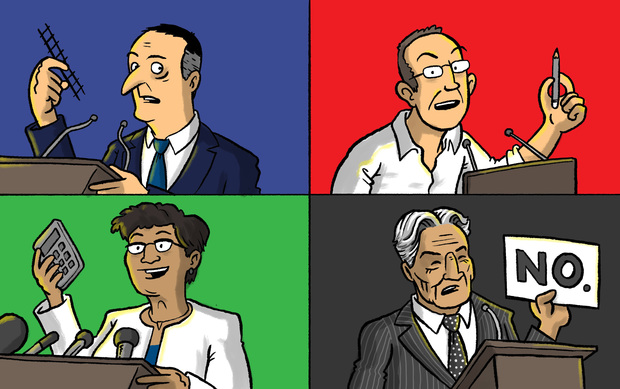 What are these state of the nation speeches of which you speak?

A series of curtain-raising addresses with absurdly grandiose "state of the nation" billing, delivered at the start of the political year.

Would you mind walking us through them?

Shall we start with National?

Let's. That was delivered to the Auckland Chamber of Commerce by John Key, the leader of the National Party and the prime minister of New Zealand.

An announcement to bring forward government funding for the Auckland Central Rail Link so major construction can begin in 2018.

Auckland mayor Len Brown led the congratulations, backed by business groups. Critics variously said they shouldn't have dragged their feet so long, that it was a bit rich after being so rude about the project in the past, and, in the case of Winston Peters, that it had been not a state of the nation but a "State of Auckland" speech.

Competitive, competitive, competitive. Confident. Auckland is an engine. Don't rock the boat. Or the train. We'll bring forward CRL funding, though not so far forward that we have to start paying for it for a good few years. We're the party of new ideas, including other people's. Also, vision, etc.

And how might it have played in the mythical Middle New Zealand?

They went al fresco, with leader Andrew Little addressing a picnic gathering in Albert Park, Auckland. It came as a relief to party bosses that not only did forecast thunderstorms fail to materialise, but there was also no heckling from David Shearer.

A new policy that would make the first three years of tertiary education exempt from tuition fees. Its entry would be staggered, and "fully implemented in 2025". Little said the plan, which would eventually cost $1.2bn a year, could be funded out of money earmarked for tax cuts.

The picnickers liked it, as did the Greens. NZ First's Tracey Martin reckoned they'd nicked it off them. Tertiary education minister Steven Joyce reckoned they'd nicked it from Internet-Mana, and launched a Twitter blitz denouncing a policy that would "take more than a billion dollars a year more off taxpayers to achieve absolutely nothing". John Key said it was unfair on waitresses.

How about that Phil Goff, eh? Anyway: insecurity, insecurity, insecurity. Tsunami of change. Robots versus Kiwi Dream. We're the party of new ideas. Boo TPP! Whadda we want? Free tertiary education. When do we want it? In a decade or so. Life is a car wash, just gotta ride it.

How might it have played in the mythical Middle New Zealand?

They have embraced picnic-based oratory in the past, but this year they went for a more studious setting, at the National Library in Wellington, where co-leader Metiria Turei spoke.

A proposal for a new unit within Treasury to cost parties' policy programmes at election time. Turei said she would seek support from across the house.

There was praise for a clearly targeted effort to characterise the Greens as a sober potential party of government. There were some criticisms that it was daft for the Greens to be cosying up to Treasury.

How about that cross-party support?

John Key kyboshed it almost immediately, saying it would cost too much, although he wasn't clear on what it would cost.

Perhaps Treasury could help with that.

Just how might it have played in the mythical Middle New Zealand?

What about New Zealand First?

Winston Peters addressed the Orewa Rotary Club, 12 years to the week after the famous speech by then National Party leader Don Brash - who was in the audience this time.

And were there echoes of Brash's "one rule for all" performance?

Why don't you ask that "what was the centrepiece" question?

An attack on "separatist" concessions in the Resource Management Act reform bill granted to the Maori Party in exchange for their support, an offer to support the bill if Treaty provisions are scrapped, and the exhortation of "one law for all".

Politicians, politicians, politicians. Everyone hates them. Thank goodness for the few who achieve extraordinary by-election triumphs. Things aren't what they used to be. They're worse. We're the party of old ideas. Foreign ownership, immigration, TPP, flag: a systematic plot to destroy our sovereignty. RMA? Ruinous Maori Amendments. Brownmail! Google it!

And in mythical Middle New Zealand?

What about the smaller parties?

Nothing from the Maori Party, though they did condemn Peters' speech as misinformation "tapping into people's irrational fears". Peter Dunne issued a press release calling the speech season a farce, full of "ritual chest-thumping and knuckle dragging behaviour".

Their guy was too busy on Netflix and chilling.