Three years after a massive quake struck off the coast of Japan, the rubble has been cleared and the infrastructure largely restored, but the rebuild has been slow. 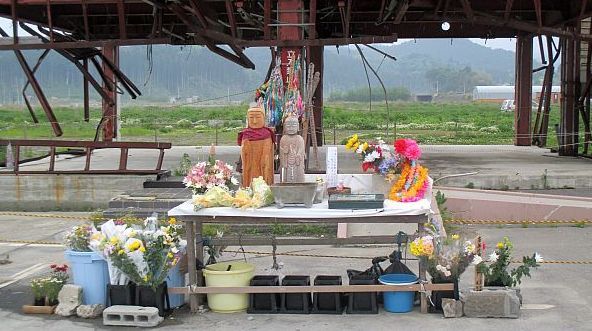 A shrine has been set up at the disaster prevention tower for people to pay their respects. However the council plans to demolish the building. Photo: RNZ / Cushla Norman

The sea is both friend and foe to the town of Minamisanriku. Fishing is the foundation of the economy and the town is famed for its octopus, oysters and scallops.

However, as Insight found out when it visited, because of its hilly topography and v-shaped bays, Minamisanriku is prone to tsunamis.

It has had three major ones since 1896, and the town was prepared for more.

A 4.6 metre seawall and 10 metre high tidal gates were built after the 1960 tsunami which followed the Valdivia earthquake in Chile. But this wasn't enough to protect the town in 2011. 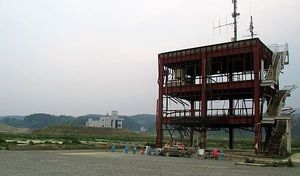 The disaster prevention tower, where the final tsunami warnings were broadcast from. 43 people on the rooftop were washed away and nine survived. Photo: RNZ / Cushla Norman

On 11 March 2011 a tsunami generated by a magnitude 9.0 earthquake damaged and destroyed towns and cities along 600 kms of the Tohoku coast - 18,958 people were killed and 127,291 buildings were destroyed.

The tsunami virtually wiped out Minamisanriku's town centre, and left about 800 people dead or missing. The town is now a bare plain of brown dirt dotted with the odd mangled building.

But progress is being made. A convoy of trucks ferries tonnes of dirt from the surrounding hills to the coastal plain every day. The dirt is being used to raise the land by 10.6 metres.

Across the Tohoku region, 258,000 people are still homeless three years on from the disaster. In Minamisanriku, more than 5,000 people still live in temporary housing. Many of them didn't have costly earthquake insurance.

And so the government is building about 21,000 public housing apartments in the region to be rented to residents according to their income.

The government's reconstruction agency said work has already started on about 70 percent of public housing with the goal to have 80 percent completed by March 2016.

For those who don't want to live in public housing, the government is developing land for them to build on, with residents paying the expensive construction costs themselves.

Mayor of Minamisanriku Jin Sato said the cost of building materials has risen dramatically since the tsunami. 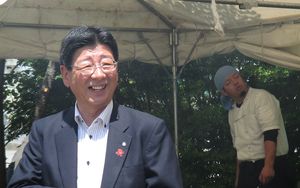 The mayor, Jin Sato, survived the tsunami by clinging to a radio antennae on top of the disaster prevention building. Photo: RNZ / Cushla Norman

He said before the disaster a 30 square metre house would have cost $140,000 to build, but now it costs $475,000. He said people look at this cost and just give up on building their own home and that's a worry for him. 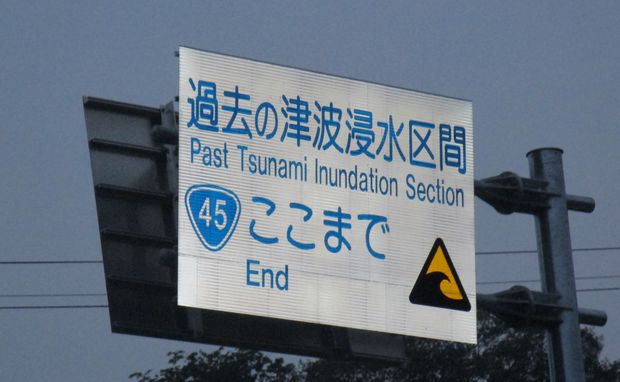 These signs mark the tsunami inundation zone. In most places the waves were at least 10 metres but in some they were 16 metres high. Photo: RNZ / Cushla Norman

Before the disaster Minamisanriku's population was 17,666. Now it has fallen to about 14,000 - although locals fear it could be lower.

Many people, predominantly the young, have left because of what they see as a lack of job opportunities and a lack of progress on the rebuild.

But Mr Sato insists there are jobs, and government statistics back him up. In the Tohoku region there are actually more job offers than people.

However, as an aid worker from the nearby city of Ishinomaki, Akiko Iwamoto, points out, the jobs are in industries such as construction which may not appeal to young people.

Ishinomaki, a city of about 150,000 people just south of Minamisanriku, is facing the same problems as the rest of the Tohoku region - an ageing population, a mass exodus of young people and labour shortages.

Out of the disaster hit regions Ishinomaki has the highest number living in temporary housing - 15,000. Akiko Iwamoto said many of them lead a grim existence with a lot becoming reclusive, staying inside, watching TV and drinking.

She said suicide and divorce rates have jumped dramatically as so much uncertainty hangs over people's lives.

The Japanese government is spending $350 billion on the Tohoku rebuild over 10 years. Its original goal was to have the rebuild finished in a decade. Mr Sato thought this would be possible at first, but now he can't believe there are just six years left. 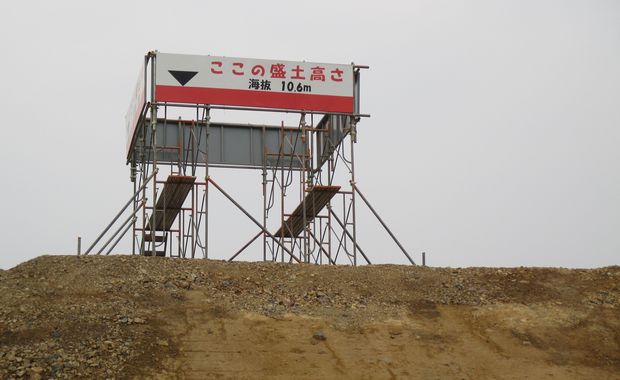 The earthquake caused the land to drop by about 70cm and as a result this low lying area, which was formerly the downtown, floods easily during high tide. Photo: RNZ / Cushla Norman