A teenager who tested positive after attending Soundsplash says 12 of her friends who were at the festival have also contracted the virus, while an Auckland scientist says it could be a superspreader event. 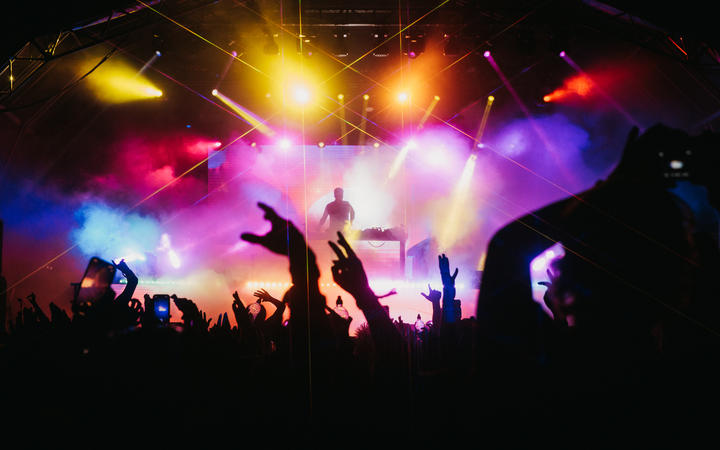 Auckland high school student Emma went for a test on Tuesday, and found out the next morning she had contracted the virus.

"I got tested just as, like, a precaution, and then when mine came back positive I told everyone to get tested, and slowly the results have come back and it's been, like, one out of every three is positive."

Of Emma's 30 or so friends who were at the festival near Hamilton at the weekend, 12 have returned positive results.

The Ministry of Health has not yet told Emma what strain of the virus she has, but she said two of her friends had tested positive for Omicron.

Yesterday, five cases of Covid-19 from the music festival were confirmed by the Ministry of Health, one of which was also confirmed as having the Omicron variant.

Some of Emma's friends who have tested negative will be going for a second test later this week.

The group were camping at SoundSplash in an area she said was restricted from people who had only day passes.

"My vaccine pass was scanned, I had to be fully vaccinated. All the staff were wearing masks. I know that there were the Covid scanners for the tracer app, but I don't think I really saw people use them," Emma said.

An Auckland teen, Amy, who did not want to use her name, was also at SoundSplash.

She and her friends were talking on the day about how likely a Covid-19 case would be at the festival.

"I think everybody knew that it was going to happen. We've seen things with other festivals that it's hard to sort of avoid. As soon as I came home I got a Covid test done just to, like, double check."

"All my friends went [for a test] today after they heard the news. There's definitely a lot going around, there's like different groups, different schools and things like that. And you're sort of getting all the information and seeing if you've been in contact with any of the groups."

A 16-year-old festival-goer from Devonport is part of a 10-person Facebook chat for other attendees from the suburb who also have the virus, his father said.

The Devonport man, who did not want his name used, said his son got tested on Tuesday after getting a fever, and got the positive result on Wednesday.

"Obviously at a concert, you're probably tired so you sleep a bit. But once he got his fever then my wife decided he should probably get a Covid test."

The festival was formally confirmed by the Ministry of Health as a location of interest on Thursday morning, and the father questioned why it was not flagged earlier.

"On Tuesday afternoon he had quite a large group of friends that were all showing similar signs, and had all been to SoundSplash.

"If you were joining some dots on Tuesday afternoon, you would have known that SoundSplash could have potentially been a [location of interest]," he said.

The family is now isolating at home.

Auckland scientist, aerosol chemist Joel Rindelaub said there is a chance that the Soundsplash festival could become a Covid super-spreader event.

"Any time you have Omicron hanging out with you know thousands of people bad things can happen. We do know that transmission risk is decreased outdoors but if there's a lot of close contact it might not matter."

Dr Rindelaub said overseas data indicates that a person is about 20 times less likely to transmit the virus outdoors than indoors, but a music festival where people are sharing tents or watching bands "in a tightly packed area" or mosh pit would increase the risk of transmission.

How long the virus molecules stay in the air is highly variable, particularly outdoors, he said.

"If you do have you know a little bit of room to breath, it should be carried away, that's why indoors you know some of these virus particles can actually build up cause there isn't ventilation, so it'd be highly variable.

"But in a tight cramped place that transmission can happen quickly and we know that with Covid-19 it doesn't necessarily need a lot of exposure, you know it could be in the order of seconds of exposure before you become infected."

In this type of situation being double vaccinated will not necessarily do a lot to prevent transmission of the virus but it will do a good job of preventing hospitalisations, he said.